SA mining companies and how they spend their CSI

During late 2019, Gold Fields was ranked as the top SA mining company on the Dow Jones Sustainability Index (DJSI) database, the firm’s sustainability practices scoring alongside some of the world’s best resources companies. The DJSI measures a range of management practices around environmental, social and governance (ESG) issues, including health and safety, corporate governance, climate strategy, water-related risks, human rights and social impacts on communities. According to the 2019 DJSI scorecard, Gold Fields ranked fourth out of the total 60-plus mining companies assessed, and was named third-best gold company globally.

Gold Fields CEO Nick Holland affirmed the company’s efforts to do the right thing, saying of the ranking: ‘Our continued strong showing on the DJSI illustrates that we are successfully integrating sustainability practices into our business. There will always be areas of improvement, particularly in further strengthening our relations with impacted host communities, but overall I think we are on the right track.’

Gold Fields operates one mine in SA, situated about 45 km from Johannesburg. The local municipality surrounding the mine has more than 270 000 residents, and faces struggles including high levels of unemployment, crime, poverty and food insecurity. In 2018, Gold Fields invested R46.1 million in social and economic development (SED) projects, most of which (75%) went to education and training, economic diversification (17%), and infrastructure development (4%).

For Gold Fields, it’s all about collaboration. The miner works together with the South Deep Education Trust and the South Deep Community Trust to deliver projects best-suited to the needs of its host and labour-sending communities.

A further R3.4 million went to the South Deep Community Trust, where it was used for community safety initiatives, and enterprise and SME development.

Impala Platinum (Implats) places a firm focus on boosting education through its CSI, which it does with bursaries, learnerships and school support projects. Indeed, education takes the lion’s share of Implats’ social investment spend in SA and accounts  for 43% (R38.2 million) of its 2019 social investment. Through its school infrastructure upgrade project, the company undertook to overhaul facilities at Berseba and Dimapo primary schools, both located in the North West province. This was in addition to other school infrastructure projects carried out during the year, such as the expansion and renovation of the historic Karabo crèche and early development centre in Marula (North West), and the upgrading of facilities at Tswako Mohlala Primary School (Limpopo).

The company’s School Support programme, meanwhile, works to boost what it deems the four major contributors to quality education: school facilities, academic quality, leadership development and social skills development. The programme provides management support for principals, sports coaching skills for teachers and learners, and mentorship for educators. It currently assists 10 schools, including the Platinum Village combined primary and secondary schools in Rustenburg, which Implats built in partnership with the North West Department of Education and the Impala Bafokeng Trust.

Pierre Jordaan, VP for integration at Sasol Mining, says the company has adopted a multi-pronged, multi-year, integrated approach to its social investment. ‘Sasol Mining takes local economic developments very seriously as it affords the company an opportunity to promote economic growth, as well as employment, with the aim of advancing social and economic welfare of all South Africans,’ he says.

Environmental preservation is a key priority for Sasol Mining. Through its envirowaste programme, 10 000 households in eMbalenhle and Leandra have been trained in waste-management methods, and many individuals have learned how to manufacture furniture out of waste materials. In addition, 10 vegetable gardens have been established. To date, more than 2 768 tons of waste have been collected and processed in the region. The programme also aims to tackle socio-economic issues within the community through skills development in the recycling sector, a nutrition programme (through the establishment of vegetable gardens), and enterprise development of businesses within the waste-management sector. 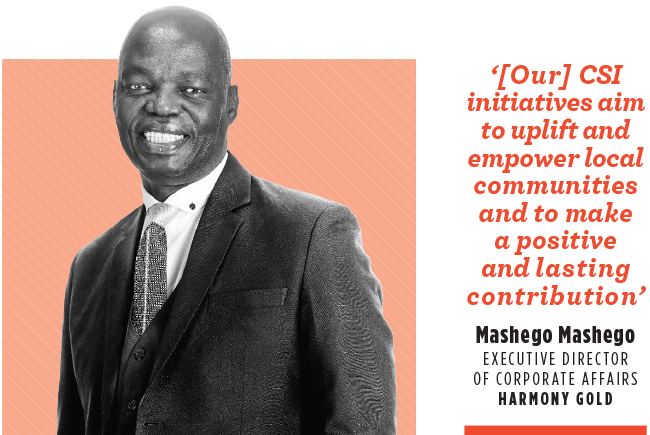 Another of the company’s major initiatives is a housing programme that enables general workers, operators, miners and artisans who have previously not qualified for a government subsidy or mortgage bond to become homeowners. Established in 2015, the first houses were handed over to first-time homeowners in eMbalenhle in February 2016. To date, Sasol Mining has managed the construction of 231 such houses in eMbalenhle, Secunda and Sasolburg.

‘The promotion of homeownership forms part of Sasol Mining’s broader transformation goals to ensure that the areas in which the company operates benefit from its presence, and that it leaves a positive legacy by fostering long-term, sustainable development,’ according to Jordaan.

During the 2019 financial year, Harmony spent R7 million on CSI projects, focusing on educational support programmes, sports development, arts and culture. ‘Harmony’s CSI initiatives aim to uplift and empower local communities and to make a positive and lasting contribution in the regions in which we operate, including labour-sending areas, specifically Lesotho and the Eastern Cape,’ says Mashego Mashego, executive director of corporate affairs at Harmony.

Mashego highlights the company’s sponsorship agreement with the South African Agency for Science and Technology Advancement as one example of the CSI work it does. ‘Harmony’s contribution addresses human capital development in South Africa, especially in the critical areas of science, engineering and technology,’ he says. Since 2009, Harmony has contributed more than R17 million to the programme.

‘When people are empowered they are equipped with skills and knowledge with which they will be able to earn a living. In  this way, they are able to get paid employment or start up a business and earn an income,’ says Mashego. ‘Earning income is the first step towards poverty eradication. Corporates need to focus more on helping marginalised groups such as women, persons with disabilities and elderly people to develop income-generation activities.’

Glencore South Africa, which has a strong presence in the coal and ferroalloy sectors, has organised its sustainability strategy into four pillars: health, safety, environment, and community and human rights. According to Shivani Chetram, head of communications, the company undertakes a socio-economic assessment every three years, meeting the community to identify and address their priority needs, and then directs its spend accordingly. 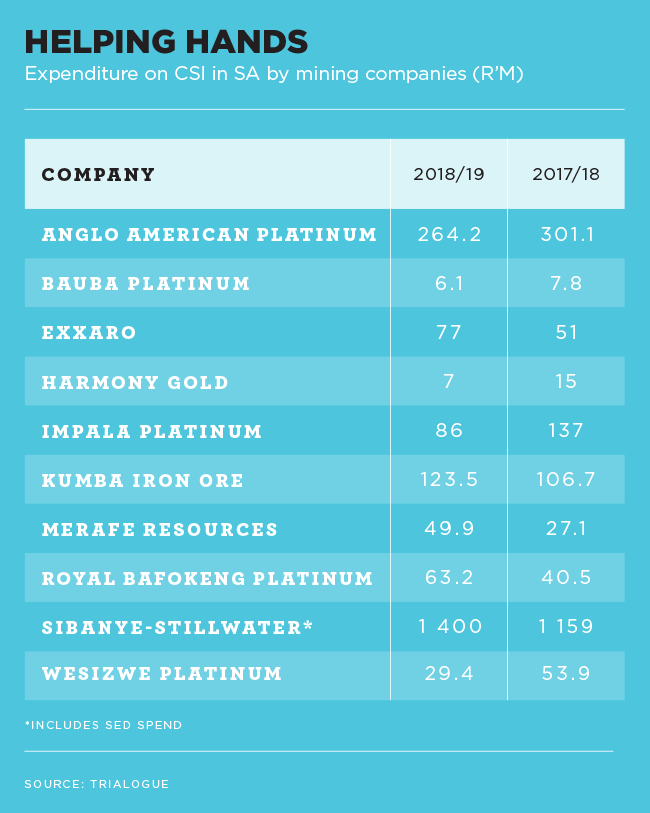 Some of the initiatives supported by Glencore include the Mashishing Campus of the Ehlanzeni TVET College, the Tweefontein water reclamation plant, the provision of a water-saving soccer pitch at Lekwakwa Primary School in Rustenburg, an e-learning project in Mpumalanga to bolster the science, technology, engineering and maths fields, eye-screening tests at underprivileged schools in Mpumalanga, the donation of two mobile classrooms to schools struggling with overcrowding, and the establishment of an artisan training centre in Sekhukhune, in Limpopo.

From 2013 to date, Glencore Coal has contributed approximately R133 million through its CSI budget. This is in addition to what the company has spent on local economic development initiatives over that same period (R231 million).

Mining houses Anglo American and Exxaro, along with the CSIR and World Vision South Africa, launched an initiative in October 2019 called the Impact Catalyst, which aims to drive large-scale, socio-economic development initiatives in Limpopo.

According to CSIR strategic partnership manager Charl Harding, Limpopo was chosen as the ideal starting point for the Impact Catalyst because the province’s heavy dependence on the mining sector makes it very vulnerable. This necessitated different thinking for job creation and sustainable development, he says.

In addition, several feasibility studies and pilot programmes are already under way in the province, such as integrated game farming, agriculture, agro-processing and biofuels, waste recycling and community-health initiatives.

Future projects are expected to include an ESD programme to help build small businesses that can supply goods and services to mines and businesses, and an integrative geospatial planning capability.

‘It gives us a chance to be directly involved in charting a new path for the future of mining host communities and regions. We do not have all the solutions but we are ready to get involved.’