IoT, AI and other technology in SA mining

Standing in the Wits Sibanye-stillwater Digital Mining Laboratory (DigiMine), surrounded by next-generation technologies, Fred Cawood has a pretty clear idea of how the future of mining might look. The one-of-a-kind laboratory, housed in the converted Chamber of Mines building on Wits University’s west campus, explores the possibilities of transferring surface digital technologies into the underground environment. As director of the Wits Mining Institute, Cawood has a front-row seat to this bold vision – and an early glimpse – of how mines will operate in the future. So when you ask him what new innovations he expects to see in the mining industry five or 10 years from now, you expect him to take you on a deep dive into automation, or big data, or the internet of  things (IoT). But his response is not one you’d anticipate. The honest answer, he shrugs, ‘is that things are developing so quickly that we don’t know what’s coming next’.

To see 10 years ahead, Cawood suggests looking 10 years back. ‘A decade ago there was a push for mining companies to adopt technology,’ he says. ‘Now that has changed completely. Now there’s a pull, where the companies are saying, “You know what? We’ve installed this piece of technology, but now we actually want this and that and that as well.” Mining companies have become very specific in their requests or demands for what these systems must be able to deliver. It’s specific from mine to mine, depending on the unique needs of each location.’ This shift, says Cawood, is a very good thing. ‘Innovation is now at the rock face, so to speak. It’s no longer born in a laboratory before going to the mine. Now the system is installed in the mine. That makes it difficult to see what that “mine of the future” will look like.’

Of course, we have a few ideas. Anglo American, for example, has a well-established drone fleet, which it uses for safety, surveying and security. ‘Drones are an important part of our drive to remote-control many of our mining activities while gathering enhanced data and real-time operational performance metrics,’ the company notes in its 2018 annual report. ‘They provide rapid visual access and multiple views, with smaller drones being used to inspect confined spaces on mines and in processing plants, while bigger aircraft are able to fly at night and stay aloft for up to eight hours.’

In Australia, Melbourne-based Newcrest Mining is working with Microsoft and Insight Enterprises to roll out cloud, AI and IoT technologies at its underground Cadia Valley gold mine in New South Wales to monitor and manage crushed-ore bin levels. Newcrest is also using Microsoft Azure to extract data from 100 000 machinery sensors, and approximately 40 billion records, from across its international mine sites in Australia, Indonesia, Papua New Guinea and Canada.

Meanwhile Resolute Mining recently announced the development of a hybrid modular power station at its Syama gold mine in Mali. By combining solar, battery and thermal generation technologies in a single integrated power solution, Resolute aims to achieve long-term electricity cost savings of up to 40%, while cutting its carbon emissions by about 20%.

And so the list goes on, with mining companies in SA and abroad exploring the possibilities of digital tech, running pilot programmes and steadily improving safety and efficiency. For Cawood, the biggest innovations in mining won’t necessarily come from any single area – drones, IoT, big data, hybrid energy and so on – but rather in how mining companies change their workforces.

‘Where I see the biggest innovation coming is in the area of training and qualifications. All of a sudden you need to keep up with technology systems that are demand-driven from the rock face. So your training has to become very specific. And because most of these systems have the ultimate objective of mining from the top of the mine, the training of designers and engineers will have to be fundamentally different. You’ll now need  to incorporate an understanding of ICT into mining engineering qualifications and training.’

Manish Chawla, IBM’s global MD of energy and natural resources, touched on this at the 2019 International Mining and Resources Conference (IMARC) in Melbourne, saying that mining’s new digital phase will require a more agile, diverse and multi-disciplined workforce. ‘We expect AI and automation will change 100% of jobs,’ he said. ‘Not necessarily replace them, but definitely change them.’ 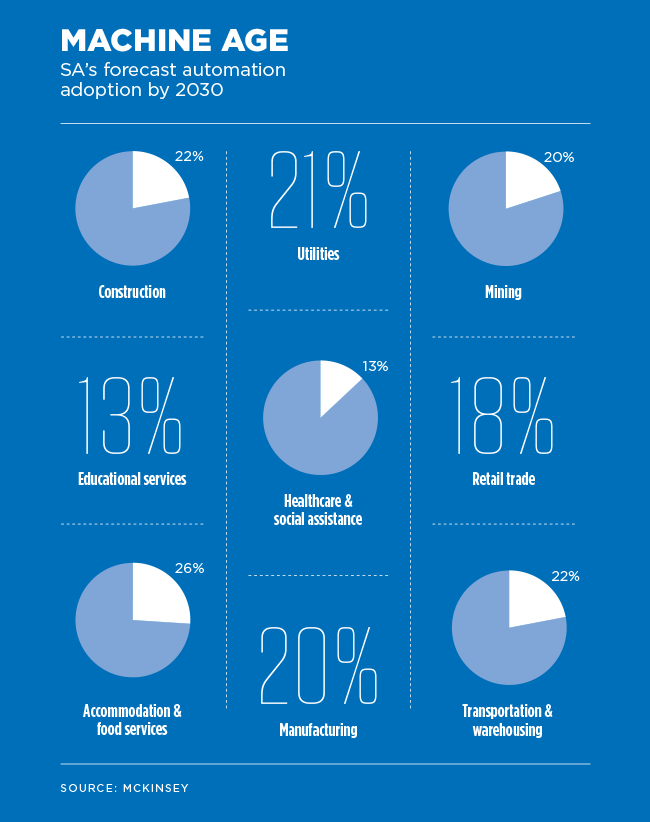 Pointing to a recent IBM study, Chawla noted that most executives admit their organisations and countries are not yet prepared for the reskilling that’s required. ‘It is clear that skills are on the top of the agenda for all CEOs,’ he said. ‘But skills availability and quality are in jeopardy. The half-life of hard skills continues to shrink (now estimated at three to five years), while the time it takes to close a skills gap has ballooned 10 times in just four years.’

This echoed what SA’s Minister of Energy and Mineral Resources Gwede Mantashe said at the 2019 Mining Indaba in Cape Town. ‘The question of technological change in the industry is a new factor. We are not going to create the same type of jobs; the likelihood is that we are going to create new types of jobs. The industry […] must position itself to be part of change.’

Cawood has an idea of what that change will look like. ‘It’s very interesting for technicians especially, because you can only install these rock-face systems underground,’ he says. ‘That means your technician training will have to be for a highly advanced system in an underground context, where the environment makes wireless communication more difficult. So you’ll need to understand the communication system: how it behaves in different temperatures, in different environments, at different moisture levels, and so on. All of those factors must be considered in training.’

Digging deeper, Cawood explains that the maintenance of remote underground monitoring systems can often be done from the top of the mine. This means that artisan training – which is currently focused on the machine itself – will have to be more focused on how you maintain the machine remotely. How do you get the data from the machine to make sure that it doesn’t break down before its next scheduled maintenance? How do you monitor tyre pressure remotely? ‘All of that is very different, and everything is being turned around,’ says Cawood. ‘Your technician training will now have to be closer to the machine than your artisan training.’ 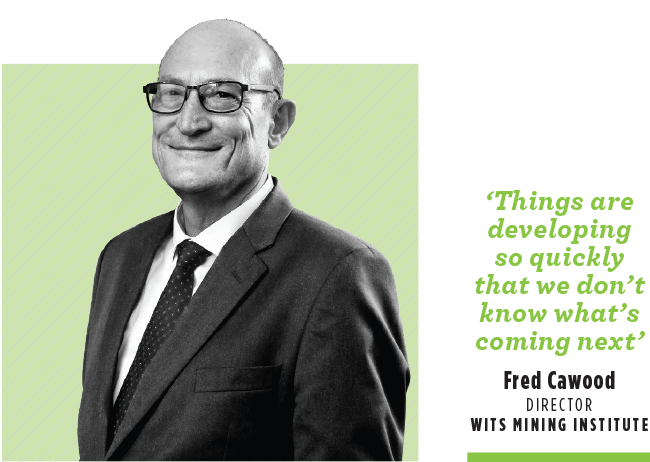 Throughout all of this upheaval, mining companies have to act – and they have to act quickly because these transformative technologies are all being developed outside of a mining context. Whether you’re talking about Anglo’s unmanned, remotely piloted drones, Newcrest’s cloud-based IoT sensors, or Resolute’s hybrid energy projects, any of those could have been – and are being – applied in other industries.

Self-driving vehicles, AI, big data… You don’t have to be a mining company to use or advance these technologies.

‘It’s interesting how long the mining industry stood still,’ says Cawood. ‘Now, all of a sudden, there’s been this explosion of technologies. Initially some mining companies were reluctant to install systems that were not proven in the underground context, but now that’s changed, and everybody must keep up. But at the end of the day, all of these systems require people. You need people on the mine to design the systems, install the systems, maintain the systems, and then to interpret the data that’s coming out of the systems. That, I believe, is where the innovation will happen in the next five to 10 years.’

The systems are changing anyway. To prepare properly for the mine of the future, mining companies will not only have to wrap their heads around the possibilities of these emerging innovations; they will have to – as Cawood puts it – ‘change the way they build their people too’.