It’s been two years since the JSE introduced the JSE Black Stockbroking Firms Enterprise Development Programme in collaboration with the Black Brokers Forum. It has contributed a cumulative enterprise development assistance of some R16.6 million to black brokers during this time, with R6 million of that disbursed in 2018 alone.

Despite this contribution, the JSE maintains the growth of black stockbrokers remains slow. Langa Manqele, the JSE’s Manager: Equities and Equity Derivatives, Capital Markets, believes there are a number of reasons for this. ‘On the one hand global events are impacting on South Africa, such as the current emerging markets rout that began in Argentina. On the other, domestic market dynamics are frustrating the growth of even established firms in varying degrees.’

The JSE is, however, not alone in its efforts to see black stockbroking firms play an increasingly more meaningful role in the economy. The Public Investment Corporation (PIC) has announced that it allocated R100 billion to black asset managers as it grew assets under management to R2.08 trillion in 2018. In its 2018 annual report, the PIC stated that R103.4 billion – 60% of externalised assets – was managed by firms with 51% (or above) black ownership, across domestic assets.

This is important to the JSE, says Manqele, because the PIC allocations demonstrate the latent power of the large buy-side participants, which are asset managers, in effecting meaningful transformation. ‘This also matters because it illustrates the intrinsic dependence of sell-side – the stockbrokers – on the buy-side to provide flows.

‘What we can surmise from this is that, along with other market participants, like the Association for Savings and Investment South Africa [ASISA], there is little doubt that the market is doubling its efforts with each passing year.’ 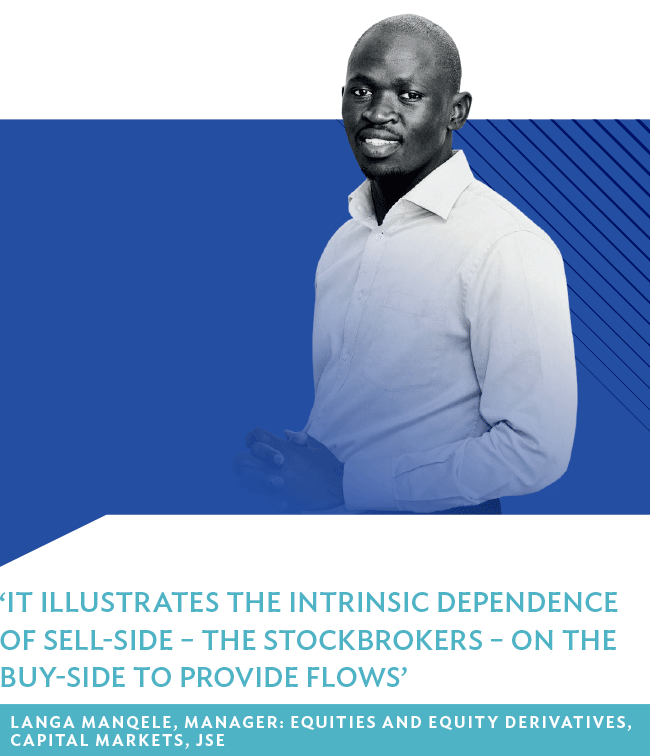 The challenges to speed things up are fairly complex and fluid, says Manqele. ‘They demand a collaborative and co-ordinated programme with a high level of clarity on a set of incentives for emerging firms, the genuinely small black stockbrokers and the established firms that are either black-owned or empowered.’

He says this calls for striking a delicate balance within the framework of the prevailing Financial Sector Charter and co-creating a transformation programme that lives up to the expectations of the market in its entirety.

In this vein, the JSE has begun exploring ideas. It is, for example, in talks with emerging black stockbrokers to investigate commercially viable and risk-resilient solutions on capital adequacy requirements. It has also opened up a direct line of communication with the Financial Sector Charter Council, aimed at positioning the JSE as a primary co-ordinator and a representative of the stockbroking community on matters related to transformation.

Currently the JSE Black Stockbroking Firms Enterprise Development Programme supports 16 majority black-owned firms with a revenue turnover of less than or equivalent to R100 million, and a market share of up to 5%. The programme is open to all qualifying JSE equity market members. These black firms benefit from fee waivers, such as connectivity fees, which replace the membership fee, on a quarterly basis, ‘in arrears’.

Another fee waiver allows members to trade in a single equity security as a principal with another member who trades either as an agent on behalf of a client, or as a principal for that member’s own account. While these and other such benefits are attractive, only two members have been added to the programme in the past year.

‘What we need are more champions like the PIC, ASISA and the JSE to come on board,’ says Manqele. ‘Transformation of the stockbroking industry can only be effective and fast-tracked when it is directly linked to positive changes and/or decisions made in the asset management industry.’