An entrepreneur isn’t simply someone who owns a business; it’s someone who makes things happen. Someone who acts as a change agent by innovating and disrupting. Someone who creates jobs and drives economic growth, and as such is desperately needed in SA – a country in the midst of political change and economic uncertainty, trying to claw its way out of the technical recession into which it slipped in the second quarter of 2018.

The majority of JSE-listed and other large companies in SA have realised that their businesses don’t operate in isolation and that, collectively, the private sector will only thrive when the broader society and economy are also healthy. Corporate support for budding entrepreneurs therefore begins as early as in the ideation phase (for example, the Standard Bank Incubator programme and the General Electric Africa Innovation Centre) and takes them through the start-up and early stages, such as Engen’s Pitch & Polish, the nationwide entrepreneur competition and workshop; RMB’s AlphaCode for fintech entrepreneurs; Afgri’s Harvest Time Investments for emerging farmers; and Sasol’s ChemCity Business Incubator for SMEs operating in the chemicals, energy and related sectors, among others.

For many of these blue-chip companies, this leads to the successful integration of entrepreneur development into their value chains. The more visionary companies now consider their enterprise and supplier development programmes to be strategic drivers in their operations, using the skills and resources that these (primarily black-, women- and youth-owned) SMEs bring into their value chain. Corporate efforts towards actively supporting entrepreneurship and ESD are especially important during uncertain economic times.

‘It is precisely at the nexus of uncertainty and opportunity that entrepreneurship takes place,’ Boris Urban, professor at Wits Business School, writes in the Conversation. ‘According to the traditional neoclassical view, entrepreneurship is the “mystical” element that delivers external shocks to a state of equilibrium in the marketplace by introducing new products and services.’ 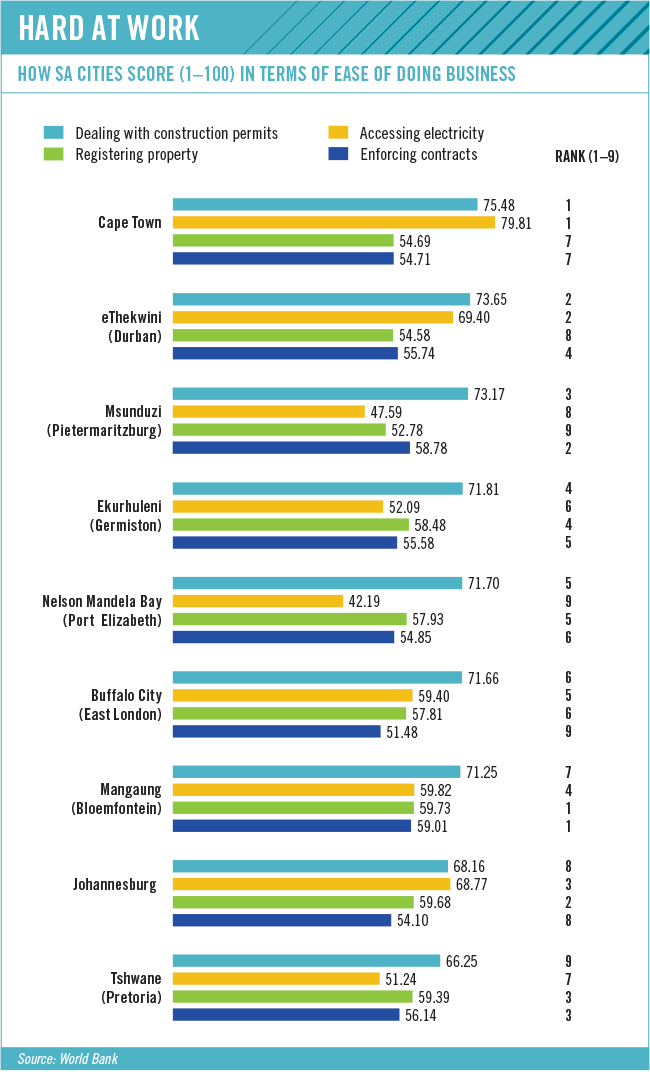 Despite its shortcomings, SA is an entrepreneurial leader in sub-Saharan Africa and has a much better developed entrepreneurial ecosystem than other African countries, for example, Nigeria, Egypt and Ghana, according to a joint report by the Allan Gray Orbis Foundation, the SAB Foundation and the Global Entrepreneurship and Development Institute. ‘South Africa is stronger than most of its peer countries in competition, product and process innovation. South Africa does not necessarily need more entrepreneurs; it needs better, innovative and growth-oriented entrepreneurs that are motivated to grow and prosper within the South African environment and through engagement with the global economy.’

In line with this, the Seed Academy’s Real State of Entrepreneurship Survey 2018 report recommends industry collaboration in order ‘to focus more on the successful entrepreneurs who can impact the industry and create massive employment, as opposed to focusing on many qualifying small enterprises and exempted micro enterprises developed in isolation’.

This ‘quality over quantity’ thinking resonates with Mikael Samuelsson, associate professor and entrepreneurship expert at the UCT Graduate School of Business. ‘The idea that everybody should be an entrepreneur is flawed. It’s a sensationalist notion,’ he says. ‘The odds of just anybody doing more than merely surviving financially as an entrepreneur are close to zero. Besides, necessity entrepreneurship has little to no impact on economic development. The only type of entrepreneurship that has an impact is high-growth potential entrepreneurship.

Many entrepreneurs simply don’t know where to find that support, be it for their business idea that needs incubation, their start-up or expansion finance, business training, mentorship or access to markets. However, they are spoilt for choice – at least on paper.

The map is a useful tool for identifying finance options (which can be provided directly by government and development finance institutions; fund managers; venture capitalists and angel investors; private equity; specialised finance; as well as crowdfunding). After all, accessing funding remains the biggest concern and challenge for entrepreneurs, according to the Seed report. 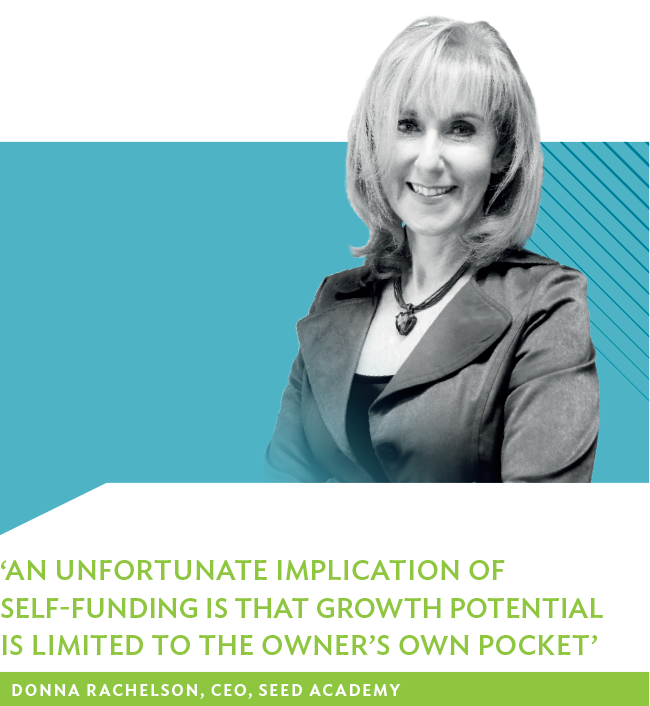 ‘Entrepreneurs are largely self-funding and not applying for funding because they either don’t know where to go or don’t know how to access funding,’ it states. ‘While 73% of entrepreneurs require funds to grow their business, 28% require less than R10 000, and 30% needed less than R50 000. It is evident the risk appetite for funding early stage and perceived “risky” entrepreneurs is low in South Africa.’

According to Donna Rachelson, Seed Academy CEO, ‘an unfortunate implication of self-funding is that growth potential is limited to the owner’s own pocket and diminishes the ability for a small business to increase capacity, hire more staff and make a more meaningful impact on the South African economy’.

The ANDE map tells entrepreneurs clearly what type of support is available from which organisation for each business phase (from ideation, start-up, and early-stage to expansion and, eventually, the growth phase). The network’s key findings indicate some positive trends: an increase in support and in the active ecosystem as well as a rise in corporate support. But on the downside, the report notes an early-stage funding gap; that the available support is ‘fragmented’; and that there is a greater need to measure impact and improve the co-ordination between initiatives.

Disappointingly, the Seed report concludes that SA’s entrepreneurs are currently not thriving. ‘Revenues are not increasing significantly, and they are not growing at a level and pace that will significantly impact the National Development Plan. Entrepreneurs are employing between two to four individuals on average. This is supported by the 2018 Global Entrepreneurship Monitor study where South Africa is ranked seventh out of 54 nations with respect to job creation propensity.’

When it comes to corporate-sponsored ESD programmes, the report notes that these rarely add the necessary relevant inputs to entrepreneurs’ businesses – unless they are niche, specific and tailor-made. Mentorship is, however, a key success factor.

‘The number of entrepreneurs who were surveyed and have mentors through their ESD programmes is low, yet overwhelmingly those who had mentors linked through programmes believed that the mentors added significant value to their businesses,’ it states.

Israel Noko, NPI Governance Consulting CEO, reiterates the importance of support for entrepreneurs, especially those trying to move to the next level of development.

‘They should never try to work on their own,’ he says. ‘Small business owners tend to feel that they need to have all the answers and that they must do it themselves, and that no one else can do it better than themselves. They don’t understand that at some point they need to relinquish some of those responsibilities, and part of this process involves letting go of some of the decision-making to a team of strategic advisers.

‘One of the things that I would advise any entrepreneur to do if they are going to put together either a board of directors or a group of advisers is to have at least three types of people – someone who understands the world of finance; somebody who has very good business and operational experience; and a good lawyer. Once you’ve got that, you’re in relatively able hands.’