After more than a decade in corporate law, Cézanne Britain decided to open her own boutique law firm in 2015. ‘My growth and journey had led me to a point where I needed to work for myself,’ says the young lawyer, who left her position as a partner at Cliffe Dekker Hofmeyr to start a microenterprise consisting of ‘just myself, my laptop and the knowledge that I have’. Her bold move has paid off. In July, after only 18 months in business and having hired an associate and a consultant, Britain was named ‘Emerging Entrepreneur of the Year’ for the Gauteng region by the Businesswomen’s Association of South Africa.

It is one of very few recognitions in the country that focus exclusively on women in business. ‘Being a woman – a black woman in particular – can be challenging at times,’ says Britain. ‘It keeps you out of the boys’ club that is still prevalent in the legal profession. The only way to be recognised if you don’t belong to that club is through high-quality work and consistent delivery. But on the other hand, clients soon realise that a woman can be the “real deal” without having to play up to her femininity.’

Britain is part of a hand-picked group of young, black entrepreneurs who form the first intake of the Impande Supplier Development Programme that was recently launched by Kagiso Tiso Holdings (KTH), a black-owned and -managed investment holding company.

‘Impande is a two-year programme in which more than half the beneficiaries are black women-owned small businesses,’ says Theresa Griffiths, KTH head of marketing and CSI. ‘We don’t offer any funding at this stage but focus on personal mentorship and tailor-made support in branding, sales and marketing, business development as well as access to market.

‘Striving to shift our procurement to small black-owned businesses, we asked an enterprise development firm, Raizcorp, to source and develop SMEs for our own supply chain and that of our broader group, including our investee companies and other stakeholders. The small businesses in our programme will be able to tap into a network of other service providers within our framework.’

The development of emerging SMEs – with preferential focus on those owned by women, youth and the disabled – has become a priority of the private and public sectors in driving broader economic growth.

‘It is through small business that we really want to radically change the trajectory of our economy. We place the hopes of our nation on a thriving inclusive economy on the success of small business,’ Deputy President Cyril Ramaphosa told a business incubation conference in March. Meanwhile, Small Business Development Minister Lindiwe Zulu underlined the significance of women in the SME sector. ‘Small and medium enterprises have an important role to play in the economic transformation of our economy and in particular for women, because once women have economic independence then they are able to take the right decisions even more for their families and society in general.’

A large body of international and local research shows the positive multiplier effect that female entrepreneurs have on poverty reduction as well as health and education. For instance, women are likely to reinvest 90% of their earnings into their families while the average for men is only 30% to 40%.

Another study, involving female farmers – who are essentially rural entrepreneurs – found that agricultural yields would increase by 20% to 30% worldwide (providing food for up to 150 million people) if women farmers were given the same resources as their male counterparts.

Closer to home, an SA study revealed women-owned SMEs to be more profitable than those owned by men. The SME Survey 2014 found that 15% of female-owned SMEs were ‘strongly profitable’ and 63% ‘just profitable’, compared to 20% and 49% respectively for male-owned enterprises.

While this result may seem like a big win for women, it comes with an immediate qualifier: the level of female ownership is exceptionally low, says Arthur Goldstuck, MD of research firm World Wide Worx, which conducted the survey. ‘There’s a massive gender imbalance in entrepreneurship. This tells us that women are not given enough encouragement or support to become entrepreneurs.’

In SA, most small businesses are surviving, not thriving, according to the 2015 SME Growth Index because they are hampered by burdensome regulations, followed by a lack of skills, unfavourable local economic conditions and the high cost of labour. 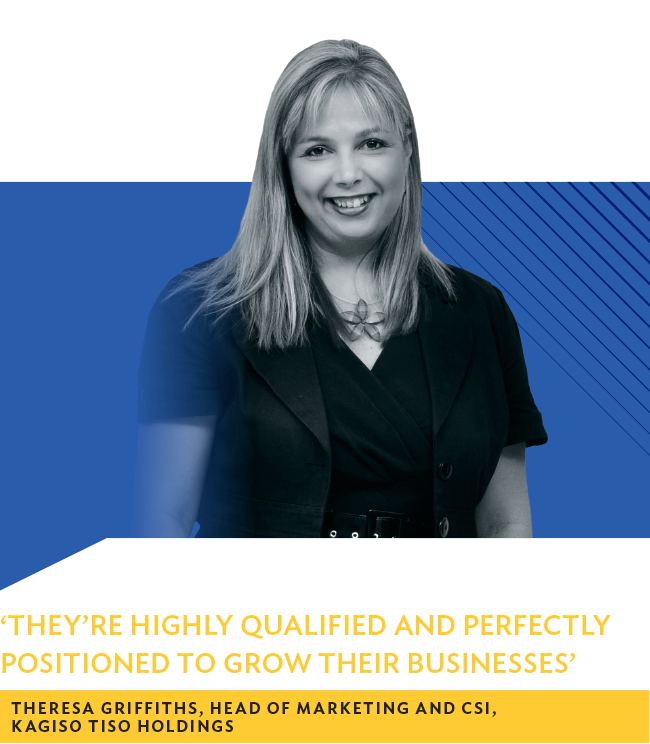 ‘The ratio of female to male TEA [total early-stage entrepreneurial activity] is also substantially lower than the averages for both the Africa region and for the efficiency-driven economies.’

This scenario may improve as access to finance and support for women-owned start-ups and SMEs are broadened.

The Old Mutual Masisizane Fund, for instance, is a non-profit initiative for enterprise development that assists SMEs in capacity building, skills development, access to market and financial education.

Examples of initiatives aimed exclusively at empowering female entrepreneurs include the Department of Trade and Industry’s Isivande Women’s Fund, which is managed by the Industrial Development Corporation and provides start-up funding, business expansion, business rehabilitation, franchising and bridging finance of up to R2 million.

Meanwhile Absa’s Women Empowerment Fund provides loans ranging from R50 000 to R3 million to SMEs whose major shareholder is female in addition to being fully involved in the day-to-day running of the business.

On the corporate front, the revised BEE codes have deepened the commitment to enterprise and supplier development (ESD). Many companies offer ESD programmes – such as KTH’s Impande – to earn BEE points while strengthening their own supply chain through black- and women-owned SMEs. This can be done by way of preferential payment terms, low-cost or interest-free loans, product development as well as marketing and business management guidance.

The flagship Women in Maize partnership between SABMiller and the Agriculture Research Council seeks to empower 5 000 black women-owned maize farming co-operatives by incorporating them into the brewery supply chain. Spin-offs include improved food security, skills development among female farmers and a boost for the rural economy through procurement from local suppliers. 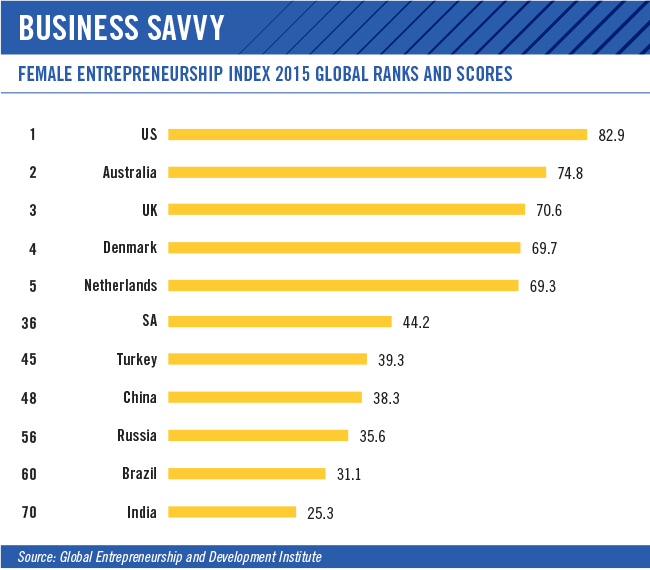 Another successful example is Anglo American’s Zimele Fund, which places a strong emphasis on female-owned SMEs and offers funding as well as post-investment management support and linkage to the mining supply chain.

Retailers such as Woolworths are also actively developing black- and women-owned enterprises through their ESD programmes. In addition, the more than 40 emerging suppliers in Woolworths’ programme have to comply with the retailer’s ethical principles as they join the ‘good journey’ towards environmental and social responsibility.

‘Our relationship with suppliers has enabled us to successfully implement programmes like Farming for the Future and Fishing for the Future,’ Woolworths states in its latest annual report. ‘Beyond these sustainability initiatives, our suppliers engage with us on issues such as timely payment and favourable terms, infrastructure and logistical support, resource efficiency and research support.’

Being part of a corporate supply chain is a ‘big ticket’ advantage for an SME as it provides instant access to potential clients, according to Britain. As one of the perks of the Impande Supplier Development Programme, her corporate law practice in Rosebank, Johannesburg, has become one of the recognised service providers in the KTH Group.

‘The programme has helped me to challenge my way of thinking and redefine my goals,’ she says. ‘It’s not only guidance on the financial aspects, the nuts and bolts of the business, but it really offers that personal development.

‘For me, I want to achieve growth – multi-faceted, multi-levelled growth.’ Like others involved in the programme, Britain has been approached with offers of corporate employment.

‘It may be tempting to receive a monthly salary instead of having to worry about business risk and cash flow issues,’ says Griffiths. ‘But I hope our entrepreneurs have the guts to stick it out because they are all highly qualified and perfectly positioned to run – and grow – their own businesses.’