Tech is big – and it’s about to get bigger. In its recent Entertainment and Media Outlook report, consultancy firm PwC forecast that, in SA alone, ‘the next five years will see a surge in smart devices, with smartphone connections more than doubling from 22.8 million in 2014 to 52.3 million in 2019 and active tablet devices rising from 2.6 million to 5.6 million over the same period. Mobile internet penetration, meanwhile, will have risen more than 32 percentage points from 2014 to 2019, reaching 69.1% in the latter year’.

The volume of devices, however, is only half the story. The other half is the explosion in disruptive innovation, namely applications and systems that are constantly rebooting our ICT infrastructures – and resetting our notion of what’s possible with technology. Just ask Arup South Africa. An independent international design firm operating in the built environment, Arup is now able to use building information modelling (BIM), a process that allows them to generate and manage digital representations of their various projects.

‘Additionally, this information remains pertinent for the life of the building, which is showing substantial savings throughout the process from design through to facilities management, ultimately improving design, performance and reducing risk throughout the construction and finance management aspects of the project.’

It’s a departure from conventional construction modelling, where disciplines work in isolation, operating from their own traditional 2D or 3D ‘linear’ drawing processes, often unaware of changes and ramifications of a change from other disciplines until these become both costly and often unable to be accommodated due to time and associated costs. Illustrating the value of BIM compared to conventional processes, Karassavas describes each element of a building as a virtual Lego block.

‘Each discipline attaches its required metadata or “recipe” to that block,’ he says. ‘It could be photometric data, electrical design specs, procurement costs and information, style, colour, installation time, etc. This data is inserted directly into or associated with the 3D BIM model, and the “block” shows up any co-ordination issues, such as a column blocking the light or an air-conditioning outlet in the same space. It also relays the required associated data such as the quantity required, power requirements and other pertinent information required by the different players involved throughout the process, from design through to construction and then onto facility management.’

In this digital environment, Karassavas says, ‘it’s the model that carries/references the associated truth. And because it is a BIM-based 3D model, being able to accurately analyse and design elements into an accurate project plan removes the traditional delays and inconsistencies caused by many traditional means. 4D sequencing also then allows for elimination of waste and overlapping construction sequencing’.

For Arup’s clients, the savings come not only in the initial design and construction but carry on through to the building’s lifecycle management, maintenance and performance costs.

‘The BIM model can go so far as to identify any elements of a building – right down to the level of equipment – and associated asset registry tag if required,’ says Karassavas. ‘Now if someone moves office, you simply move any associated element on the virtual plan, and all asset management data is updated live. It’s long overdue and exciting. Virtual reality lenses will enable us to “see” the 3D model on a table, as it would appear from the ground and allow us to unpack and rebuild without any costs to produce the optimum building. These 3D models will eventually be stored in the cloud and will make future additions or alterations so much simpler.’ 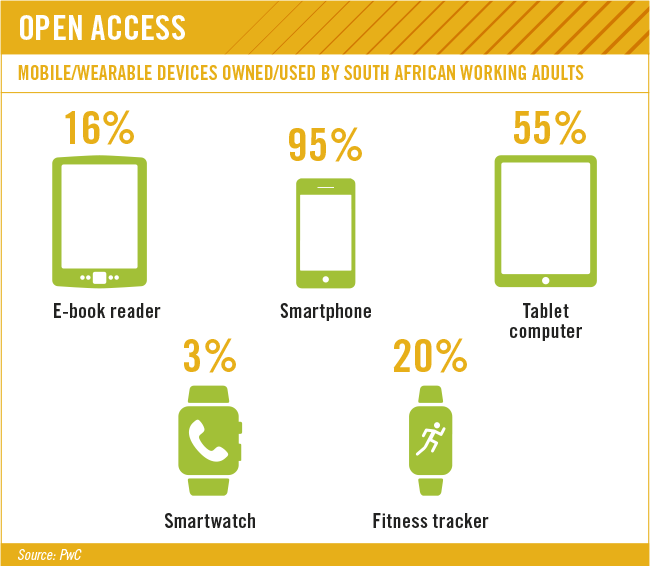 BIM is one example of a piece of disruptive technology that’s rewriting the rulebook for one industry. Now expand that into multiple innovations across multiple industries, with millions of people using millions of connected devices … and you’ll get some sense of the current state of the ICT sector.

‘That’s what makes it exciting,’ says Preeta Bhagattjee. ‘Ten years ago social media, electronic signatures and transactions via phone were things that people thought would only happen in the far distant future. These disruptive changes are challenging – and sometimes unnerving for our clients – because you have to constantly be on top of it all.’

Bhagattjee is national head of the technology and sourcing practice at legal firm Cliffe Dekker Hofmeyr (CDH). Her work puts her at the coalface of the ICT industry, and she and her team at CDH are constantly recalibrating their approach to stay ahead of those changing technologies. ‘What’s always been a challenge from the point of view of assessing risk in the ICT sector is how to build flexibility into your contracting,’ she says. ‘This is even more relevant now because of the very fast rate of change in technology, and in its commercial applications. These “disruptives” are changing the old way of looking at risk, both commercial and legal. Some of the challenges are regulatory but – more fundamentally – it also changes the thinking around contracting.’

Part of the challenge, says Bhagattjee, is keeping pace with regulatory changes. She adds, however, that ‘it’s also about the fluidity of change in the way services are being provided. In the past, outsourcing deals were done for five years or even 10 years.

‘That made sense at the time, because you got pricing benefits. But now suddenly, two or three years later, that same service can be done at a fraction of the cost. Innovation can make a huge difference. Because of the rapid changes in IT, big, monolithic outsourcing deals are becoming less commercially and technically viable. We’re seeing a whole rethink on contracting approaches, with contracting becoming more complex, and with a move away from inflexible commercial arrangements.’

Cloud computing is another of Bhagattjee’s ‘disruptives’, as it brings with it potential regulatory issues, along with commercial and technical risk. ‘The first questions clients ask are “where is my data sitting?” and “is it secure?’’,’ she says.

‘Cybersecurity is one of the most important issues for every business right now, because cybercrime is a reality. It was one of the top issues discussed at Davos earlier this year.’

For Marius Burger, cloud, application and mobile (CAM) executive at tech consultancy Mint, cloud computing is top of the agenda. ‘The modern computer is moving towards cloud-based applications, not only for more processing power, flexibility and scalability, but also because of security,’ he says. ‘Look at Azure, the Microsoft cloud offering with the largest compliance portfolio in the industry – it is almost impossible to replicate this kind of compliance in any corporation’s own data centre. That’s what makes the move to the cloud so much more cost-effective. 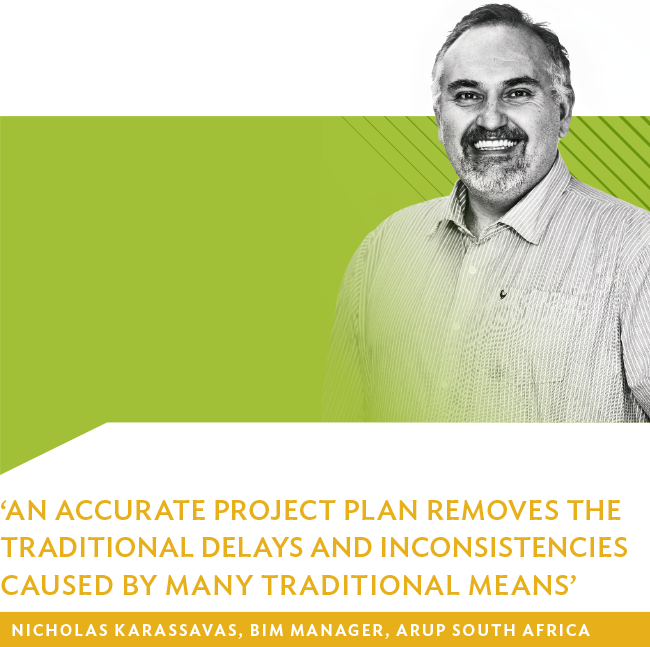 ‘With this approach, it unlocks other avenues, like modernising your application development. It also enables mobility, as your infrastructure is now outside the bounds of your organisation, reducing the constraints on growing your organisation.’

Remember the depth of data that Arup’s BIM system provided? Burger sees that kind of big data capability revolutionising almost every industry. ‘Each organisation has their own unique day-to-day requirements, but looking at big data, each individual now has access to what they need in order to improve their way of working. Having access to live traffic, for instance, can not only provide you with insights to optimise your fleet routes, but also manage your retail business by understanding consumer movements.

‘Having access to residential income groups, by area, and combining this information with your online shopping trends will provide valuable insights to where you need to place your next billboard, and what product to associate your brand with. All of this is now available on your mobile device, enabling you to make decisions instantly in a secure and trusted way,’ he says.

‘Access to real-time information is critical, but further to this is to have one view of that data,’ says Yvonne Dias, ISV director at Mint. ‘In the past, businesses would have a number of business systems that would not talk to each other and there was some form of reconciliation to get a view of the current standing. Cloud and big data allow all of those systems to talk to each other, processing massive amounts of data in a short period of time and having one holistic view easily available. It allows for quick access to data for quick and accurate decision making.’

That said, in the excitement about disruptives – big data, cloud computing, mobile technology, virtual reality, 3D modelling and so on – there looms the gloomy spectre of cybercrime, which Bhagattjee sees as being more than just a legal issue. ‘It’s also about international best practice, so that businesses – especially in the financial services sector – are not reactive,’ she says. ‘The police aren’t always trained or equipped with the technical expertise to deal with cybercrime, so one of our big clients has a team focusing on gathering evidence to help the police ensure a better enforcement rate.’

International transactions pose another challenge. ‘Many of our clients have a pan-African reach, so these things cross borders as well, hence the focus on international best practice,’ says Bhagattjee. ‘For the moment, it’s a huge compliance nightmare, with many companies operating in different countries, with differing compliance requirements.’

In the meantime, Bhagattjee says that she (along with the rest of the ICT sector) is also trying to wrap her head around the emerging blockchain technology, which governs bitcoin and other online currencies. That’s what is making the ICT sector so fascinating – or, as both Bhagattjee and Karassavas put it – ‘exciting’. Just as the dust begins to settle after one disruptive innovation, another one comes along to change the game all over again.