The JSE is set to achieve a major milestone with the successful implementation of its T+3 settlement cycle for the equity market, a move that not only aligns the exchange with global best practice settlement standards but ensures that a range of additional benefits flow to the market. These include improved liquidity as cash is released earlier in the settlement cycle and funds in circulation also increase.

‘T+3 significantly decreases the number of unsettled trades so that if the market defaults, the number of trades the JSE will have to unwind is far fewer. Also, based on the average R25 billion in value traded daily, it means R50 billion would be freed into the system.’

The move to a shorter cycle impacts on all market participants, including the JSE, listed companies, traders, investors, clearing and back-office staff, Strate and all regulators. Strate is the central securities depository that provides electronic settlement of equities concluded on the JSE.

Although the JSE’s failed-trade rate has been close to zero over the past 15 years, the shorter settlement cycle will increase the number of trades that roll and don’t settle on time. The exchange aims to limit these to less than 5% of total trade and is actively working with all participants to encourage behaviour changes where required, according to Van Wamelen. 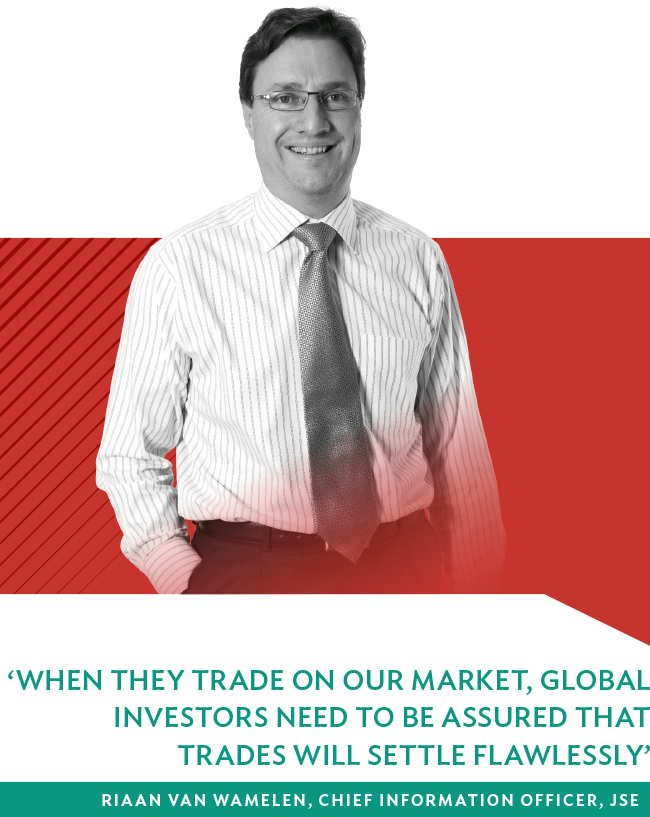 He says electronic platforms have become a necessity to improve transparency, liquidity and efficiency in government and corporate bond markets worldwide.

The project was completed in three stages over three years, says van Wamelen. ‘The first phase entailed a series of automation and regulatory changes and was successfully taken live in 2013. Phase 2 required the implementation of a new equity clearing system and substantial changes to existing JSE systems, including the broker/dealer accounting system. With this having run smoothly, we were able to move to the last and final phase of the project this month.

‘The JSE has a powerful post-trade base spanning all markets and our objective is to enhance our current world-class services to become a leader in post-trade and clearing services among exchanges globally.’

The exchange has continually upgraded and improved its ICT systems to the benefit of its customers.

About four years ago, it successfully launched its new equity trading platform that included a move of the trading platform from London to Johannesburg. This brought about an improvement in stability and, along with the JSE setting up high frequency trading facilities shortly thereafter, trading volumes increased dramatically. Customers agreed that the technology projects afforded them an ‘unbeatable’ trading experience in terms of speed and efficiency.

Van Wamelen says the most recent moves to T+3 will allow SA and the JSE to assertively compete on international equity markets. ‘When they trade on our market, global investors need to be assured that trades will settle flawlessly.’

Non-residents hold just under 40% of trades, with approximately 30% trading every day.