By the book - JSE MAGAZINE

It’s better than it was – though there’s still room for improvement. That was the general verdict from mining companies, investors and legal experts after Mineral Resources Minister Gwede Mantashe released a new draft Mining Charter in September 2018. The Mining Charter is a commitment by mining companies to meet agreed targets to uplift the condition of workers and communities in a bid to address historical injustices. Fulfilment of these targets is a condition for mining companies to secure rights to mine under the Mineral and Petroleum Resources Development Act (MPRDA). The first charter was signed in 2004 and it is reviewed and renewed every five years.

The Minerals Council South Africa, which represents most of the industry, says it broadly supports the intentions and content of the new draft, with a few reservations. ‘It is perhaps a sign that he [the minister] has struck a reasonable balance, where all stakeholders are not totally happy,’ according to Minerals Council president Mxolisi Mgojo. Warren Beech, partner and head of mining at attorneys Hogan Lovells, says the publication of the September draft charter as well as the withdrawal of the contentious MPRDA Amendment Bill has gone some way in providing certainty and stability. ‘While there have been significant improvements from the position in previous versions of the Mining Charter, the voices of dissent have already started, from communities that are dissatisfied, through to other stakeholders that have expressed concerns regarding the achievability of some of the provisions of Mining Charter 2018,’ he says. ‘This is of course to be expected. It would simply not have been possible to create a document that was 100% acceptable to the myriad stakeholders in the mining and natural resources sector.’

Every five-year review of the charter has been fraught with conflict between government, labour, communities and mining companies, largely over the definition of issues such as ownership and the setting of new and higher targets. Yet the most contentious version of all was the one gazetted by Mantashe’s predecessor, Mosebenzi Zwane, in 2017. It contained onerous new conditions, including an increase in required black ownership levels from 26% to 30%. It mostly ignored any input from the mining industry, leading to a court challenge by the Minerals Council.

Some of the industry’s objections were that Zwane’s charter required mining companies to pay dividends to black shareholders ahead of all other shareholders and established a new, vaguely defined community development agency, which mining companies would fund through 1% of annual turnover. One of the first moves by Mantashe, was to publish a new draft in June, but that version was also not well received.

Anthea Jeffrey, head of policy research at the South African Institute of Race Relations, wrote in August that Mantashe’s first draft charter overlooked the dire economic plight of many mining companies. ‘Instead, it demands that all rights holders do additional and costly BEE deals while simultaneously fulfilling a host of unrealistic procurement and other obligations. These requirements will greatly push up operating costs – and increase the likelihood of shafts being shuttered and mineworkers retrenched.’ 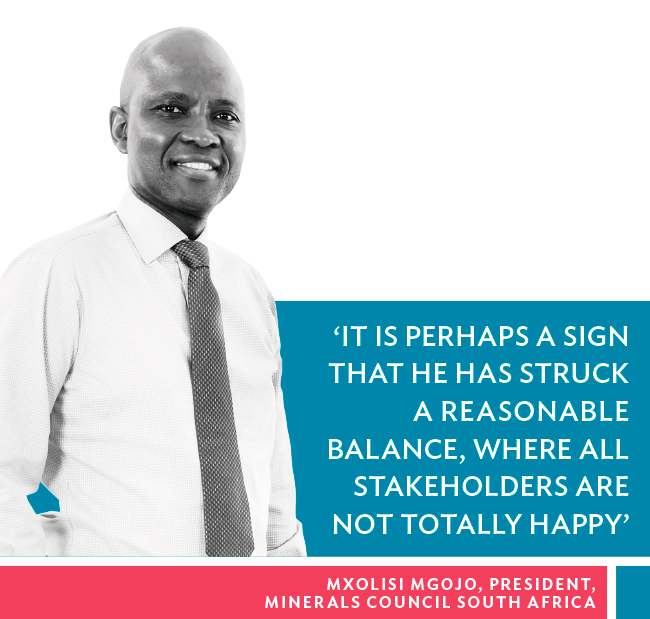 Mantashe’s second version, published in September, made several amendments. A welcome move is that mining companies that meet 26% black ownership requirements for their current mining right do not need to increase it to 30%, and companies that were 26% black owned but whose black shareholders have sold some or all of their holding do not need to top up to 26% again. This recognises a court ruling in April last year that the Department of Mineral Resources (DMR) could not enforce a new, higher level of BEE ownership on a mining company unless it was a condition of the mining right. However, the current draft requires applicants for new mining rights and renewals to have 30% black ownership.

Although the new ownership provisions undermine security of tenure, they represent a compromise that has ‘apparently ended three years of uncertainty and hostility’, according to Herbert Smith Freehills partner Peter Leon. The latest version of the charter removes the requirement for prospecting companies to have 51% black ownership, which was difficult to achieve because prospecting companies consume cash and pay no dividends.

The Minerals Council has welcomed those clauses, together with the introduction of mechanisms for mining companies to recover the costs of making stakes available to organised labour and communities. But it is concerned about the limited credit given for past BEE transactions, the treatment of renewals of mining rights as new rights and unrealistic local procurement targets for mining goods. Jeffrey says some clauses in charter III are ‘clearly better’, while others are ‘clearly worse’.
‘There is little in charter III to alleviate investor concerns,’ she says. ‘Investing in mining in SA still remains subject to onerous and ever-shifting conditions not found in other mining jurisdictions and far more demanding and costly to fulfil than increased royalties and taxes.’

Legal firm ENSAfrica says there are issues in the latest draft that are still likely to be challenged in court. It cites the fact that a company applying to renew its mining right will have to show black empowerment shareholding of 30% was not contemplated in the MPRDA’s renewal requirements. In addition, it says, the requirement that the DMR has to approve an agreement between a mining company and a BEE shareholder, specifying how the BEE shareholder could exit the investment, gives the DMR extra powers not contemplated in the act.

Leon says it is a pity that the DMR had to publish guidelines on how the charter is to be met. ‘Ideally the requirements imposed under the charter should be clear to understand as well as to meet,’ he adds. Various commentators emphasise that Section 100 of the MPRDA does not provide for the creation of any new charters other than the 2004 one, which means that any of the new charters could be challenged in court.
‘The initial 2004 charter is, of course, the document that was lawfully developed under Section 100,’ says Jeffrey. ‘On the clear wording of this section, Mr Mantashe has no power to amend this initial charter, let alone repeal and replace it. The whole of charter III thus remains ultra vires the MPRDA and invalid.’ 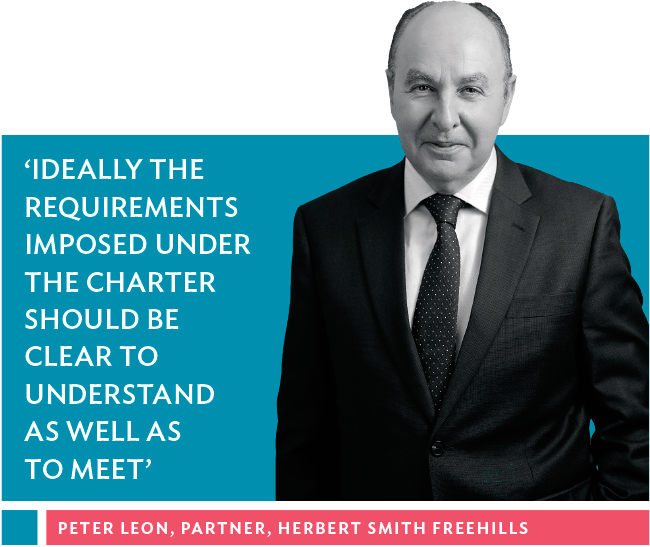 According to Christiaan Bothma, a member of Sanlam Personal Wealth (SPW)’s investment team, the increased policy certainty provided by the new draft is positive for the industry, particularly compared to the huge uncertainty of a year or so ago. Yet SPW is concerned about some of the requirements new mining-right holders must meet and the fact that a renewed mining right would be treated in the same way as a new right. ‘SA still has relatively plentiful mineral resources: precious metals – platinum group metals, diamonds and gold, ferrous metals – iron ore, manganese and chrome, and coal,’ says Bothma. ‘However, our resources have to compete with other global options for the business of large mining companies. The onerous transformation targets in the Mining Charter make the required returns on these investments higher, which means other jurisdictions may in many cases prove more attractive.’

Mantashe’s latest charter is not yet final. There will still be further discussion with industry, labour and communities about various aspects of it.
‘The Minerals Council will engage Minister Mantashe on these unresolved issues,’ says council CEO Roger Baxter. ‘It is also hoped that greater clarity and certainty will be obtained in the coming weeks, as the guidelines for implementation are developed.’ Beech notes that if, after a process of negotiation, there is still dissatisfaction with the charter, various mechanisms remain available, including appealing to the courts.

Mining is an industry with particularly long investment horizons. To develop a substantial deep-level, labour-intensive gold or platinum mine requires billions of rands, and it can be almost a decade before the mine starts to make a profit. Pledging huge sums for long periods requires not only a long-term view on cyclical minerals prices but for investors to feel confident there will be no adverse policy rulings that will affect their future returns.

Repeated revisions to the 2004 charter and other moves to change legislation, such as the now-defunct MPRDA Amendment Bill, have shaken investor confidence. But there has also been extended negotiation and a willingness on both sides to make concessions. In a statement after the Minerals Council met Mantashe in October, Baxter says the minister has ‘a sincere commitment to working with the industry to ensure that our industry regains its rightful position as a key flywheel to the engine of the economy’.

The changes Mantashe has introduced compared to previous versions of the charter have gone some way towards addressing industry concerns. The mining industry has also shown, by successfully challenging important issues in court, that unjust ministerial actions will be struck down.

‘After several years of extremely damaging regulatory uncertainty, SA’s mining industry appears to be turning a corner,’ says Leon. ‘With deep capital markets, sophisticated financial systems, as well as world-class engineering schools and firms, SA still has the necessary attributes to reclaim its place as the continent’s leading mining destination.’