The second half of 2018 saw SA mining stocks improve on the basis of much greater certainty in the regulatory environment. Despite the good news, the sector’s performance has been patchy, weighed down by high administered prices and serious declines in two of its four most important mineral commodities – gold and platinum.

PwC partner Andries Rossouw points out that in 2018, the JSE Mining Index recovered somewhat, ‘although even with the uptick, the index is still where it was 12 years ago’. For ‘about the last year’, the local index has returned to the level of international indices such as the HSBC Global Mining Index, suggesting that mining share prices in Johannesburg have shaken off the local contagion that has bedevilled them in recent years.
Indeed, says Rossouw, the Mining Index has beaten the JSE All Share Index for the past two years – the first time this has happened in a decade. But this is in the context of the All Share falling approximately 25% over the course of the year.

The positive news has been driven by increases in production of bulk industrial commodities such as coal and iron ore, as well as manganese. Manganese has been the success story of the past decade, with production more than doubling from 6 million tons in 2007 to 14.14 million tons in 2017. But this has not offset declines in precious metals. Gold production has more or less halved in the same period (252.6 tons to 136.8 tons) and platinum has also declined, although less spectacularly (from 304 tons to 260 tons). ‘South Africa bulk’s commodity boom has been driven by China,’ says Rossouw. The Chinese government has made a deliberate choice to embrace environmentally friendly growth – a decision embodied in its 13th Five-Year Plan, introduced in 2016. Rossouw points out that this has resulted in the closure of many low-grade iron ore mines and a turn to imports of high-grade material. This has been good news for SA’s main iron ore miner, Kumba, which operates on a notably high-grade orebody (62% content). 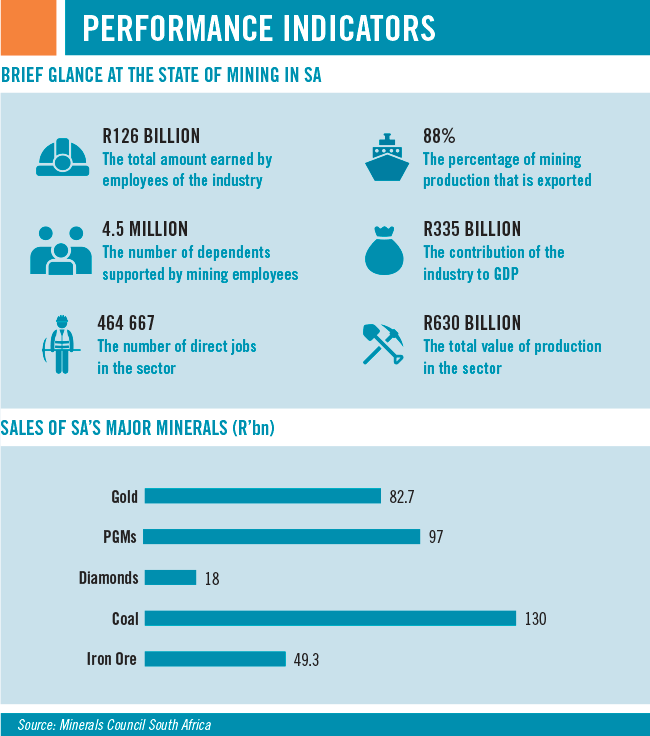 Lance van der Walt, director of African Mining and Crushing, observes that SA’s manganese is of a very good grade (34% content) compared with other countries, and the same can be said of the country’s chrome resources. Chrome, SA’s seventh-largest mineral product by value, saw production increase from 9.66 million tons in 2007 to 16.59 million tons in 2017. ‘The problem is that if you go to international expos and travel the world, talking to industry practitioners, you will find that South Africa is viewed in a dim light,’ says Van der Walt. The issue is not as simple as sorting out the Mining Charter. ‘There’s hardly been any exploration for 20 or 30 years, which means the main focus of many locally based companies has been in Africa – outside South Africa,’ he says. The ecology of the firms that make up the contract mining and services sector is one of the SA mining economy’s great strengths. Van der Walt points out that in many technology-intensive areas, SA continues to dominate the continent, offering world-class services. But it is troubling that so much of this expertise is exported rather than used locally.

However, Jaco Lotheringen, MD of Centurion-based mining engineering advisers Ukwazi, argues that the strength of the country’s mining services sector offers ‘a potential growth path’ in Africa, adding that SA firms ‘are less risk averse and will go to jurisdictions and countries that companies from other countries may find too risky’. He maintains that SA companies still have internationally competitive industry knowledge and skills, ‘as well as relevant software and modelling capacity and deep operational expertise’. Being in a similar time zone to the rest of Africa also offers an advantage over many competitors – in management, communication and reactive time frames.

SA mining services firms, says Lotheringen, ‘have a deep understanding of conditions, risks and constraints relevant to Africa throughout the various regions’.
Minerals Council South Africa (MCSA) CEO Roger Baxter argued recently that ‘what’s a real shame is that most of the growth in our upstream supplier contractor industries has actually been growth outside of South Africa, because the mining industry in South Africa has been shrinking over the course of the past decade’.Observers agree that SA has presented contradictory stories over the past 20 years. Rossouw points out that, in contrast with industrial minerals,‘South Africa’s rising cost base is killing the precious metals producers – gold and platinum group metals [PGMs]’. PGM miners do, however, enjoy some relief from the low global price of their main product as a result of a surge in the prices of other minerals in the PGM basket (palladium and rhodium) and nickel.

Platinum is currently oversupplied in the global market and, as a result, prices are down to 2003 levels. But, says Rossouw, a 90% improvement in the rhodium price and a 33% surge in palladium have buoyed the value of the overall basket. These other minerals now make up 40% of its value, a situation last experienced in 2001. This, according to Rossouw, is not sustainable. 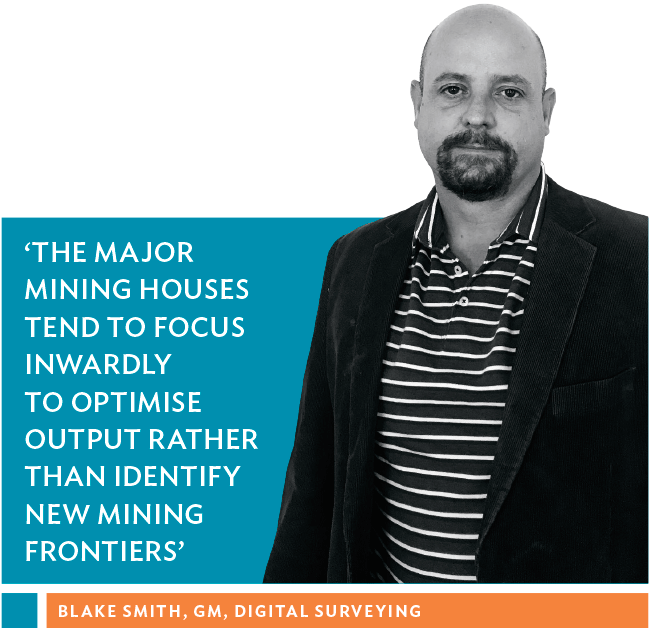 He points out that palladium and platinum are more or less interchangeable in the petrol vehicle autocatalyst market. With the rise in palladium prices, the market is likely to see something that happened during palladium’s ‘big run’ soon after the millennium. ‘We expect to see a substitution of platinum into the market,’ he says.
SA is still the most sophisticated mining jurisdiction in Africa and boasts considerable reserves of technical knowledge and experience. Some observers have suggested that the best outlet for this capacity is exports into the rest of the continent. ‘The Southern African Development Community offers a market for mining goods worth US$4 billion a year,’ says former Mintek president and consultant Paul Jourdan. Of the mining projects in this market, 42% were outside of SA, says Jourdan. Yet, he argues that ‘the SADC mining capital goods market is dominated by imports, particularly from the EU’. He views this not as a problem but as an opportunity.

Jourdan is now CEO of the Mining Equipment Manufacturers of South Africa (MEMSA), an organisation established to support the growth and development of the country’s upstream mining manufacturers. ‘The SADC market represents an enormous opportunity for MEMSA’s members to leverage in terms of import displacement,’ he says. Jourdan believes this is an essential part of the process of transitioning SA from a labour-intensive mining tradition to a capital-intensive one. He also disputes that greater capital intensity means a decline in the number of jobs offered by mining in SA. ‘Mechanisation based on locally manufactured equipment has the potential to maintain employment levels,’ he says. There has been a raging debate over the implications of using technology in mining, especially when it comes to jobs. Trade unions fear further net job losses in the sector but some experts predict a much more neutral impact.

A paper by Garth Williams, Shawn Cunningham and Deon de Beer argues that advanced manufacturing techniques will not lead to job losses, provided there is an adequate level of innovation in product design. That’s good news for the manufacturers of mining equipment using SA knowledge. But the paper’s findings may have more negative implications for the activity of mining itself. The authors note that ‘process innovation’ – which happens when advanced technologies are applied in mining – has a negative correlation with employment.

Blake Smith, general manager of digital and geophysical services and related rental products provider Digital Surveying, argues that ‘any supplier in this game who is not diversifying into our neighbouring markets in Africa to take advantage of their developing needs for commodity exploitation is seriously going to miss the boat’. According to Smith, the competition will eventually be thinned out, as the prospects for growth and sustainability are limited in SA at the moment. However, the industry is cyclical by nature. ‘At the moment the major mining houses tend to focus inwardly to optimise output rather than identify new mining frontiers,’ he says. ‘This is a continuously repeatable cycle in the mining industry, flip-flopping one side to the other.’

Smith says that SA companies still have significant advantages, rooted in long experience and the country’s diversity of resources. He points out the cost bases of SA companies are ‘significantly lower than American, European and Australian companies, which give us a significant edge in the market’.

The advantages enjoyed by local companies are significant and, linked to prospects in the rest of the continent, likely to be enduring. In fact, they are strong enough to focus on whatever commodities offer opportunity in SA, as well as prospects elsewhere on the continent.