The Liquid Telecom group, a leading communications solutions provider with operations across Africa, is accelerating this digital transition across its existing customer base and the growing number of public- and private-sector organisations keen to drive efficiencies, improve productivity and increase competitiveness.

PUSHING THE CONTINENT FORWARD
Liquid Telecom believes every individual on the continent has the right to high-speed internet connectivity, and with that single-minded focus,the company has built the continent’s largest independent fibre network, which is approaching 70 000 km, linking more than 660 towns and cities in 13 countries. This is the vision that has driven its network expansion across Africa over the past 10 years. 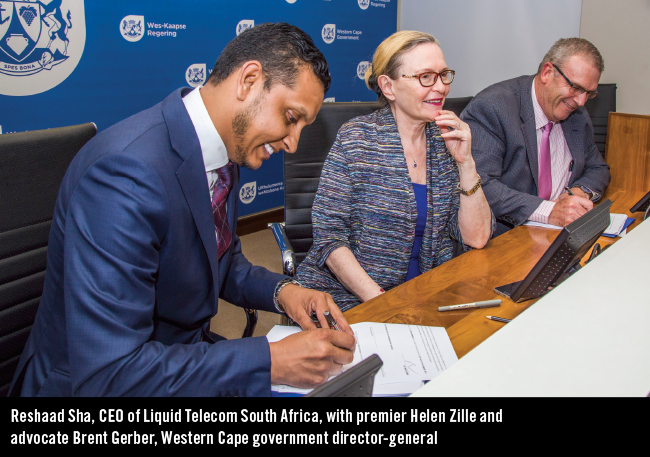 High-speed broadband has many proven economic and social benefits, improving access to education and job creation, among them.

In December 2018, Liquid Telecom reached an agreement with CDC Group, the UK’s development finance institution, for a $180 million investment, which will enable Liquid Telecom to expand its high-speed broadband connectivity to some of the most underserved communities across Africa. Once completed, the improved connectivity is expected to have significant positive impacts – from providing access to online educational resources to supporting national economies, expanding the job market and driving the adoption of new technologies.

In March 2019, Liquid Telecom announced the general accessibility of Microsoft Azure across its pan-African network, further increasing connectivity to its cloud services. As a result of the new Azure cloud regions, SMEs, enterprises, public-sector organisations and multinationals with a presence in Africa will be able to access global services with local data residency, and the benefits of low latency and high local capacity built upon Microsoft’s trusted cloud principles of security, privacy, compliance, transparency and reliability.

INNOVATION PARTNERSHIPS
The Liquid Telecom Innovation Partnerships initiative was launched in 2017 and is aimed at supporting the development of digital technology across Africa.

READY FOR THE REVOLUTION
Access to high-speed broadband is building the foundations for digital growth and innovation across the region.

Start-ups and businesses in Africa are experimenting with emerging technologies, such as AI, IoT, big data analytics and blockchain, that have the potential to solve African problems and improve lives. 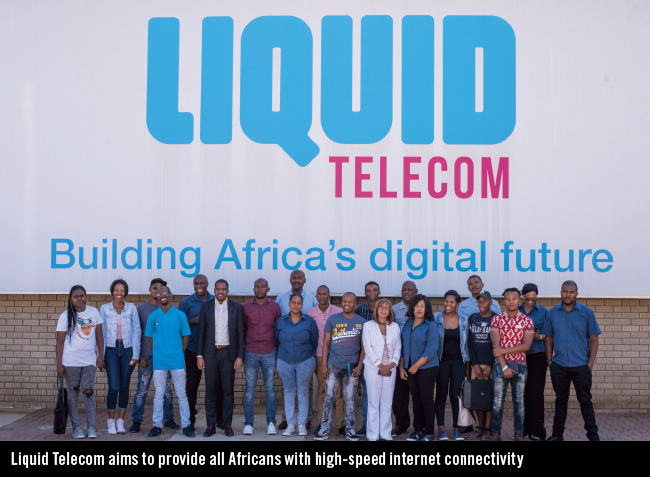 Liquid Telecom is improving cloud capabilities across the region – providing both the infrastructure and tools to accelerate digital innovation.

An estimated 20% of the African population is aged between 15 and 24, marking the region as the youngest in the world. The company recognises that the development of digital skills will be critical to their future as well as a successful digital economy.

The company is finding new ways to support Africa’s thriving tech start-up ecosystem. It already provides access to high-speed internet and cloud-based services to many of the region’s innovation hubs, start-up competitions and academic institutions.

THE STORY DOESN’T END HERE…
The ‘One Africa’ network will be moving further into Central and West Africa. Liquid Telecom is in the process of establishing multiple fibre crossings between East and West Africa.

INDUSTRY OUTLOOK
The telecoms industry is experiencing unprecedented expansion: mobile data volumes are growing at 47% CAGR; African FTTH connections are increasing at 33% CAGR; business demand for connectivity is expanding at 20% CAGR; while cloud traffic volumes are moving upwards at 41% CAGR. In addition, global spending on IoT is forecast to top $3 trillion by 2020.

Fibre roll-out will be fuelled by the increasing mobile data volumes at well as the growing demand by business for high-speed, highly reliable data connections. The shift to cloud-led digital solutions will transform the traditional data centre business while underpinning the continued growth in cloud traffic.

Liquid Telecom is well-positioned to capitalise on these opportunities with a diversified high-quality solutions portfolio delivered across its network.