Bitcoin may well be the worst thing that has ever happened to technology. Not because it is disrupting traditional financial systems, nor because it is one of the great bubbles of our time, and nor because it is generating obscene wealth for seemingly undeserving charlatans.

Rather, the triumphs and tragedies of the cryptocurrency could drive nails into the coffin of the credibility of the powerful technology that underpins bitcoin. The digital currency is, at its core, an application of a distributed ledger that records all transactions in a chain. So powerful is this concept for verifying transactions, it has spread far beyond the feverish speculation that surrounds bitcoin and other cryptocurrencies.

Most major banks and numerous other institutions are experimenting with it, primarily as a means of verifying and authenticating contracts. This makes it useful for share markets, to the extent that Strate, which maintains the database of who owns what shares on the JSE, is a key member of the SA blockchain working group. The fact that the group includes the major banks as well as the South African Reserve Bank offers a sense of how seriously blockchain is taken.

Recently, its appeal has spread far beyond the financial sector. Potential applications revolve around the fact that it offers security and transparency, while not being dependent on centralised control. From supply chains to self-driving cars to voting in elections, the ramifications run deep. 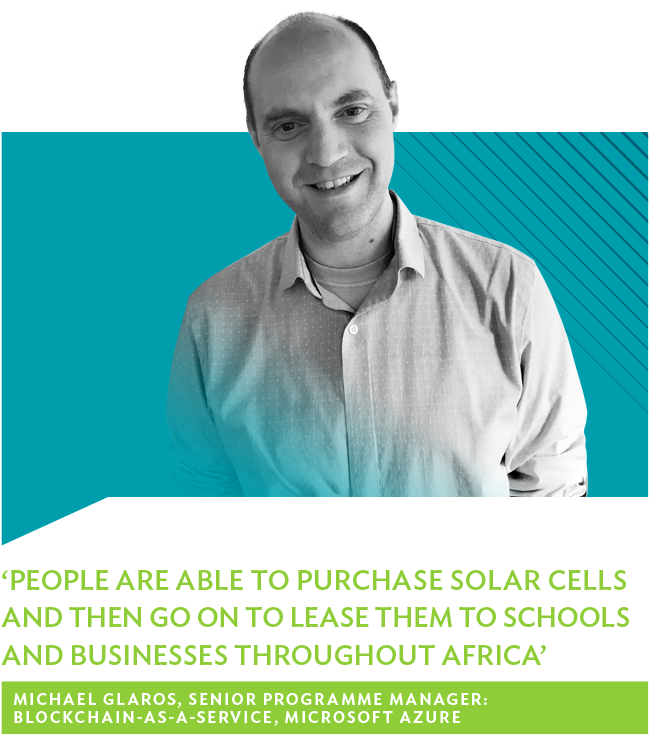 It can get very specific too. IBM recently announced a collaboration with major food suppliers and retailers, including Nestlé, Unilever and Walmart, to improve food safety through exchanging data across a blockchain network. Visibility, trace-ability and accountability is enhanced throughout the food supply chain, so that, for example, Walmart was able to reduce the time taken to trace a mango shipment from weeks to a mere two seconds.

‘Transparency on how food is handled from the farm to consumers has been challenging, owing to complex and fragmented data-sharing systems,’ says IBM Industry Platforms senior vice-president Bridget van Kralingen. ‘Blockchain holds promise in delivering the transparency that is needed to help promote food safety across the whole supply chain.’

As a result, blockchain is likely to have a major impact on the reliability of imports from China, where distribution of pork, in particular, is fraught with sanitation issues. Internet of things (IoT) sensors are being installed throughout the supply chain, and information relating to farming, storage, transport and processing is fed into the blockchain network. Again, this cut down the time spent on tracing and quality controls from weeks to minutes.

Since information imported into the blockchain cannot be altered without the agreement of all participants in the chain of information blocks, it is highly improbable that automated data will be changed or faked once it is produced.

Even the consumer can use the information. According to Korea IT News, a food distributor in South Korea called Samjin Food has introduced blockchain technology aimed at shoppers. When consumers use smartphones to scan a QR code printed on a Samjin Food wrapper, it takes just one second to find out details such as place of origin, manufacturer, manufacturing data, expiration date and the store.

Developed by Samsung SDS, a consulting division of the electronics giant, it is expected to improve credibility of products in general, as it is impossible to counterfeit or modify the blockchain. 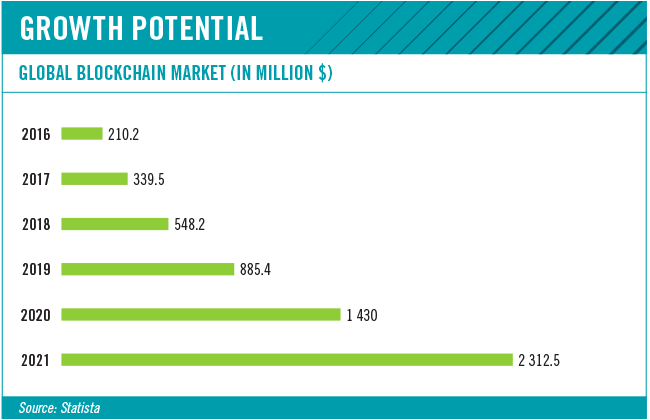 Samsung SDS recently won an order from the Seoul city government to use blockchain to collect private information from citizens and apply it to administrative facilities such as municipal transport, social security and public safety. The purpose is to increase transparency as well as citizen convenience.

It has also completed a government-backed seven-month blockchain pilot project to track shipping logistics and documents. Now all import/export paperwork related to shippers, customs and banks is stored on data blocks in an immutable ledger. This will not only simplify the overall document issuing process but also dramatically speed it up.

Since this system could also integrate IoT data from sensors that monitor fresh food – including position, temperature and humidity – it enhances both food security and the ability of insurance companies to make more accurate estimates of insurance cover.

In Europe and Australia, extensive research and piloting is going into the reinvention of deeds registries. The Swedish land registry authority, the Lantmäteriet, believes recording property transactions on a blockchain will eliminate paperwork, reduce fraud and speed up transactions. As a result, it could save taxpayers more than €100 million a year.

Last year, the Lantmäteriet demonstrated that it could create smart contracts that automate transactions on a blockchain, so that a bill of sale can be concluded with the buyer and agent’s digital signatures and verified automatically, wherever they are. The authority as well as banks, agents and parties to the transaction receive not only copies of the contracts, but also access to the verified steps in the process.

The concepts of forged or lost title deeds, or even errors in documents, disappear into the dustbin of outmoded practices.

One of the main advantages that such blockchain implementations have over cryptocurrencies is that they do not require thousands or even millions of transactions to be validated every minute, as is sometimes the case with bitcoin and its equivalents. Being private or internal organisational blockchains, they have a defined user base with specific requirements.

It is now obvious that blockchain solutions do not have to revolve around financial transactions.

‘Bitcoin only scratches the surface,’ says Michael Glaros, senior programme manager with Microsoft Azure’s blockchain-as-a-service engineering team. ‘For instance, Cape Town-based company the Sun Exchange plans on employing blockchain to create smart contracts that will allow anyone, anywhere to own as well as earn money from solar panels. People are able to purchase solar cells and then go on to lease them to schools and businesses throughout Africa.

‘Another example is Avenews-GT, an ecosystem for the international and local trade of agricultural produce. The company aims to empower farmers by enabling them to participate in the global market. The business provides a digital trading platform based on blockchain technology and, consequently, enables verified agribusinesses, farmers and commercial agribuyers to transact directly with each other locally and globally.’

Blockchain technology can also be applied to environmental crises. At a recent Cape Town ‘hackathon’ called Unlock the Block (hosted by Linum Labs and the African Institute of Financial Markets and Risk Management), a water-saving solution won a special prize. SudoTesla is designed to transfer water tokens via the Ethereum blockchain network to a smart meter. The tokens are allocated by a designated utility, and users are compensated for water saved.

Clearly, blockchain is a technology waiting to break through. However, negative hype around bitcoin has slowed down uptake. The impact of bad bitcoin press on blockchain was highlighted in a recent research project by World Wide Worx. Between November 2017 and March 2018, the SME Survey 2018 interviewed 1 400 decision-makers at SMEs about their uptake of new technologies.

As many as 83% of those surveyed said they expect to be using IoT in their business within five years. However, this was very much an outlier in terms of future technology uptake by SMEs – blockchain came in at only 9%.

Since half the survey was conducted before the December holiday break, and the rest after the mid-January return to work, it was possible to compare the expectations for blockchain prior to its price shooting through the roof in December, against the period after it crashed in January. Before bitcoin exploded in December, 13% of SMEs were prepared to consider blockchain. After the January crash, the figure dropped to 5%.

This shows that the fortunes of blockchain are, in the short term, tied to those of bitcoin. In the longer term, the success stories of blockchain will probably overshadow the many rises and falls of the cryptocurrencies that helped push blockchain into the mainstream. ‘The use of technology becomes more widespread thanks to the innovation and creativity of its designers and users,’ says Tony Parry, CEO of the Institute of Information Technology Professionals South Africa.

‘In the ICT arena, many new ideas arrive amid some “hype” around their potential benefits for a wider audience, creating a desire not to be left out,’ says Parry. ‘Blockchain and IoT are complex innovations that can add value to commercial and industrial processes, however their application requires complex skills.’