Until recently, the JSE provided a point of presence (PoP) in London. This was a physical line linking the UK to SA, that allowed clients to connect to the JSE via a centralised hub instead of each of them trying to physically connect to the JSE individually. ‘The PoP was for clients who didn’t want to incur the costs of a direct connection all the way to Johannesburg, and who couldn’t have a presence in the JSE’s colocation centre,’ says Neil Vendeiro, Product Owner: Market Data at the JSE. ‘It allowed them to still have direct access to JSE services, but in a more cost-effective way.’

That PoP was located at the LD4 Data Centre in the greater London area. ‘Because LD4 is an international data centre, clients who had a presence there could do a cross-connect,’ he says. ‘That’s a short physical connection from where they were in that data centre to our PoP inside the same data centre. It was very convenient for these clients – all of whom are international players.’

The PoP was a competitive solution, but it had its limitations. To provide clients with more flexibility, ease and choice, and to allow for a wider geographical footprint of JSE services, the JSE has evolved its solution into what’s known as a ‘virtual PoP’, called the International Access Point (IAP). This meant terminating the PoP presence at LD4 and introducing the IAP at a new location at Telehouse in central London.

The JSE did not intentionally provide an end-to-end solution. With the help of a technology service provider, it merely established and maintains the connections from the JSE Data Centre to the new IAP. 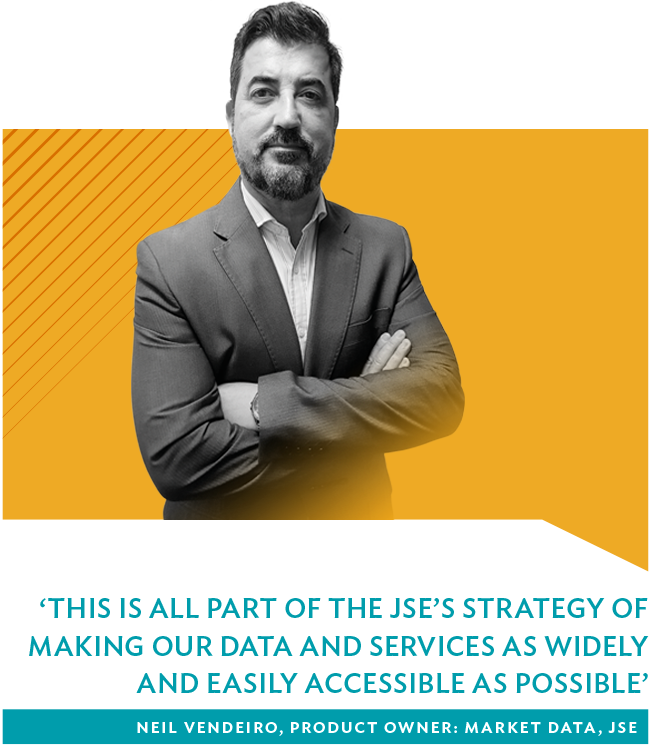 ‘Rather than having one party doing the connections to the IAP – as we did with our previous solution – we decided to allow a group of international telcos to provide that connectivity,’ says Vendeiro. ‘By having more than one connectivity provider in the mix, we’ve widened our footprint, and given our PoP users flexibility and choice, helping them to lower their costs by leveraging off existing relationships with those providers.’

Those four telcos – which are now all JSE-accredited extranet service providers – are Fixnetix, Colt Technologies, BT Radianz and ICE Data Services. Each will now provide the connectivity from the IAP to their networks and to clients – meaning that access to the JSE services can now be achieved from financial centres other than London.

‘These telcos have global networks, with bigger footprints,’ says Vendeiro. ‘If a hedge fund in Chicago, for example, wanted to connect to the previous solution, they would have had to somehow find their way to our PoP in LD4. Now, that hypo-thetical hedge fund in Chicago can hook up to the closest access point for that international telco in the Chicago area, and then create a logical connection to the IAP in Telehouse.’

The new technology enhances the JSE’s solutions and offers client the option of reduced costs when they access the JSE markets. ‘This is all part of the JSE’s strategy of making our data and services as widely and easily accessible as possible.’

It’s a long way from London to Johannesburg, but this new solution shortens that distance – at least from a data access point of view. ‘The JSE is a lot like Australian or South American exchanges, in that we’re distance-challenged,’ says Vendeiro.

‘People might have an interest in our markets, but they’ll be challenged if they can’t get to our systems. You can have the greatest exchange with the very best trading opportunities, but it’s no good if your clients can’t access them easily and cost effectively. This new solution confirms that the JSE is accessible, and that we are very open for business.’