Every year, Mark Zuckerberg makes a New Year’s resolution. In previous years, those resolutions have included learning Mandarin and reading two books a month. On 27 January this year, Zuckerberg shared his goal in a post to his Facebook followers. (That’s a bigger crowd than you’d think – as co-founder of the social media platform, Zuckerberg has more than 66 million ‘friends’.)

‘My personal challenge for 2016 is to build a simple AI [artificial intelligence] to run my home and help me with my work,’ he wrote. ‘You can think of it kind of like Jarvis in Iron Man. I’m going to start by exploring what technology is already out there.’ Zuckerberg would do well to start his search in the smartphone industry.

It’s not an obvious place to look, mind you. For the past few years, the smartphone has been in the innovation equivalent of a holding pattern, with incremental improvements and no real technical breakthroughs to write home about.

Annette Zimmermann, research director at consultancy firm Gartner, admitted as much last year, ahead of the 2015 Mobile World Congress. ‘In such a highly mature smartphone market, it is increasingly difficult for vendors to differentiate their high-end products,’ she said.

A year later, not much has changed. Honestly, is the Samsung Galaxy S7 really all that different from the S6? And could you – hand on heart – tell the Apple iPhone 6 and 6S apart? Smartphones now all do pretty much the same things, and really well. But each new model that comes out shows only incremental or cosmetic improvements on its predecessor. Smartphones are long overdue for their next big technological leap forward. Which brings us back to AI – and Mark Zuckerberg.

Dag Kittlaus and Adam Cheyer, the creators of Siri, Apple’s AI personal assistant, recently published a demo of their new creation, Viv. Unlike Siri, Viv will be able to understand local accents (a task that has – hilariously – often proven beyond Siri’s capabilities). And unlike Siri, Viv will learn. The more you use Viv, the more it will get to know you, and the more personalised its assistance will become. It will seamlessly integrate with third-party services such as Uber and the payment portal Venmo, will connect with smart devices and applications connected to the internet of things, and will be entirely voice controlled. The 2013 science fiction film Her, where Joaquin Phoenix held long, intimate conversations with his AI assistant (and ultimately fell in love with it), could soon become smartphone reality.

It will be a virtual reality, as VR technology comes to the fore, powered by 360-degree video. 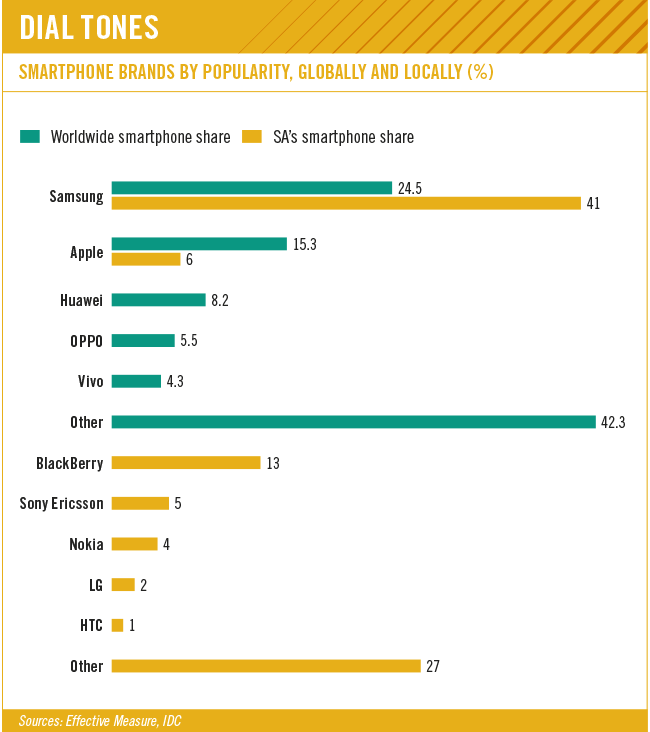 ‘Ten or 15 years ago, most of what we shared and consumed online was text,’ Zuckerberg said in a keynote address at this year’s Mobile World Congress. ‘Then it was photos, especially since we got smartphones with cameras. And now it’s really becoming video. The mobile networks are fast enough that most people can upload video and have it not be a terrible experience. As the networks get better and better that’s going to be more and more of what you share.’

Zuckerberg said that video is going to be ‘a huge thing’ in the coming years. ‘What I think we’re going to get to next, and I think this will happen sooner than we think, is the ability to share whole scenes, not just a little 2D video of something that you care about,’ he said.

Zuckerberg may have heard of the Yezz Sfera, even if you haven’t. This little-known Android-powered smartphone was on display at the 2016 CES (Consumer Electronics Show), where it turned a few heads with its integrated 360-degree camera. The phone has two 5-megapixel fish-eye cameras on either side. They record videos at the same time, and then stitch the two 180-degree videos together to create a full picture, which is then converted into a VR environment.

Joining Yezz Sfera in the ‘obscure but exciting’ category is Moxi Group. In May, this Chinese start-up announced that it would be the first manufacturer in the world to sell bendable smartphones, with an initial shipment of 100 000 units this year. The phones can be rolled up into a bracelet and worn on your wrist, or rolled out and flattened into a normal rectangle. For now, the units will feature only black and white displays.

‘Black and white phones are much easier to make,’ Moxi Group executive vice-president Chongsheng Yu told Bloomberg. ‘The colour model power usage is also much higher than that of the black and white unit. We’ll sell in China and if there’s demand overseas, we’ll look into it.’

Yu explained that the bendable phone is based on e-ink (which is also used in Amazon Kindle devices), using graphene technology where carbon atoms are arranged in a specific pattern to make them more conductive and resilient. Moxi has placed battery, processor and other unbendable components at one end of the phone, enabling the screen to bend unimpeded.

At this year’s CES, LG showed off a demo of a paper-thin 18-inch smartphone display that, similarly, could be rolled up like parchment.

Bendable screens aren’t the ultimate goal, though. The Human Media Lab at Queen’s University in Canada recently announced a flexible smartphone that functions as a holographic display, rendering 3D images visible from different angles – without the need for glasses, headgear or any other added hardware.

‘By employing a depth camera, users can also perform holographic video conferences with one another,’ said lab director Roel Vertegaal. ‘When bending the display, users literally pop out of the screen and can even look around each other, with their faces rendered correctly from any angle to any onlooker.’ 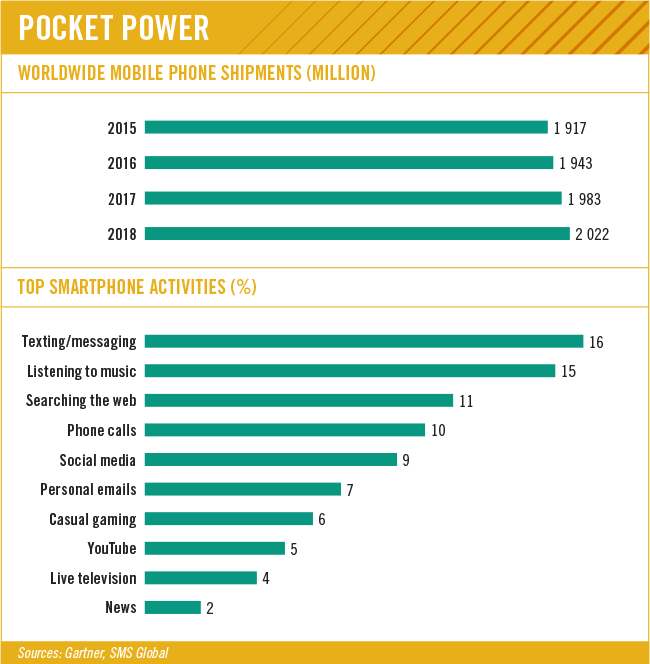 Apple, notoriously, doesn’t allow you to replace the battery in your iPhone. All you can do is keep on charging it – or buy an Android device instead. (And while you can buy a new battery for your Samsung smartphone, your battery-life problems still won’t go away.)

One mooted solution is lithium-oxygen (or ‘lithium-air’) cells, which would offer five times the battery life of our contemporary lithium-ion units. Another left-field solution is photosynthesis. Barcelona-based company Arkyne Technologies has already developed a battery charger that uses a pot plant, sunlight, CO2 and bacteria to send electricity to a USB port. The output of 3.5V and 500 mA depends on the type of plant, and how well you look after that plant. It’s a good – and green – start, but of course, the ultimate goal would be a battery that charges itself.

Apple considered using motion charging in its first Apple Watch, but the gains weren’t great. Instead, the company took out a patent in 2015 that appears to be the basis for using infinite solar power. The patent in question forms the basis of solar cells, built into the smartphone’s touchscreen. It’s still too early for the iPhone 7, but this solar technology – which would do away with charger plugs entirely – may well see the light of day in 2018’s iPhone 8.

You can’t open up an iPhone without special tools and permission from the overlords in Apple’s Cupertino base. But what if that changed? What if you could open up your smartphone as if it were a Lego set, and replace and upgrade the various parts as and when you felt like it?

It’s not an unreasonable question: many PC users have, over the years, opened up their desktop computers and replaced a hard drive here or a graphics card there. Why shouldn’t we be able to do the same with the mobile computers we carry around in our pockets and use to make phone calls?

It’s a question Google is asking with their Project Ara, which would allow cellphone parts to be easily snapped on and off, letting the user customise their phone. This, in theory, would mean you could replace your existing lithium-ion battery with one of those longer-lasting lithium-air units. You could even pop out your existing front-and-back cameras and replace them with a pair of 360-degree-enabled lenses.

It’s the ultimate in personalisation… And it may well be the massive, disruptive shake-up that the smartphone industry needs.