The provision of internet connectivity via satellite has hitherto been perceived as a costly and infrastructure-heavy solution. But satellite service providers say the story is no longer one of expensive or outdated solutions. Rather, they say the next generation of satellite connectivity can offer cheap, effective connectivity for SA, including throughout the nation’s rural areas.

The economic benefit of internet connectivity to a country is well accepted. World Bank research has established that in developing nations, every 10 percentage point increase in broadband penetration results in an economic growth of 1.38 percentage points.

This is a concept that the SA government acknowledges the country is falling foul of and has specifically admitted that its growth is being negatively affected by the inadequate provision of connectivity across the nation. According to the government’s 2013 broadband policy: ‘In South Africa, the lack of always-available, high-speed and high-quality bandwidth required by businesses, public institutions and citizens has impacted negatively on the country’s development and global competitiveness.

‘Despite the take-off in mobile broadband, South Africa’s broadband penetration remains poor compared to that of other lower middle-income countries. South Africa has lost its status as “continental leader” in broadband and internet, and the last two decades have seen South Africa’s steady decline on global ICT indices.’

In a bid to combat this situation, the SA government set out plans back in 2013 to make communications solutions universally accessible across the country by 2030. Specific emphasis was placed on underserved rural areas and satellite was identified as one of the technologies the government considers leveraging in the development of the nation’s ‘digital future’.

It’s been three years since the launch of the policy, and while moves are being made in eight of the 10 designated rural municipalities to start building the connectivity infrastructure visualised in the policy initiative, progress is proving slow – hindered by financial constraints, among other complications. Nonetheless, according to Naila Govan-Vassen, ICT industry analyst at Frost & Sullivan, the earmarking of satellite for connecting rural areas is a tried and tested approach in other global regions, and governments elsewhere have successfully implemented combination infrastructures to make connectivity universally available. As such, the SA government’s approach points in the right direction. 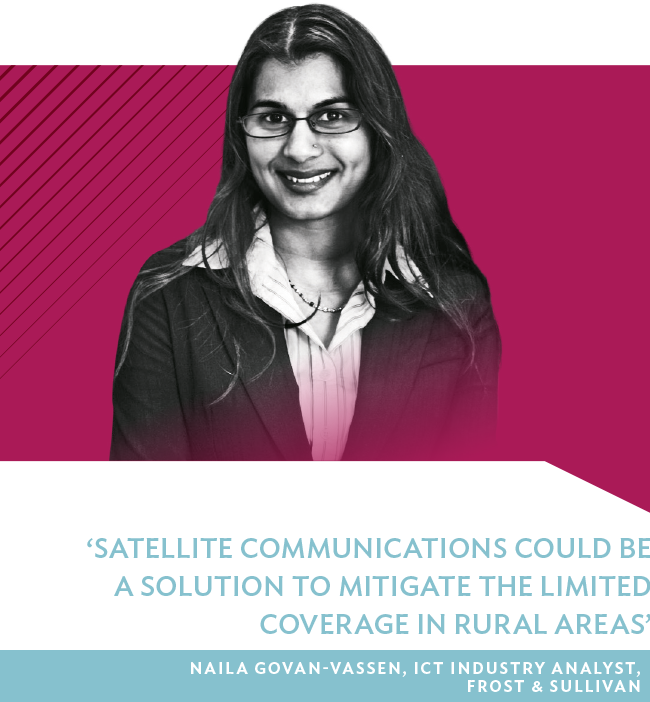 ‘[In SA,] satellite communications could be a solution to mitigate the limited coverage in rural areas, provided that the investment is less than the terrestrial cost.’

In addition to establishing policies and regulatory frameworks that seek to unlock the potential of ICT-based services, Govan-Vassen points to alternative initiatives adopted by governments in other regions to support the provision of satellite services.

In the meantime, there are also a large number of private companies providing satellite connectivity in SA, answering the needs of a broad spectrum of customers – from mobile operators to rural consumers. These players paint a rosy picture of the future of satellite connectivity, pointing to the quickly evolving technologies and ever-decreasing costs.

Liquid Telecom is particularly prevalent across sub-Saharan Africa, providing full satellite coverage of the region. In SA, the company provides broadband access via satellite, as well as enterprise network services such as virtual private networks and virtual routing and forwarding. The company also offers satellite solutions to SA’s local industry active in remote areas across Africa – industry being a key satellite market, particularly mining and manufacturing. For example, local company Bell Equipment benefits from mesh L2 connectivity provided by Liquid Telecom for its operations in the DRC.

Similarly, global satellite service provider Intelsat is also scaling up operations in Africa, having invested more than $2 billion on its fleet covering the continent between 2008 and 2014. The operator currently serves in excess of 200 clients in Africa. Its cellular backhaul customers include the top 10 mobile groups in Africa, representing 81% of the region’s subscribers. The company’s broadband clients include the likes of Vodacom and Airtel, while it also provides commercial-grade C-band connectivity to enterprise customers across the banking, mining, and oil and gas sectors.

Hellas Sat has a fleet (that serves SA and the SADC region primarily) to which it is adding two new co-located satellites, set for launch soon. Both state-of-the-art satellites will provide more than double the power – a 3db stronger footprint – which the company says will bring connectivity costs to a new low, while redundancy will also be at its best.

A multitude of other providers also continue to scale up their operations across Africa, and as the technologies become more and more advanced – with the introduction of next generation and high-throughput satellites – they say the perception that satellite is too costly to prove a viable mass solution for connectivity challenges is outdated. 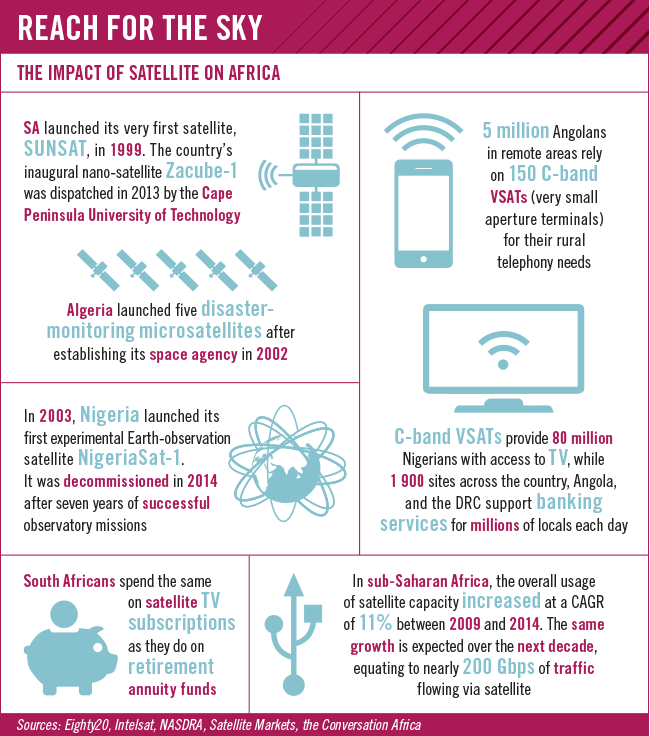 Intelsat argues that new technologies – such as the company’s cutting edge Intelsat EpicNG platform currently being rolled out – are improving bandwidth efficiencies to such a level that the cost-per-bit price to customers will continue to steadily decrease. In addition, the Intelsat EpicNG system leverages spot beam technology, which in turn is bringing down the size of the kits needed to receive satellite signals. Intelsat says this innovation means that service providers in Africa will be able to deliver broadband connectivity to areas previously deemed uneconomical to do so.

Further, the new satellites being launched by Hellas Sat are co-located, meaning any service failure can be rectified within minutes as opposed to the months sometimes required by existing services – again, improving cost efficiency for clients.

As such, Scott Mumford, group head of satellite services at Liquid Telecom, is adamant that satellite is the most effective and cheapest way of providing connectivity in rural areas. ‘Large areas of South Africa are still unserviced by fibre and have only GSM or at best 2G mobile connectivity, which in some instances is actually provided via satellite in any case,’ says Mumford.

‘The addition of hub infrastructure into the local market and connected directly to local internet exchanges such as NAP Africa, SAINX and JINX also improves the overall user experience with the reduction of latency by removing the backhaul from Europe.’

Not only does satellite offer quick and cost-effective connectivity – and as such offer a valuable solution to consumers – from the point of view of a private company, Mumford says the business case for pumping funds into satellite provision is strong.

‘Satellite is the most economically viable way to [connect rural areas],’ says Mumford. ‘Fibre infrastructure takes a long time to build and has a very long ROI [return on investment], and depending on the area it’s going into, sometimes never pays back its initial investment.’