Corporate social investment is similar to deep-level mining in that the true value of a project can generally not be seen from the surface. And CSI, like mining projects, requires long-term commitment in order to achieve a measurable impact. In volatile economic times, it’s often the CSI budget that suffers first during cost-cutting or restructuring processes. But although mining companies are experiencing massive strain – leading to downscaling and job losses – they understand their responsibility towards the communities in their host and labour-sending areas.

‘In the face of considerable external pressure, the need for us to make a positive, sustainable contribution to society is perhaps greater than ever,’ says Andile Sangqu, executive director of Anglo American SA.

He warns in the company’s latest transformation report that the ‘industry’s ability to contribute towards creating a more prosperous and fairer society’ is weakened, but emphasises that despite this, Anglo American has not compromised on meeting its transformation commitments. In 2015, for instance, the group spent more than R1.9 billion on housing initiatives (this amount also covered bulk services, land purchases and housing allowances). Since 2010, Anglo American has built more than 4 400 houses in SA mining communities.

In the report, Anglo American SA head of transformation and regulatory affairs Lindiwe Zikhali explains where the social investment is directed. ‘Our investments in housing are supported by our expenditure on community development projects, which focus primarily on supporting education, infrastructure (such as roads and schools), and community health and welfare. During 2015, our businesses expended R891 million across these sectors (R958 million including the Chairman’s Fund), of which R520 million was spent on social and labour plan [SLP] commitments.’

To put this into context, the country’s total CSI expenditure dropped by 1% in cash terms (a real decline of 6% from the previous year) to an estimated R8.1 billion in 2014/15, as stated in the 18th CSI Handbook. According to the publisher, Trialogue, this is the first contraction in CSI spend since it started recording the spending pattern in 2001.

Trialogue director Cathy Duff maintains, however, that despite declining profitability in mining, the sector’s CSI expenditure does not (yet) reflect any dramatic consequences. 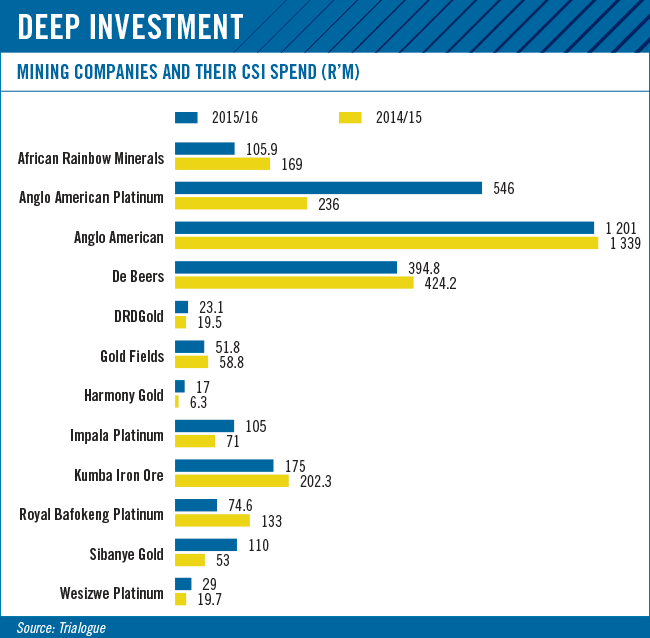 This is likely a result of long lead times in the mining sector and ongoing SLP commitments, which legally require mining companies to detail their contributions to local economic development in the geographic area of their operations during a five-year cycle.

With the lines between CSI and SLPs often blurred, Tracey Henry, CEO of Tshikululu Social Investments, offers a definition. ‘SLPs are a license-to-operate requirement whereas CSI is voluntary,’ she says.

‘Albeit that all companies are expected by stakeholders to adopt responsible business practices and contribute towards the greater good of the country, the reporting requirements differ as SLPs are of a longer-term nature, whereas CSI spend is sometimes more short-term focused.’

As a rough guideline, she explains, CSI generally focuses on education, health, youth development and skills development in local communities, while SLPs tend to go towards infrastructure, housing, people/mine and employee development.

Trialogue meanwhile defines CSI as ‘contributions external to the business for the primary purpose of development’.

Mining companies sometimes solve this complex issue by reporting in more generalised categories such as ‘social’ or ‘community’ investment.

According to John Nkosi, group sustainable development manager at Impala Platinum (Implats): ‘The communities in which we operate continue to benefit significantly from the implementation of our operations’ SLPs, which seek to address identified community needs by focusing on infrastructure, access to clean water, health, education and employment.’ Underlining the interdependence between the sustainability of Implats’ mines and its contribution to the well-being and prosperity of its communities, he adds that ‘given the challenging socio-political environment – characterised by high levels of joblessness, persistent income inequality and increasing evidence of community frustration – it is important that we play an active role in finding solutions to societal challenges’.

Nkosi considers the improvement of employee living conditions and the construction of 3 000 houses to be Implats’ most significant contribution to community development in SA. Over the past eight years, R3.7 billion was directed towards this purpose, including R236 million in 2015. ‘We have committed a further R1 billion, with the goal of having at least 50% of our workforce at the mines residing in formal housing with their family by 2020,’ he says.

The hostel conversion has entered its second phase and will provide 44 new family units, while the first phase of the Platinum Village in Rustenburg saw 503 standalone houses being sold and occupied, as well as 54 walk-up rental apartments completed. Additional houses are on track for completion by the end of 2017.

Implats is also helping mine communities by addressing the widespread problem of loan sharks and employee indebtedness. In 2014/15, more than 370 emolument orders were found to be illegal and nearly R3 million in illegal debts written off. Employees received debt counselling as well as training in financial literacy and retirement planning.

Further south, on the West Rand, Harmony Gold reported the official transfer of seven community projects that have already created 100 jobs near its Doornkop mine. The self-sustaining ventures range from bee-keeping, hydroponic vegetable cultivation and the manufacturing of protective clothing and curtains, to a multi-purpose sports facility and three digital hubs that provide IT support to small businesses, youth and community organisations.

At the transfer ceremony in November 2016, Harmony CEO Peter Steenkamp said: ‘This event marks yet another stage in our strategy to ensure that our host communities are able to continue to thrive even after the mines have closed. These seven Doornkop projects, planned and developed in consultation with the community, benefit young and old, men and women, those with skills and those with developing skills.’ 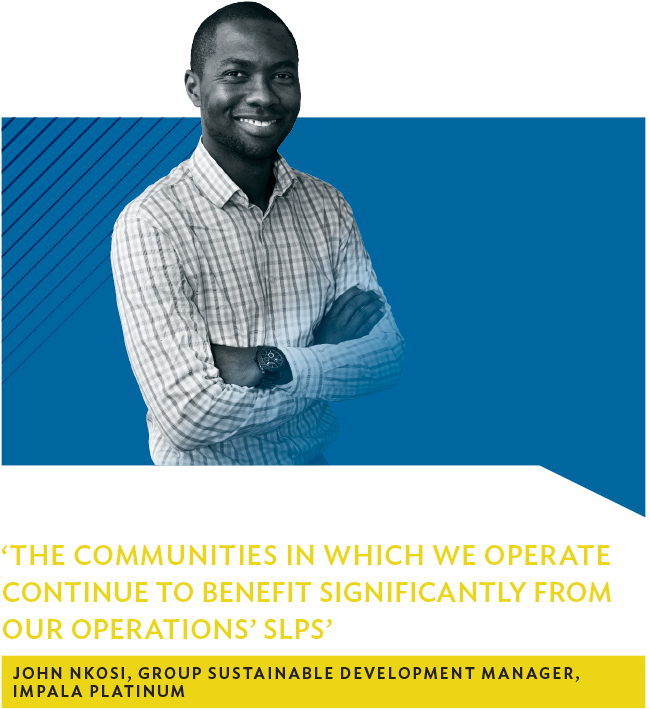 In nearby West Wits, AngloGold Ashanti (AGA) is making progress in training mine community members in organic vegetable farming. Proving the viability of environmentally friendly CSI in mining, AGA is investing R8 million over three years. The gold miner has partnered with the Merafong municipality and non-profit Fruit and Trees for Africa to reduce the community’s dependence on mining. The long-term goal is to enable emerging farmers to run and sustain their own commercial agribusinesses in the mainstream economy.

This type of partnership, involving local municipalities, mining companies, NGOs and mining communities, promises longer-term benefits that could have a wider-reaching impact and possibly even tackle systemic issues. Implats and Amplats have, for instance, separately teamed with the Roads Agency Limpopo to construct stretches of road. In another collaboration, Anglo American is implementing a R120 million, three-year Municipal Capacity Development Programme (with the Investment Climate Facility for Africa and Development Bank of Southern Africa) that will benefit communities in Eastern and Northern Cape, Limpopo, Mpumalanga and North West.

Mining firms are often the main – if not sole – provider of basic services in rural mining communities. Ralph Hamann, research director at UCT’s Graduate School of Business says: ‘There’s a potentially negative dynamic between CSI and the state, which seems prone – sometimes – to abrogate its responsibility for service provision to companies’ CSI programmes. This has negative consequences because companies lack the legitimacy and capacity to act as a replacement for government.

‘CSI programmes often focus on things that normally ought to be bread-and-butter issues for the government. It would be better to leave these tasks to government and rather focus CSI on more innovation-focused ambitions, which the state struggles to pursue.’

Considering the country’s current economic climate, mining communities can only dream of such ambitions. They will count themselves fortunate if mining companies continue to honour their CSI and transformation commitments, as envisaged by Sangqu.