SA is a water-scarce country and making this worse is the current ongoing drought. Water restrictions are difficult for everyone but they are especially trying for industries, such as mining, that use water in their operations. While mining accounts for a relatively low 3% of SA’s water usage, the sector has an important role to play in driving efficiencies in conservation of this resource.

In this regard, many mining companies have water management strategies in place, while others have gone as far as building their own water treatment plants, which process thousands of litres a day, in a bid to not only reduce their water consumption and reuse as much as possible, but also try to lessen their dependence on municipal water supply.

Among the companies to have established their own water treatment facilities at their local operations are Anglo American Thermal Coal (a pioneer among mining companies in establishing such a facility), Harmony Gold and Exxaro.

In partnership with BHP Billiton and the local municipality, Anglo American’s eMalahleni water reclamation plant was commissioned in 2007 at a cost of around R1 billion and is the only mining initiative to be endorsed by the UN Framework Convention on Climate Change Momentum for Change Initiative at COP 17 in 2011.

Designed with sustainability top of mind, the eMalahleni plant considers the remaining 20- to 25-year-life of contributing mines, and will cater for communities long after those mines close. It works by pumping out the water flowing into several of the underground coal mines (including Landau, Greenside and Kleinkopje collieries), which it then treats to potable quality by reverse osmosis. 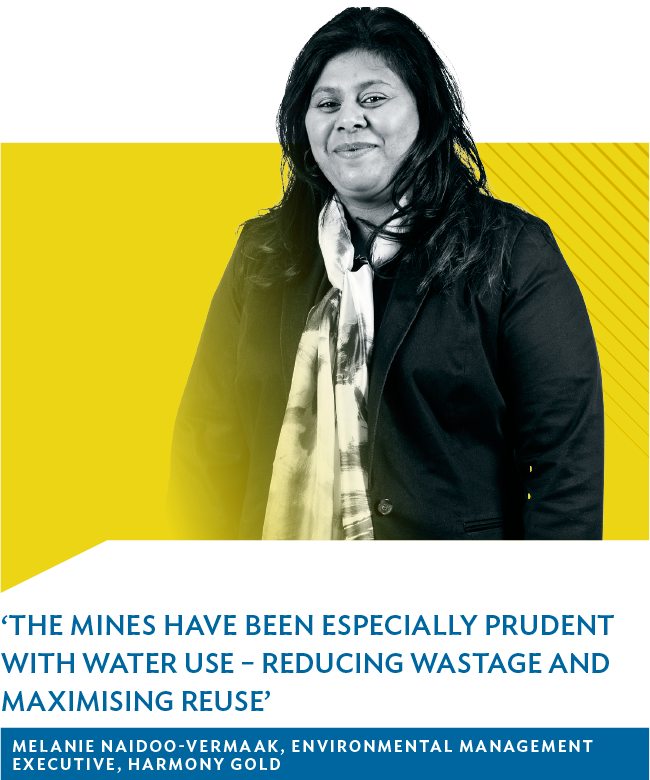 This water is then used in part by the municipality and the mine’s operations, effectively making the latter self-sufficient in terms of water supply. The plant meets around 12% of the water-stressed local municipality’s water requirements by supplying 16 million litres a day to the municipal reticulation system.

Harmony Gold is one of only eight companies worldwide and one of two SA companies, to be awarded an A-grade for water security and water management. This is an accolade that, according to Melanie Naidoo-Vermaak, Harmony’s environmental management executive, acknowledges the company’s commitment to following best practice in the field of sustainable water management.

The company’s strategy to reduce dependency on potable water and maximise its use of fissure and process water began in 2013. Moreover, the company has implemented a group-wide campaign intended to reuse process water and thus reduce dependency on groundwater by 4.5%, while also increasing the amount of water recycled by 5% by financial year 2018. As stated in Harmony’s Integrated Report 2016, 74% of water currently used in activities is recycled.

According to Naidoo-Vermaak, the drought currently being experienced in SA has not caused any business continuity risks to Harmony’s operations. ‘The mines have been especially prudent with water use – reducing wastage and maximising re-use,’ she says.

‘We have improved monitoring and maintenance on our pipelines, especially the potable water supplies, and have been working towards zero discharge at the operations for some time now.’

At its local operations, Harmony has various activities and strategies in place to aid water conservation. This includes a water treatment plant at Kusasalethu, which eliminates any discharge into the receiving environment, and helps maximise the reuse and recycling of mine water to reduce dependency on Rand Water. A similar plant is being constructed at Doornkop, which will be fully operational by February 2017.

‘At Kalgold mine, Harmony recycles water from the D-zone pit. In Gauteng, the operations are treating and recycling. In Welkom, we are maximising reuse of mine water – we are in fact involved in engagements with water treatment plant providers to evaluate the installation of two water treatment plants in the region,’ says Naidoo-Vermaak. Currently, Kalgold is Harmony’s only SA operation to draw water directly from a surface source aquifer. Other operations are supplied by bulk water service providers and municipalities, surface water run-off, water pumped to surface from underground operations, recycled water and borehole water. 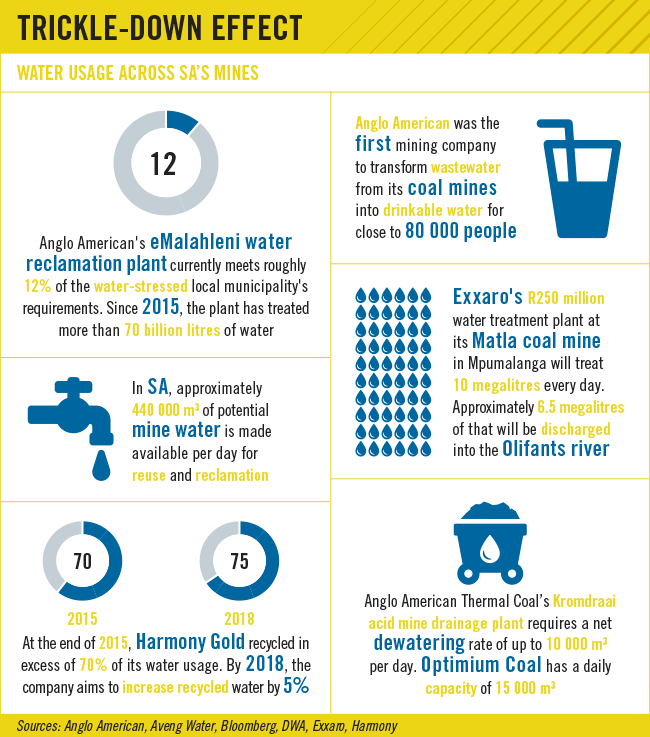 Exxaro, the second-largest coal producer in SA, takes a holistic approach to water management, with most of its operations having drafted water conservation and water demand management plans. Central to its water conservation efforts are three water treatments plants, which will have a total capacity to treat 17.5 megalitres per day when the final plant, located near the Arnot mine near Middelburg, begins operation in early 2019.

Exxaro CEO Mxolisi Mgojo says: ‘We are committed to protecting and improving water quality by ensuring the water we discharge is of the same or better quality than the original consumption. The Matla water treatment plant is a prime example of this approach.’

The Matla plant is a R250 million state-of-the-art water treatment facility at the Matla coal mine, able to treat 10 megalitres per day. Of this, 6.5 megalitres are discharged into the Olifants river, while the remaining 3.5 megalitres are used by the mine.

It may not have its own treatment plants, but Lonmin is remarkably proactive when it comes to water management, even employing specialised software for better decision-making. The company’s approach to water management is guided by its Integrated Waste Water Management Plan and the Water Conservation and Water Demand Strategy.

An important tool in all of this is the Integrated Water Balance (IWB) – specialised software that simulates scenarios and risk assessments conducive to making informed decisions about water use, as well as to gauge and manage strategy efficacy. The IWB also guides how best to transfer water from water-positive to water-deficit areas within Lonmin’s Marikana operations; increase understanding of water flows; reduce costs; and decrease potable water consumption.

SA does not have a single policy governing water use and/or reuse in mining operations. Rather, the country has numerous laws, regulations and policies providing either regulatory requirements or guidance. ‘The overarching guiding principle is fitness for use – the use being whatever you want to do with the water next,’ says Jo Burgess, research manager at the Water Research Commission.

‘This is a very pragmatic approach and in using it, we have saved ourselves masses of red tape compared to countries that have different policies for different sources of water. The downside of this approach is that it is fragmented, so for organisations trying to reuse and/or recycle mine water, the regulatory requirements can be unclear and it’s therefore difficult to navigate a path to water use with the proper permits in place.’

Burgess argues that, as far as water strategies or company policies are concerned, the most important consideration should be to implement a waste hierarchy of reduce, reuse, recycle. Asked whether she believes companies are acting responsibly in terms of their usage, Burgess says: ‘Like any other industry and every other country, we have a range – from responsible companies that meet all their legal obligations to irresponsible ones that do not, and everything in between.’

According to Burgess, there is a third locally topical driver – water scarcity. ‘Companies seeking assurance of water supply have made a big effort in the current drought to minimise their water intake demands, consumption and water wastage, and maximise their on-site reuse and recycling.’

Looking ahead, and with the water-scarcity situation in SA unlikely to abate any time soon, Burgess says what the industry needs most is a shift in mind set from externalising the costs of water intake and wastewater usage to internalising them. ‘The drivers listed above are powerful agents for progress towards increasing water efficiency but only if the real costs of wasted water are recognised.’