The CDC board is the accounting authority and reports to the member of the executive council for Finance, Economic Development, Environmental Affairs and Tourism, Mlungisi Gerald Mvoko. The CDC’s vision is to become the leading catalyst for the championing of socio-economic development, and its mission is to provide a competitive investment location supported by value-added business services that effectively enable socio-economic development.

The three key strategic goals of the CDC are to establish a preferred investment destination; secure financial sustainability and growth; and advance socio-economic development. In the 20 years since its establishment in 1999, the Coega SEZ has become one of the leading special economic zones on the continent. It is a gateway to African and global markets, a trans-shipment hub and Southern Africa’s most successful SEZ. The Coega SEZ has won prestigious awards in SA as well as the continent at large. They include the 2018 SA’s Top Performing Public Sector Award; 2019 SA’s Premier Business Investor of the Year Award; and the 2019 Best Regional International Trade and Development Organisation in South Africa. 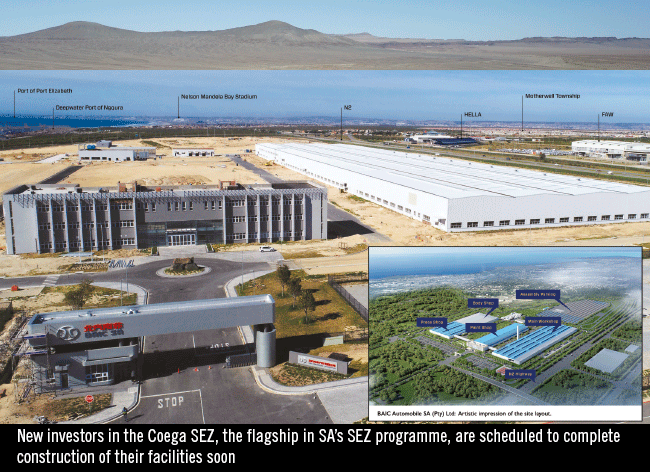 Not only has Coega won these prestigious awards, it has also been certified in ISO standards of excellence (ISO 9001-Quality, ISO 14001-Environmental, OHSAS 18001-Occupational Health and Safety, ISO 20001-Information Technology and ISO 27001-Information Security).

The SEZ has been praised by world leaders on its astounding achievements. ‘I’ve been to many developing countries and industrial development zones, the Coega SEZ is by far one of the best,’ Li Yuanchao, former vice-president of the People’s Republic of China, said on his visit to the Coega SEZ in 2016.

Coega has been named the flagship of the SEZ programme in SA. It is effectively the best functioning and most successful SEZ in the country, and boasts world-class infrastructure, management and corporate governance.

As a good corporate citizen, through the newly established Coega Development Foundation (a non-profit company), it has invested in various community-building projects, including its flagship driver-training programme, which assists unemployed youth and women obtain driver’s licences at no cost, and a maths and physical science programme aimed at assisting Grade 12 learners improve their results. Other programmes includes short courses, learnerships, traditional apprenticeships and new national occupational certificates.

The Coega SEZ is purpose-designed, following the cluster model, which strategically positions related and synergistic industries as well as their supply chains in close proximity to one another in order to maximise efficiency and minimise their turnaround times. The SEZ is demarcated into 14 zones, with a key focus on the following sectors: metals/metallurgical; automotive; business pro- cess outsourcing; chemicals; agro-processing; logistics; trade solutions; energy; and maritime.

In 2008, the CDC diversified its product offering to include the 216 ha automotive supplier park, the Nelson Mandela Bay Logistics Park (NMBLP), as well as a range of successful consulting services.

These include project management on the infrastructure and facilities management for government departments, such as the departments of Health, Basic Education, Public Works and Social Development, to mention but a few.

Investors that are operating from the NMBLP include BENTELER, Faurecia, Q-PLAS, Grupo Antolin, Hella, and REHAU – they are Tier 1 suppliers to Volkswagen South Africa. 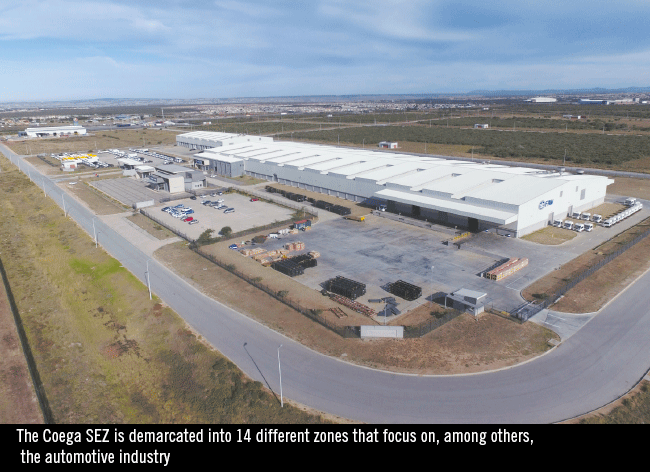 In the 2018/19 financial year, the CDC secured 18 new investors with an investment value pledges of R2.06 billion. These investors will be operational in the next few years.

Several of the new investors secured in the past few years are currently building their facilities, some of which will be operational by the end of the 2019/20 financial year. They include, among others, BAIC SA (automotive), R11 billion; Cemza Engineering Cement (chemicals and metals), R600 million; Agni Steels SA (chemicals and metals), R100 million; MM Engineering (energy and gas), R350 million; and Hella (automotive), R50 million.

Once construction of facilities is complete, these investors will increase the number of operational investors at Coega to 50.

According to the independent Muffin Report, which examined the impact of the Coega SEZ on local markets, production chains, exports, and employment and wages, most of the 45 operational investors in the SEZ and NMBLP created more than 100 full-time jobs on average.

Of these operational investors, 69% reported that their workforce increased over the past five years; 86% of operational investors revealed plans to expand their businesses in the near future; while some of them are either on their second or third expansion, such as Coega Dairy