Over the past seven years, the JSE’s Spire Awards have identified and recognised stakeholders in the capital markets that have, during the year under review, outperformed their peers. These are companies that are today operating in a financially challenging market but that nonetheless strive to offer the best services and returns for their investors. These companies, says Bernard Claassens, Manager: Fixed Income at the JSE, are thereby making a valuable contribution to the SA economy.

‘That value is, in so many ways, the foundation on which prosperity thrives and, in such a dynamic, broad and challenging market, this is no easy task,’ says Claassens. ‘Part of the recognition of receiving a Spire Award means that a winner is acknowledged by its peers of having qualities that reflect best industry practices.’ So much so, in fact, that the Spire Awards enjoy a unique position within the financial markets for credibility and process. ‘It is considered a benchmark for excellence within the commodity derivative, currency derivative, and equity and interest rate markets, with peers rating their performance against award recipients, and it is considered the highlight of the calendar year by capital market participants.’

The 2019 JSE Spire Awards gala evening was hosted at the JSE on 17 October. Over the years, the award categories have evolved to reflect the differing market conditions and practices, such as the introduction of new technologies, for example. This year there were 39 categories, as opposed to the 41 of 2018, that saw the introduction of the bond electronic trading platform. ‘We also merged three awards into other relevant asset classes to streamline the process,’ says Claassens. ‘As we continually strive to improve the award environment, we are also planning a revamp for the 2020 awards, which is likely to include significant changes.’ 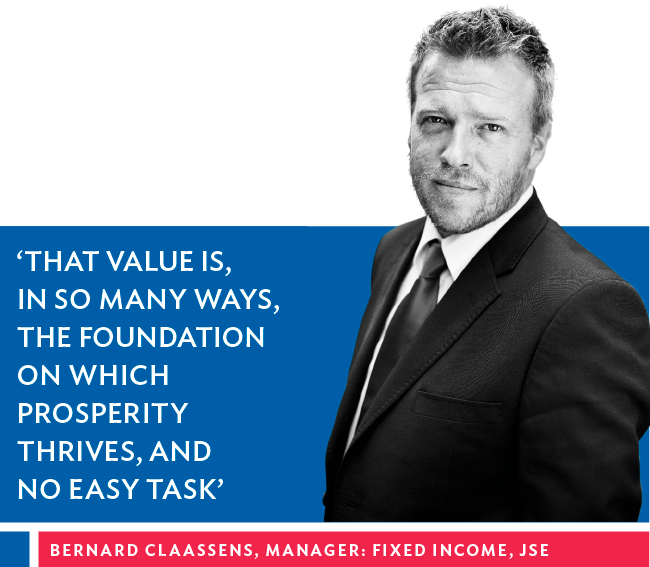 Participants are not nominated as all JSE membership companies are automatically eligible. However, there are restrictions in terms of voting eligibility; only institutional investors are polled to vote, excluding corporate entities, and only one vote is accepted for each position within each category. ‘Voting forms are created by Intellidex, an independent leader in SA capital markets and financial services, and which is also responsible for managing the voting process and collating the results once voting has closed. This ensures a completely independent and audited results package. Voting is anonymous while the process is ongoing, although all organisations that were eligible to vote are made public after the ceremony.’

The top three positions in each category are allocated one to three points based on trading volumes, with ties determined by the highest number of place votes obtained, ergo the highest number of 1st, 2nd or 3rd places. Each year, and it was no different for the 2019 awards, there were a number of capital market participants, such as banks, brokerages and state-owned companies, that seemingly outperformed others in terms of the highest number of awards achieved.

‘Although winners literally only receive a trophy, the JSE Spire Awards recognition highlights their outstanding qualities as leading growth businesses focused on superior outcomes,’ says Claassens. ‘This obviously improves reputations and is testimony to the effort and hard work they put in to growing the markets in which they participate.’