There is often opportunity when people become overly pessimistic at the bottom of a cycle, according to Nic Stein, a fund manager at Coronation. Stein is referring to commodity prices – the ‘key determinant’ to which he pays considerable attention. But he could well be talking about mining in SA in 2017 in general.

The industry has been engrossed by a negative narrative involving real headwinds, including regulatory uncertainty, soaring utility costs and an appalling relationship with government. However, there is still a great deal of value for the informed investor. More than this, 2017 has seen stability return to the sector as companies positioned themselves to deal better with uncertainty.

Michal Kotzé, PwC energy, utilities and resources leader (Africa) points out that in 2017, a balance sheet for the SA industry suggests a significant recovery. Across the sector, revenue from ordinary activities was up 13%, from R328 billion in the period from mid-2015 to mid-2016, to R371 billion in 2016/17.

‘The quality of the financial positions of South African miners is currently looking rather good,’ he says. According to Stein, the fund he manages, Coronation’s Resources Fund, achieved returns of 32% year-on-year to the end of October 2017. He adds that the mining industry is notoriously up and down, which is why it is classified as ‘high risk’ in all portfolios. ‘Our worst downturn was 58% in 2008/09, and our best 12 months was 100% from April 2001 to March 2002,’ he says.

These impressive returns over the past year do, to a degree, contradict part of the narrative emerging from the Chamber of Mines as presented at the National Energy Regulator of South Africa’s public hearings on Eskom’s proposed 19.9% increase in electricity tariffs for 2018.

The Chamber is correct in arguing that this would make things very difficult for gold and platinum operations. In those two subsectors, dominated as they are by deep-level operations, energy makes up 22% of input costs, whereas the comparable figure for coal mining is 3%. 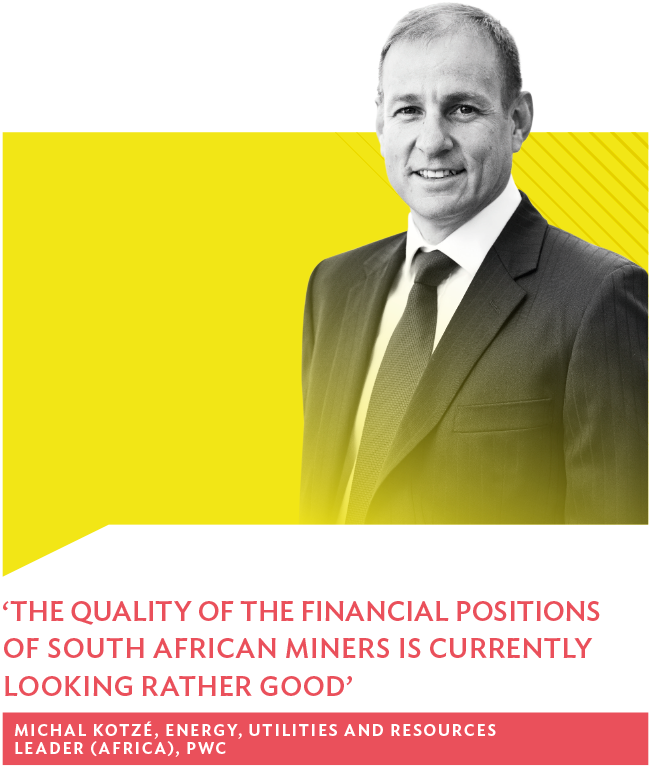 There is no doubt that the Chamber’s figures are alarming. According to its analysis, 66% of gold and platinum mines will be unsustainable if the proposed electricity price hike is allowed. But the Chamber is an advocacy organisation and its numbers must be interpreted. When they are, it’s clear the electricity issue is a bigger negative for gold (23% of input costs) than it is for platinum (11%).

Stein notes that ‘no-one in their right mind would sink a new platinum shaft under prevailing conditions’. Yet there is still money in the platinum subsector, and Coronation ‘owns a lot of Northam Platinum and some of Impala’.

Within SA’s platinum sector, Northam is unique in that it is currently strong enough to finance a large capital expansion from its own cash reserves. In 2017, it invested R1.3 billion in its Booysendal operation (which straddles the Mpumalanga/Limpopo border), mostly in order to increase its smelting capacity.

The figure was substantially higher than expected and clearly alarmed some of the analysts present at the mining company’s results presentation in August. But CEO Paul Dunne was able to assure them that with a cash pile of R3.8 billion, the company could afford the expansion.

It appears that in SA’s platinum sector, struggling Lonmin – which presented its $400 million 2016 rights issue as the only alternative to bankruptcy – is more the exception than the rule.

The Chamber has pointed out that mining GDP, measured in constant rand terms, declined between 1994 and 2016, from R242 billion to R226 billion. But this too requires context.

Ian Woodley, an analyst at Old Mutual Equities, explains that ‘although historical trends have been complex, coal, manganese, platinum and iron ore production have all increased since 1994’. The reason for the overall drop has been the dramatic decline in gold output figures over the same period, he argues. Gold production in SA fell from around 580 tons in 1994 to 130 tons in 2017.

Northam is far from alone in representing a ‘green shoot’ in SA’s mining sector. Kotzé points out that Sibanye-Stillwater’s November acquisition of a 38% stake in DRDGold is another significant event. DRDGold is a ‘tailings operation’ that re-processes old mine dumps at its gigantic Ergo plant, near Brakpan, east of Johannesburg. The purchase effectively consolidates the two companies’ tailings operations.

Part of what makes the acquisition so significant is that the market had believed Sibanye-Stillwater was in a strict consolidation period as it absorbed the $2.2 billion 2016 acquisition of Stillwater, the largest platinum mine in North America. The DRDGold deal is about consolidation, but the terms should not be interpreted to mean market inaction.

These activities are possible because SA’s mining companies by and large responded appropriately to the commodities crash in the second-half of 2015. They have sought to close or sell loss-making and non-core operations, develop new efficiencies and, above all, reduce debt. 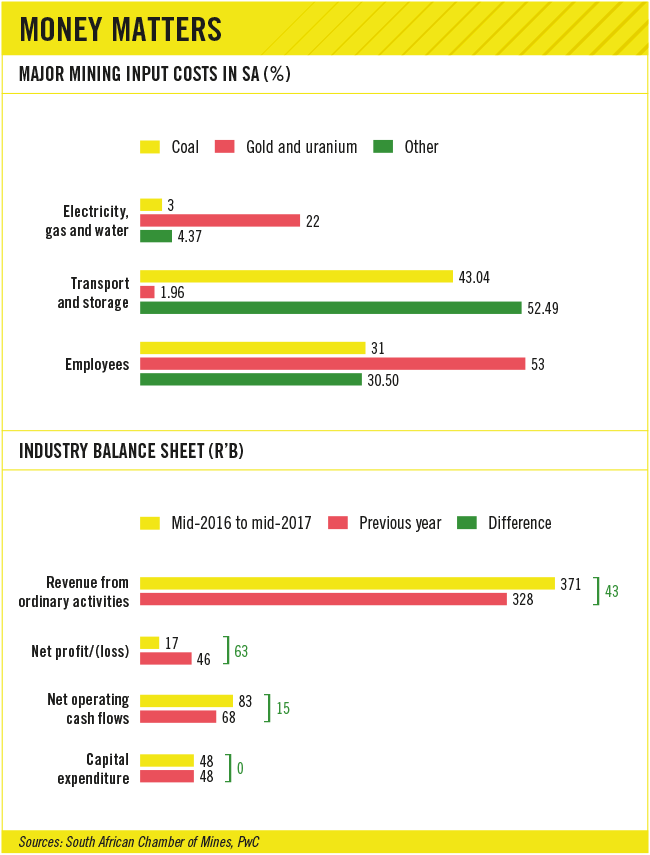 Anglo American has exemplified the process. In 2015, the company had a debt pile of $13 billion. But it moved aggressively to deal with this, selling assets all over the world. In SA, it disposed of its deep-level platinum mines (to Sibanye-Stillwater in 2015), retaining only a few assets – most notably the massive cash-spinning open-pit operation at Mogalakwena in Limpopo.

In 2017, it disposed of its holdings in the coal sector, selling its Eskom-tied thermal coal assets to a new black-owned entity, Seriti Resources. But more than its asset sales, Anglo has benefited from the recovery in resource prices since the end of 2015.

Kotzé points out that the international prices of coal and iron ore performed well between mid-2015 and late 2017. But while coal was at a two-year high in October 2017 ($85/ton), iron ore had come off the more than $70/ton it had traded at between April and September, and was down close to its 2016 average at $61/ton. The big impact of these prices on Anglo’s restructuring was that it buoyed up the performance of Kumba Iron Ore to a point where the company appears to have taken it off the auction block.

By July 2017, Anglo’s debt was down to $6.2 billion, ahead of the $7 billion planned. The company was able to resume dividends payment to shareholders six months ahead of schedule. Stein comments that ‘Anglo is effectively deleveraged’, while Woodley’s observation is that the company is in a strong position with ‘no new projects and good cash flows’.

Woodley points out this has given rise to a new set of circumstances that need to be understood by the prospective investor. ‘Many of these companies are now cash flush but they’re not investing in production,’ he says. Kotzé’s balance sheet for the SA sector shows capex for 2016/17 remains at 10-year lows of R48 billion. And according to Woodley, ‘the question is whether they are going to be putting their cash into capital investment or returning it to shareholders’.

The future of the Chinese economy is the major determinant. ‘It’s all about China,’ says Kotzé, while Stein adds that ‘part of the reason prices over-reacted on the downside at the end of 2015 was the lower growth prediction coming out of China’. Woodley argues that it is Chinese activity that has determined the higher coal price this year.

‘China took out a lot of its own more marginal operations and thus reduced supply,’ he says. But Chinese demand – supplemented by increased Indian demand – has remained high, ensuring comfortable prices for coal producers.

A time-consistency factor is in play here. Around the world, so much production was halted after the crisis at the end of 2015 that, with demand having held up, something of a supply bottleneck is almost certain to persist for three or four years.

‘In the next five to 10 years, we expect to see constrained supply, largely because prices are not going to recover to pre-2015 levels. But demand appears to have held up nicely,’ says Stein. There’s no need to sugar coat the negatives facing the SA industry, he says. But many factors are in favour of mining at present, and good returns can be made.