SA’s enormous contribution to the size of Africa’s total insurance market is best illustrated by the fact that over a three-year period to 2013, it grew by around $3 billion on a premium basis – a growth equivalent to the total size of the second-largest market (Morocco).

The penetration rate of insurance in SA is easily among the highest in the world but growth is far slower than in markets north of the Limpopo.

‘The insurance penetration is very low in Africa due to a small private sector and apart from natural resources, oil and gas, Africa lacks industrialisation,’ says George Bishop, CEO of Willis South Africa, a division of multinational risk management, insurance brokerage and financial advisory company Willis Towers Watson. ‘There is a large informal sector who has generally not purchased insurance.’

KPMG’s 2015 Insurance in Africa sector report states that the industry in SA still has scope for further growth in non-life insurance, as life insurance ‘densities’ suggest that the market ‘may well be close to saturation’. 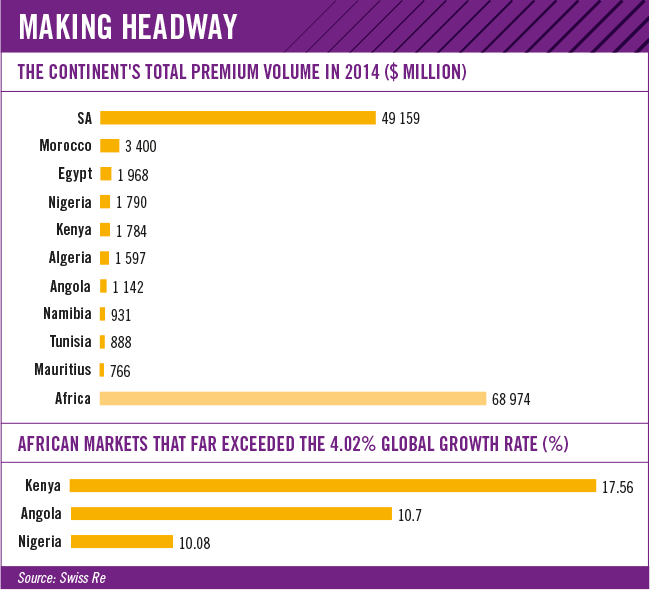 Elsewhere on the continent, the picture is obviously different. Financial services penetration remains low by comparison in most African (and specifically sub-Saharan African) markets. The KPMG report also cites eight reasons for low insurance penetration in Africa, aside from low income levels. These are low awareness and understanding of insurance across the different population segments; a lack of trust in financial service providers; insufficient incentives for multinational companies to enter African markets and develop the sector; and a shortage of reliable information, making it difficult to assess people’s risk.

Also cited were the poor legal and judicial systems; a lack of human capital and expertise; shallow financial markets make it difficult to raise enough money to capitalise insurance/reinsurance companies; and communities often opt for informal means of insurance rather than formal.

However, there is one broader megatrend driving financial services growth and penetration on the continent and globally: the growing middle class. EY sums it up well in a recent report: ‘From upscale shopping malls to new Western-style housing developments, the dramatic transformation in how people in sub-Saharan Africa live, work and plan for the future is plainly visible across the subcontinent.’

Prudential Africa CEO Matt Lilley told EY: ‘The number of people with disposable income is growing rapidly. These consumers ‘need to think about the future, to plan and save and protect their families’. He predicts that Prudential’s ‘business will grow at 20% per year in Africa for the foreseeable future’.

The expansion of the middle class shows no signs of stopping, despite the recent economic slowdown caused by moderating Chinese growth and a slump in commodity and energy prices. A 2014 study by Standard Bank on the 11 fastest-growing countries in Africa – Angola, Uganda, Nigeria, Ghana, Kenya, Tanzania, Ethiopia, Sudan, South Sudan, Mozambique and Zambia – states that by 2030, the number of middle-class households in these countries will rise from 15 million to 40 million.

These growing economies and the steadily increasing numbers of middle-class people who can afford insurance have attracted the attention of strong regional and global players in recent years.

The four major SA insurers (Sanlam, Old Mutual, MMI Holdings and Liberty) have operations across Southern and East Africa. The two giants – Sanlam and Old Mutual – have been active outside of their home market for longer than both MMI and Liberty.

Old Mutual’s emerging markets business – pri-marily focused on Africa (and long active in some markets) – has also been growing steadily in recent years. It operates in 14 markets and has been particularly active in Kenya. The company has spent billions and plans to merge its operation in that country with insurer UAP and microfinance outfit Faulu, both of which it purchased.

Acquisitions are becoming pricier, and MMI and Liberty have spent big to grow their respective footprints. Growth remains robust. MMI, for example, reported a 30% increase in new business volumes in the rest of Africa in the second-half of 2015.  The company did admit, though, that it was reviewing its presence in ‘certain smaller African markets’ and that it might exit them. However, it’s not only SA and European companies expanding on the continent. According to the KPMG report: ‘Moroccan companies are among the most aggressive of all the African countries in expanding operations overseas.’ Three of its largest insurers, Wafa Assurance, RMA Watanya and Saham Assurance (in which Sanlam also bought a minority stake) have been particularly active, with much expansion in West Africa, ‘a region that Morocco has historically had strong links with’.

Against this backdrop of aggressive expansion is the quiet tussle between Kenya and Nigeria, both vying to be regional financial hubs. There is no obvious competitor to the former but Ghana’s growth prospects and more accommodating environment, when compared to Nigeria, make it a compelling alternative. One might argue though that Kenya and Nigeria have reached critical mass and that any significant expansion or entry into East or West Africa will be via Nairobi or Lagos.

For insurance, distribution is key. Getting the mix of options and mechanisms right in underdeveloped markets will make the difference. As EY points out, in seven key markets (Ghana, Kenya, Malawi, Nigeria, Tanzania, Uganda and Zambia), ‘agents and brokers account for at least 50% of policies sold, because consumers still need to be educated as to the importance of insurance coverage’. Technology and the role of smartphones will play an ever-increasing role in both sales and administration of policies.

Bishop agrees, pointing to ‘simplified bespoke packaged products that can be paid by using a cellphone or digital application’.

Beyond the obvious benefits of insurance when it comes to managing risk, KPMG makes the broader point that ‘insurance facilitates investment by reducing the amount of capital that businesses and individuals need to keep at hand to protect themselves from uncertain events’. 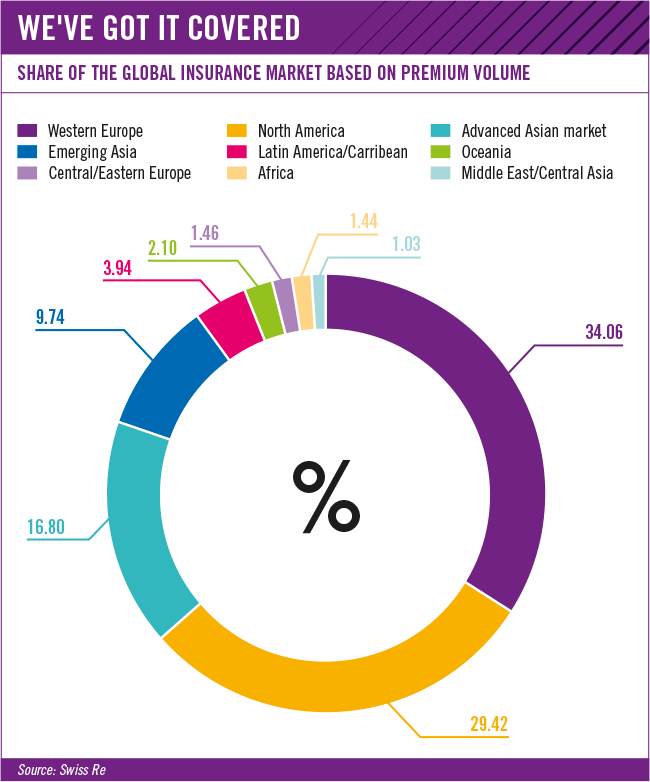 UK think tank Overseas Development Institute (ODI) goes one step further, highlighting the link between insurance and savings. In a working paper, ODI researcher Judith Tyson argues that ‘life insurance has the potential to both mobilise domestic savings and investment, and to create employment and enhance household welfare, thereby helping to drive economic growth and development at a crucial time in sub-Saharan Africa’.

Given the shortage of long-term investment capital in the region, the long-term nature of life insurance makes it a useful source of funding, particularly as investments will be in local currencies. However, this is more an effect than a driver of the growth in the insurance sector.

EY points out that while Africa holds myriad opportunities, its ‘markets and their prospects are hardly uniform’. It advises four key areas for development of the sector, namely a ‘focus on cities first’; that ‘consumer education [is] crucial’; ‘invest for the long term’; and that ‘it is critical that the [regulatory] framework is improved in order to support the growth of trust, inclusion and education about the value of insurance in the rapidly growing economies’ on the continent.