Mergermarket’s annual survey Deal Drivers Africa found 290 deals were completed in 2015, the highest volume since 2007 (before the global financial crisis). While only a 1% increase from 2014, it is notable that this level of activity was sustained ‘despite severe headwinds from a slow-down in the Chinese economy and currency woes in South Africa and Nigeria, the continent’s two largest M&A markets’.

Is this the peak or is there more to come? Sure, the headline numbers grew but much of the activity – 88% of deals – was in the mid-market, up to $250 million.

Gavin Davies and Hubert Segain, partners at global law firm Herbert Smith Freehills point to the sharp contrast with 2014, ‘which saw three mega-deals aggregate a value of £5.5 billion’. According to their regional overview report, there were ‘no African deals above $1 billion … and inbound M&A was 46% lower in the first five months of 2015 compared to the same period in 2014, marking a 13-year low’.

Deepa Vallabh, head of cross-border M&A: Africa & Asia at Cliffe Dekker Hofmeyr says: ‘There are a number of PE funds entering the market on mid-sized transactions because they
see the potential growth opportunity, but also because of the potential risk, sizes are often more conservative. Larger targets are more reluctant to divest in a downturn market given that the return will not be attractive to shareholders.’

Sub-Saharan Africa is expected to grow by 4% this year according to the IMF, 0.3 percentage points lower than its previous forecast in October 2015. But in a global context, growth in this region remains above average. The IMF points out that ‘growth in emerging market and developing economies – while still accounting for more than 70% of global growth – declined for the fifth consecutive year’. 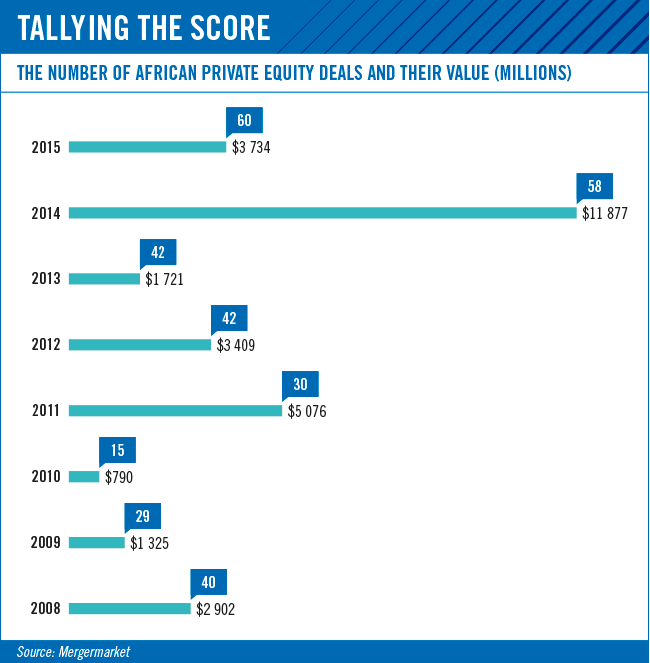 Domestic (and regional) deals tend to outnumber inbound ones, but with the Mediclinic/Al Noor transaction technically a buyout of the SA hospital group (despite the acquiring entity being significantly smaller), deal value was somewhat distorted, with $70 out of every $100 being inbound, according to Mergermarket. However, Davies and Segain point to what they describe as a ‘significant increase in outbound and intra-African M&A’ in 2015. ‘Notably, much of this swell in activity is driven by South African companies, responsible for over 80% of outbound Africa M&A activity in 2015.’

‘The geography and the advantage of doing business for many years in different African jurisdictions means there is a better understanding of risk and an understanding of the markets, which lends itself to quicker investment decisions by SA companies,’ says Vallabh.

‘I think there is a lot of interest from foreign investors but the realisation from interest to investment is a longer cycle because of the level of diligence and comfort such investors need to undertake to satisfy themselves and their shareholders in relation to the investment.

‘However, I think that the tide for this will turn in the near future as the level of information, transparency and opportunities increase.’

There are four mega-sectors for dealmaking activity on the continent: resources (or, what Mergermarket terms more-broadly as ‘energy, mining, utilities’); telecoms; consumer goods; and finance. The main driver of these – natural resources – is typically the biggest contributor to M&A activity on the continent. It accounts for practically a quarter of total deal value in 2014/15 – between 2008 and 2013, it was closer to 40% of overall value.

Despite a commodities glut – or rather perhaps because of it – there is an acceleration in deal flow in the sector, as global miners begin to offload assets to (mostly) local players.

‘Market analysts expect to see an upsurge in M&A in the oil and gas sector in the near term as over-leveraged companies look to divest struggling assets,’ say Davies and Segain. This isn’t dissimilar to the situations in most other markets.

While Africa, as an investment destination, has continued to grow over the past decade-plus, ‘undoubtedly, the key foreign player in Africa’s recent growth story has been and continues to be China, the continent’s single largest trading partner’, say Davies and Segain.

China’s interest has been in extractive sectors (like mining), but there is a deliberate shift as it refocuses its economy. Its sovereign wealth fund has been particularly active in the infrastructure and utilities space of late.

The continent has more recently attracted the attention – in earnest – of private equity investors. Law firm Allen & Overy points to the increasing number of private equity houses that ‘have established specialist Africa funds to pursue opportunities, including Carlyle, KKR, Blackstone, Helios and Dubai-based Abraaj. The appetite to invest is certainly there but a scarcity of good assets remains an obstacle, albeit probably a relatively short-term one’.

Carlyle notably raised an Africa-focused fund in 2012, and it and Blackstone have partnerships with Nigeria’s Dangote Industries, first sealed in 2014. Meanwhile Helios closed a $1 billion Africa fund last year.

‘The source of the capital being committed to Africa-focused funds also indicates that investors in the West view private equity as a viable new avenue for investing in Africa,’ say Davies and Segain. ‘The majority $990 million that Dubai-based Abraaj Group raised for its third sub-Saharan Africa fund came from North America and Europe.’

The preferred destinations for private equity investments remain SA, Nigeria and Kenya, but markets such as Ethiopia and Ghana are emerging as attractive.

Davies and Segain point to two inhibitors to continued growth in this space: the small number of true ‘large-scale deal opportunities’ and the limited ‘exit paths available to investors’, given the size of most equity markets on the continent.

It’s not only private equity investors doing the buying. Mergermarket cites a finance director of an SA company that participated in its survey who says that ‘cash-rich corporates are definitely occupying a significant share in the deal market using their strong reserves and influence over the capital markets. Meanwhile in-country consolidation has increased over the years, especially in the SME market, which is also growing in size’.

Deloitte echoes this view, pointing to countries, such as SA, that ‘have numerous cash-rich corporate acquirers who are likely to drive domestic deal activity with companies looking to increase their top line and profitability’.

Valuations of transactions tend to remain relatively rich. A 2013 study by Deloitte found a measurable premium on acquisition multiples, with the main reason appearing to be investors’ ‘high expectations around growth prospects for African companies in the consumer markets and telecommunications sectors. These growth expectations are so significant that the value implications outstrip those of the relatively higher risk of investing in Africa’.

Given the knock-on effects of the slowdown in China, and the fall in commodities prices and their impact on growth in most African economies, we may yet see premiums and possibly even multiples retract somewhat. 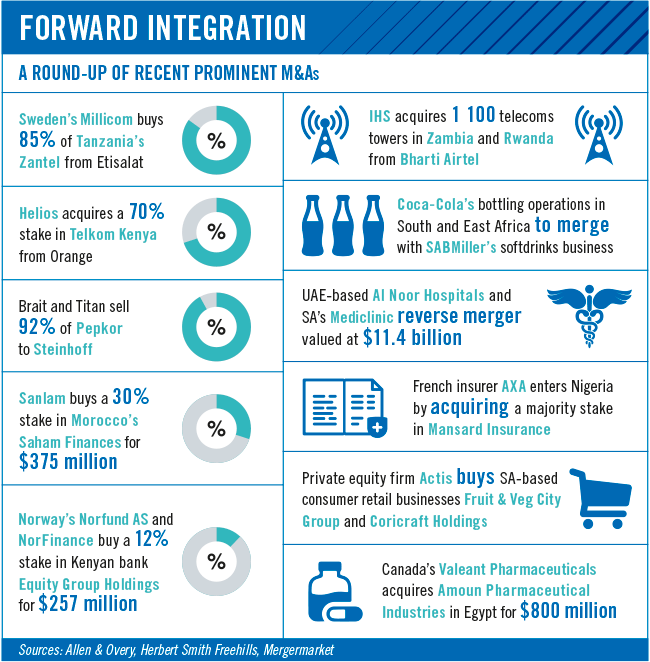 As in other developing markets, deals aren’t easily done in Africa. Deloitte points to four main challenges in the region: finding the right partner; financial disclosure and due diligence; local ownership requirements; and the political environment and stability. The first two are common in many markets, not only developing ones – and are certainly not unique to Africa.

However, many countries in the region have adopted laws that ‘typically require a minimum percentage of local shareholder ownership’, according to Deloitte, and it’s ‘important to maintain awareness of noteworthy events such as elections and to understand their potential effect on the transaction timetable. Investors are required to have an understanding of the political association of the major stakeholders, both business partners and regulators’.

Navigating these complexities has arguably become easier as markets continue to mature, and professional advisors (be it in the legal or consulting space) become more adept and build up experience.

Mergermarket maintains that 2016’s outlook in terms of dealmaking is positive. ‘The election in Nigeria, an M&A powerhouse on the continent, has passed smoothly, which will give dealmakers confidence and more certainty. There is a good pipeline for deals that has built up and could now start to flow as investors begin to scout opportunities, including distressed assets in the energy segment.’

Davies and Segain are a little more circumspect. ‘The sunny growth outlook for Africa has been adjusted down. We expect the current turmoil to continue to dampen to some extent global appetite for M&A in Africa in the short to medium term.’

This is not necessarily all bad, as ‘a decrease in competition will likely see prices of overvalued assets reduce. This could, ironically, help generate M&A activity’.