Disclaimer: this is not easy reading. The country’s education system is in distress. It is failing SA’s youth by not equipping them with the skills to fulfil their potential in life and is one of the root causes behind the alarming 64.4% youth unemployment rate. A dysfunctional education system means SA is unlikely to achieve UN Sustainable Development Goal 4 – namely, free quality education for all – by 2030.

The problems, however, are not one of intent nor government investment, as SA already spends a proportionally high percentage of its annual budget on education: 20% of the total national budget in 2020/21 (R385 billion of the R1.95 trillion), with the bulk (R262 billion) going to basic education. The problems are indeed structural.

‘With the exception of a few well-functioning pockets, the education bureaucracy at provincial level – which includes teachers and school principals – mirrors the rest of the civil service; characterised by nepotistic appointment practices, low capacity, poor discipline and non-existent consequence management,’ says Nick Taylor, senior research fellow at JET Education Services. ‘This is half the problem underlying our uneven and generally mediocre school performance. The other half is accounted for by poorly educated teachers, particularly at the primary school level, with “qualified” teachers exhibiting low levels of literacy, unable to teach reading and ignorant of the primary school mathematics curriculum.’

In response, the private sector – whose skills pipeline is strongly impacted by weak public schooling – has been strengthening the education sector in two key ways, namely through independent companies such as ADvTech, Spark, Curro and Future Nation Schools (which provide quality ‘cost-sensitive’ education) and through CSI. SA companies spent R10.3 billion on CSI in 2021, and for the past 20 years, education has been the most popular cause. However, expenditure in this sector declined from 50% in 2020 to 39% in 2021, according to Trialogue’s 2021 Business in Society handbook. This is due to COVID-19, as companies diverted some of their funding to disaster relief and food security.

The pandemic put additional stress on teachers – and on all other aspects of the education sector, which was already woefully under-performing before COVID-19 forced schools to close and millions of learners to stay at home. 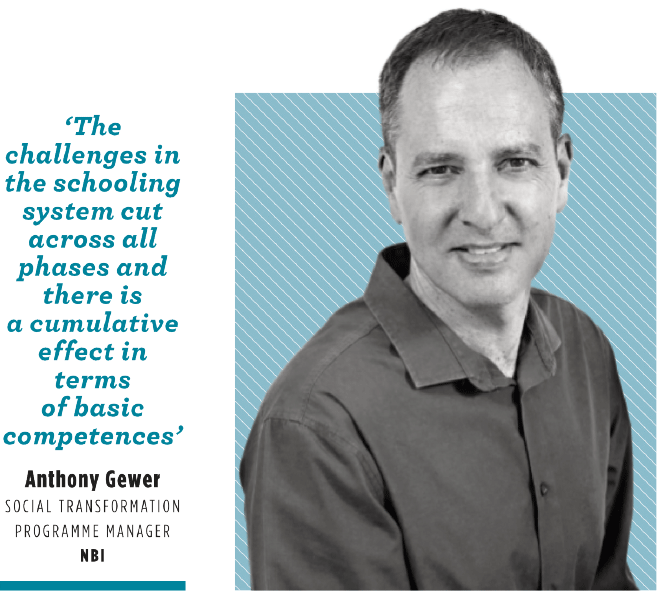 For example, 78% of Grade 4 children in SA could not read for meaning in any language, compared to the international benchmark of merely 4%, according to the most recent PIRLS Literacy report. These results correlate with the average school wealth – in the poorest 10% of schools, just 11% of Grade 4 learners can read at a basic level while this number rises to 71% in the richest 10% schools. The situation in maths is similar, with 61% of Grade 5 learners unable to do even basic maths, according to the TIMSS survey.

After the lockdown, learners suffered additionally as schools reduced face-to-face teaching and implemented rotational timetables to comply with social-distancing regulations. These concerns are global, not only local, although affluent nations – and some better-resourced schools in SA – were able to continue teaching throughout the pandemic via virtual channels and distance learning.

‘The unpredicted closures of our schools, and the unplanned disruptions to teaching and learning have resulted in the reversal of gains made in the last 20 years,’ Angie Motshekga, Minister of Basic Education wrote in an August 2021 tweet, adding this ‘would have a long-lasting negative impact on society in general, and not only on the entire education sector’.

The figures are grim. Most primary school learners in SA lost 70% to 100% of a full year of learning between March 2020 and June 2021, according to the National Income Dynamics Study – Coronavirus Rapid Mobile Survey (NIDS-CRAM). It found that the pandemic has put children not only at greater risk of lagging behind and losing learning, but also of emotional-health deterioration and food insecurity (more than 10 million SA children rely on daily school feeding schemes). NIDS-CRAM estimates that between 650 000 and 750 000 learners between the ages of 7 and 17 have dropped out of school in 2021.

High dropout rates have been a ‘hidden crisis’ for years, which the pandemic has brought to the forefront. In SA, four out of 10 children starting school don’t finish their schooling. Taking the Grade 1 cohort of 2008 as an example – just 60% of learners went on to write matric in 2019, even fewer (37%) passed their exams and only 13% entered university.

The Zero Drop Out Campaign uses these and other stats in an attempt to elevate the problem by turning it into a national priority to keep children in school through policy change and co-ordinated action, thus avoiding a future of unemployment and poverty. Launched by the MG Murray Trust, the nationwide advocacy campaign aims to halve the dropout rate by 2030. It’s calling for a standardised definition of ‘dropout’ and better data collection to create an accurate picture of the problem. Innovative approaches include an early-warning toolkit to identify at-risk learners and provide the necessary support to keep them in school. This can be achieved, for example, by having one caring adult to support a learner through school (this could be anyone – a parent, teacher, sibling or friend); tracking learner attendance and performance at school; and ensuring foundational literacy and numeracy.

‘The challenges in the schooling system cut across all phases, and there is a cumulative effect in terms of basic competencies in reading, writing and mathematics,’ says Anthony Gewer, programme manager of social transformation at the National Business Initiative whose work focuses on youth employability and strengthening the pathways for marginalised youth through technical vocational education and training. 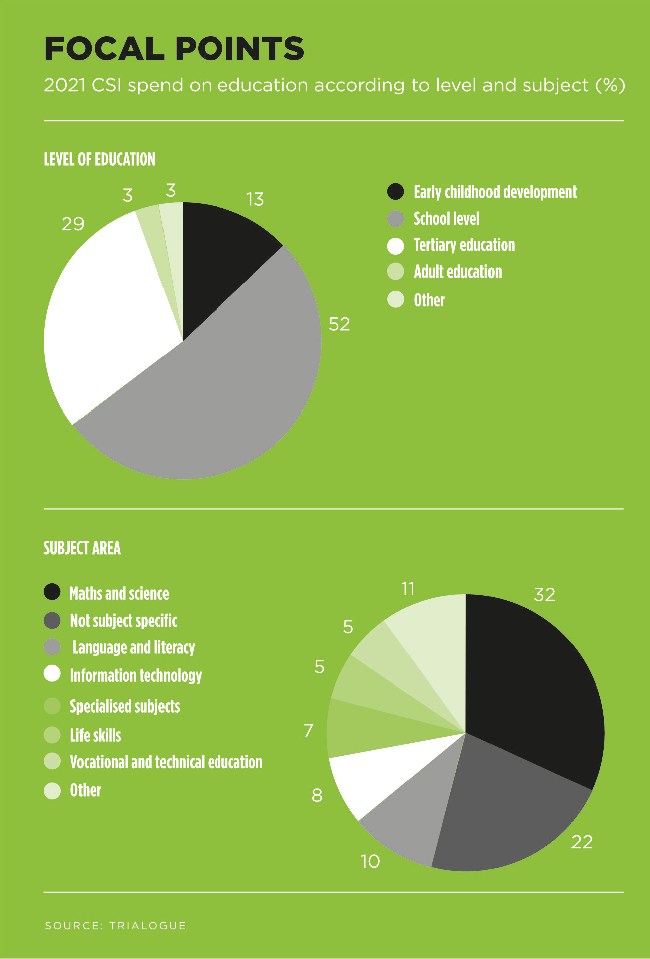 ‘There is universal attendance until Grade 9 but a significant drop-off in enrolments in the senior secondary phase,’ he says. ‘As there is significant value in the full completion of basic education in terms of employability, a focus on the senior secondary phase would be advantageous so more young people can gain a further education and training exit certificate and qualification. We are seeing increasing demand for secondary education across the continent as a means to effective labour market transitions although the schooling system and the post-schooling system struggle to cope with this demand.’

‘The later in life we attempt to repair early deficits, the costlier the remediation becomes,’ says Nobel laureate James Heckman, a US economist who argues that globally too much money is invested in the later phases of educational development when it’s often too late to provide significant value. The so-called ‘Heckman Curve’ proves that the earliest investments in children yield the highest rate of economic returns.

SA is planning to improve early childhood development by making the two years prior to Grade 1 compulsory – first Grade R for children turning six years of age, followed in due course by Grade RR for those turning five.

However, the private response is ramping up with the number of independent schools continuing to grow and cater for broader learner demographics than ever before, as parents have become disenchanted with the state system and are willing to make financial sacrifices. The target markets for education companies has changed, and low- to mid-fee schools are opening in areas not historically associated with private education – such as affordable Curro schools in Mamelodi, Cosmo City, Wilgeheuwel and Soshanguve, where Setswana is a language option and learners have their own tablets. The education company has rapidly expanded since listing in 2011, growing from 12 campuses with 24 schools to currently 76 campuses with 178 schools, 20 of which are ‘cost-sensitive’ Meridian and Academy-branded schools.

‘We offer models for quality independent schools at different price levels,’ said Andries Greyling, Curro CEO, when presenting the results for the six months ending 30 June last year. ‘Our school models are healthy and serve meaningful market segments. We focus on delivering affordable, quality education to the children of Southern Africa. Our centralised services drive operational efficiencies, with the majority of our schools being cash generative.’

Despite a difficult 18 months, with higher levels of bad debts and fee discounts due to COVID-19, revenue was up by 12% and the average number of learners had increased by 7% (from 61 746 to 66 167; 9 700 of those in Meridian and 12 700 in Academy schools). In addition, Curro and AdvTech, are among listed education companies that have enterprisingly launched affordable online schools recently to meet the demand in digital learning.

One hallmark of low-fee private schools is how tech-savvy they are. Bridge International Academies is one of the fastest-growing providers globally, with genuinely low-fee schools serving destitute communities in Kenya, Nigeria, Liberia and Uganda, in addition to Asia. The school management uses SMS and WhatsApp to communicate with parents, send tests to learners and collect fees.

In SA all schools need to be registered with the Department of Basic Education (DBE); therefore a good relationship between private and public players is important. A Trialogue webinar on ‘hard-learned lessons in education programming’ advises corporates wanting to collaborate with the DBE to understand protocols and hierarchies, and to engage at both provincial and national level. It suggests companies should find points of alignment with department strategy rather than push its own agenda. 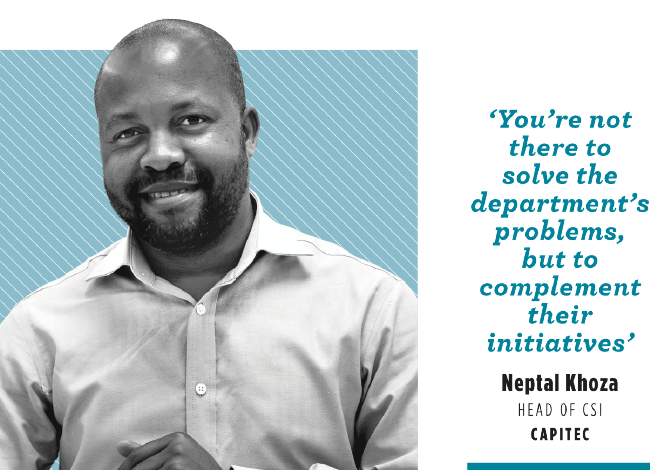 Here it’s useful to have a ‘disciple’ to drive one’s organisational message with the department and sign an MoU with measurable outcomes, according to Neptal Khoza, head of CSI at Capitec. ‘You’re not there to solve the department’s problems, but to complement their initiatives.’

Taylor also see the benefits of lobbying government to professionalise the civil service, as well as to raise the standard of the initial teacher training at university level. Co-operation is crucial when working towards a common goal. And it’s just as important to share and learn from mistakes, he says.

‘Interventions supported by the private sector need to be accompanied by rigorous evaluations and the dissemination of the results, however disappointing they may be,’ says Taylor. ‘We learn as much from negative lessons as we do from success, and alerting others to inappropriate designs may save millions and stimulate the design of effective programmes. The DBE is leading the research-and-development charge towards these ends and is an important partner in this quest.

‘The cost of ignorance is incalculable.’ That refers not only to private and public collaborations, but also to the generation of young South Africans who deserve a good-quality education to create a brighter future for themselves, their families and the nation.