When 2 300 participants registered on the JSE’s Virtual Trading Game (VTG) platform committed to participating in the JSE’s third public educational-game programme in September 2021, it confirmed to Ralph Speirs, the JSE’s CSI Officer, that the bourse is effectively tapping into the SA public’s need for a better understanding of the characteristics of stock-exchange trading and financial markets.

‘The VTG concept tackles, head-on, the erroneous belief that financial markets require extraordinary financial skills. Our latest VTG proves this wrong on so many levels,’ says Speirs. ‘Firstly, the platform is designed to allow speculative trading with virtual money, so any fears of loss of capital are immediately voided. Secondly, and this is likely the biggest takeaway, is how simple the process is to place trades, which opens the eyes of many to the world of investing.’

The latter is significant because, regardless of the fact that the JSE VTG is a game, it also serves as an educational platform, whereby outside of the competition (which last year ran from September to end-November), it also presents module opportunities to learn about the stock market and how to create a portfolio, albeit virtually.

‘Financial literacy has long been a JSE imperative,’ says Speirs, who is one of those responsible for the current success of yet another JSE virtual game, the 48-year-old JSE Investment Challenge, which focuses purely on demystifying the JSE for – and advancing the financial literacy of – high school and university students. ‘Similar to the Investment Challenge, each entrant of the VTG is provided with a virtual R1 million to invest in JSE-listed companies,’ he says. ‘But it must be understood that participants, no matter how well their portfolio performs, do not make any “real” money, except for the first-, second- and third-place winners, who receive Satrix vouchers valued at R30 000, R20 000 and R10 000 respectively.’ 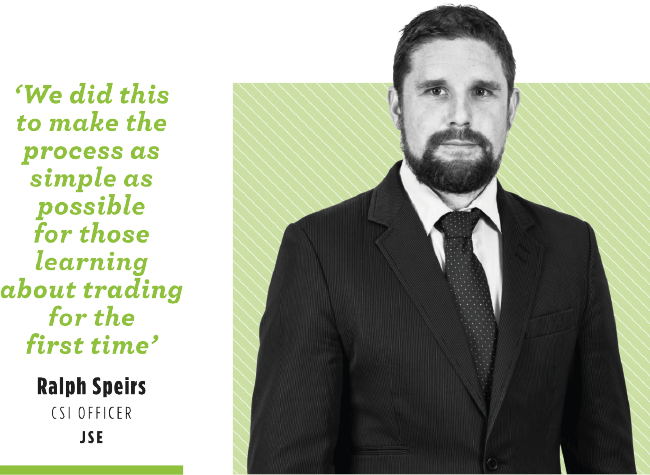 The winner of the latest event made a return of 24.33% in the active three-month period. Jacob Rossouw, from Gauteng, did so by following the simple trade learnings the JSE provides on the platform, which focuses solely on JSE-listed companies and ETFs.

‘We did this to make the process as simple as possible for those learning about trading for the first time,’ says Speirs. ‘However, as the competition grows over the years, we will add other instruments that will enable the general public to learn about all the facilities the JSE can offer in terms of buying and selling.’

One of the daily highlights for participants is tracking the performance of their investments. A scoreboard is created for each individual, which ranks them based on their total return. This does not mean, however, that the player needs to make daily trades, but they must do a minimum of 15 transactions over the competition period. Those transactions must also be assured of meeting at least 75% of the starting capital in order to be eligible for the JSE VTG prizes.

‘We are exceptionally happy with the number of participants that use the platform, even after the competition closed,’ says Speirs. ‘Through the VTG, the JSE is playing an active role in creating a financially literate society in our country.’