Africa’s startling growth figures over the last decade have generated enormous international business interest in the continent, which offers returns not available elsewhere. In 2014, Standard Bank’s rest of Africa operation (i.e. beyond SA) achieved a return on equity of 21.5%. Given that rates of return in other parts of the world are poor, it is not surprising to see that private sector funds are being mobilised on a significant scale.

A much-quoted World Bank 2009 diagnostic calculated that sub-Saharan Africa requires infrastructure investment of $93 billion every year for at least four years to meet existing and projected demand. A subsequent 2015 paper by the bank pushed this number up to $97 billion. It measured current infrastructure capacity against predicted future demand, calculated using indicators such as mobile phones per head of population, kilometres of road per capita and the number of households with services.

Financing Africa’s infrastructure gap was identified as a priority by the World Bank and other major donors in 2009, a position reaffirmed in 2014. The biggest need is for energy generation infrastructure (about 40% of the total requirement) followed, in order, by transport, telecoms and water. That $97 billion per annum is a big ask, even though it is only a small proportion of the $3 trillion the world is expected to spend on infrastructure in the same period.

According to Solomon Asamoah, African Development Bank (AfDB) vice-president of infrastructure, private sector and regional integration, in 2014 infrastructure investment in Africa came to about half the needed number – $45 billion.

Speaking at a Financial Times event last year, Asamoah was optimistic that in 2015, investment would amount to some $60 billion. However, there are clearly bottlenecks in the system and these will have to be cleared if the continent is to achieve the ambition of infrastructure-led growth articulated in the AU’s 2010 Programme for Infrastructure Development in Africa. 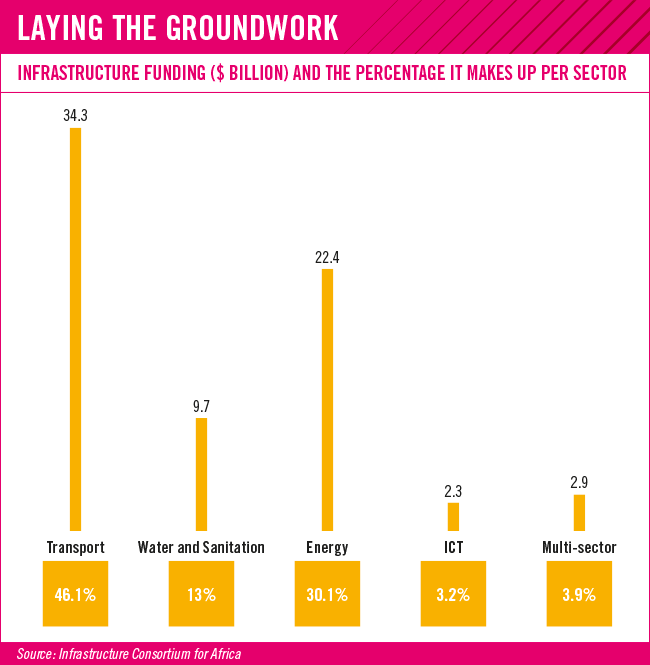 Paul Runge, projects and development finance director at consultancy Africa House, points out that most large infrastructure projects are financed by consortia. This way, no single funder carries all the risk. Indeed, it is the self-proclaimed role of the international development finance institutions – the World Bank, the International Finance Corporation (IFC) and the AfDB – to fund the riskiest parts of each project. Runge considers the role of the IFC, the lending arm of the IMF to be critical.

‘The IFC never takes a majority stake in any project,’ he says. ‘But where it puts up money, the other investors come running. It mitigates risk by its presence alone.’ The IFC has increased its investment in Africa from about $1 billion five years ago to around $5 billion/year now.

According to the Brookings Institute, about half of Africa’s infrastructure investment comes from private sources. This has surged since 2009 – 45% of it has been into the energy sector, which has displaced telecoms as the space most attrac-
tive to the private sector.

In 2014, about 35% of the remaining investment came from the major multilaterals and aid agencies while Chinese sources accounted for about 20%. Dedicated private infrastructure investment funds have increasingly become the main channel for this finance. Runge points out that major SA insurers such as Sanlam and Old Mutual have each invested in several funds.

These funds offer specialised management and experience. Old Mutual’s Africa Infrastructure Investment Managers (AIIM), with $1.2 billion in five different funds, was founded as a joint venture between SA insurance giant Old Mutual and Sydney-based Macquarie, in 2000. Acquired outright by Old Mutual in December 2015, the fund builds on extensive experience, especially in toll concessions and cellular telephony infrastructure. Macquarie, one of the world’s largest infrastructure managers provided the initial expertise and skills impetus but the fund is now managed from Cape Town.

More recently, AIIM has moved into the energy space and has financed gas-generated power plants in Nigeria and Ghana. In September 2015, AIIM announced that it would be developing a pipeline of small and medium hydropower plants in Côte d’Ivoire, Cameroon, Gabon, Ghana and Mozambique. The choice of sector (energy) and the chosen means (renewables) are representative of the most productive thrust in African infrastructure at the moment.

In SA, the financial institution with the biggest African footprint is Standard Bank, although much of its presence is in retail. It is involved in various African infrastructure funds, with a total value of close to $2 billion.

Operationally, the bank looks to follow where the US government’s Power Africa initiative has pioneered investment, issuing guarantees for energy projects in Ethiopia, Ghana, Kenya, Liberia,  Nigeria and Tanzania worth some $7 billion. Each guarantee has generated about double that amount in private investment, says Standard Bank.

Road infrastructure is a major chunk of Africa’s infrastructure deficit. Paul Boynton, CEO of Old Mutual Alternative Investments, who oversees AIIM, points out that transport – which also includes ports and railways – is likely to be the continent’s second-biggest infrastructure investment sector, after power. ‘The cost of getting goods to market in Africa is three or four times what it is in more developed regions,’ he says.

One of the big hurdles is cross-border management. The 1 022 km Abidjan-to-Lagos motorway has been identified as having a potentially catalytic effect on West African trade. Yet despite many years of planning, only 42 km have been completed, all that within Côte d’Ivoire.

Boynton doesn’t comment specifically on the Abidjan-Lagos project but he does provide some insight into why it has taken so long to get this project off the ground. ‘[African] governments need to plan and put out a well-structured investment plan,’ he says. To attract capital, a ‘stable pipeline of opportunities’ must be in place.

Boynton points to SA’s renewable energy programme as an exemplar of such a pipeline. ‘Capital can be mobilised from different areas,’ he says. The challenge for Africa is that ‘there needs to be predictability about what we are trying to attract capital into’.

The biggest hurdle may well be project-preparation finance, essentially the professional fees that must be made available upfront and are essential to the construction of a project pipeline. This is a high-risk, once-off ‘sunk’ cost that may
or may not be recovered through user fees once the infrastructure is operational.

In this regard, the most significant recent development is the AfDB’s Africa50 fund, launched in June 2015, with $830 million subscribed by African governments. On the back of this the fund hopes to reach $10 billion, tapping non-African sovereign and pension funds. 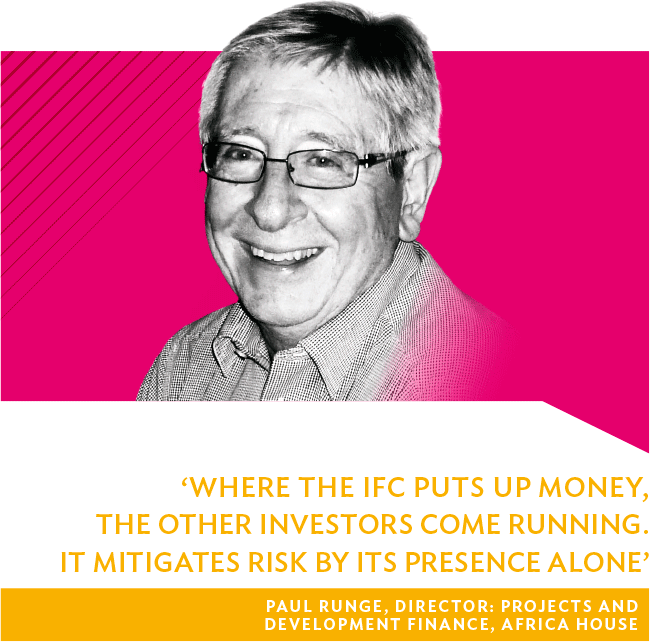 According to Tas Anvaripour, head of infrastructure finance at the AfDB, one of the fund’s main goals is to provide project-preparation finance for Africa’s big infrastructure projects. In the past, she says, it has taken seven to 10 years for projects to reach ‘bankability’ (the point at which private financiers can expect to be interested). The fund’s objective is to reduce this period to three years.

Africa50 is not the only source of project-preparation finance available. Many have high expectations of the new BRICS Development Bank, hoping that it will step into this space. There is also recent experience of some innovative ways of tap-
ping into the vast sea of ‘diaspora capital’, the wealth of Africans working outside the continent. This fund already provides the second-biggest capital flow into the continent, mostly in the form of remittances.

Runge provides an example of how these funds have been mobilised for project-preparation purposes. ‘The first funding for Ethiopia’s Grand Renaissance dam was raised by crowdsourcing, much of it from the diaspora,’ he says.

The Grand Renaissance (formerly Millennium) dam is an immense hydroelectric project on the Blue Nile. Reportedly currently half-finished, it had a controversial start in 2011, with Egypt (downstream) opposed on the grounds of water security and large dams being unpopular among multilateral funders. The government of Ethiopia raised about two-fifths of the required capital from Chinese sources but was forced to look internally for the remainder.

The Ethiopian government appealed to its citizens resident offshore, most in Arab countries. It offered a bond, available in multiples of $50 and that paid interest of between 4% and 5%, with the option of using it as collateral in Ethiopia.

The bond is an interesting experiment and its first tranche (known as the Millennium Bond) was not particularly successful. However, while the bond was on offer, donations poured in, many pledged by text message. Reportedly, donations accounted for more than 80% of the funds that were raised.

A 2016 report by international law firm Baker & McKenzie found that Africa’s infrastructure financing gap has narrowed to $25 billion per year.

In other words, nearly $70 billion is being invested annually. Moreover, it found that private investment had surged 300% between 2010 and 2013, but the report identifies insufficient numbers of ‘bankable’ projects as the biggest hurdle
at this stage.

This is undoubtedly the most challenging obstacle to infrastructure finance on the continent. It is, however, being incrementally addressed as the steadily increasing value of investment demonstrates. The project pipelines are consolidating and the money is already lining up to go in.