It’s 2025. As your driverless Uber takes you to the office for a meeting (you work mostly from home these days), you think back to 2019, and to a time before AI, machine learning and the internet of things (IoT) were used to manage traffic flows. You don’t miss the traffic jams. As you travel, you go over your notes one last time on your mobile device, making sure the augmented reality (AR) effects are in place to support your presentation.

Of course, opening paragraphs like that tend to date horribly. If you’re reading this in 2025 you’re probably chuckling at the naïveté, wondering when we’re going to start talking about hoverboards and space elevators. But now – in 2019 – we’re so close to the reality of smart cities and the Fourth Industrial Revolution (or Industry 4.0), scenes like that don’t seem all that far-fetched.

‘Smart cities are the future, there is no doubt about this,’ says Eckart Zollner, head of group business development at Jasco. ‘The concept of the smart city can be applied in any country across the globe, and many European cities have made great strides in this regard. African cities have many unique challenges, including lack of infrastructure. However, while this can be seen as an issue, it is also an opportunity, as infrastructure can be deployed to support IoT, connected devices and smart cities from the outset, ensuring that solutions can be developed with requirements in mind.’

Yet smart cities are just one aspect of the Industry 4.0-driven future. Businesses are preparing for a time when efficiencies are dramatically improved, costs reduced and profits increased through enabling technology such as high-speed fibre infrastructure, interconnected machines, big data, automation, robotics, cloud computing and collocated data centres – all business buzzwords that are now a reality.

‘Industry 4.0 is no longer a “future trend”,’ PwC writes in a 2016 report. ‘For many industrial companies, it’s now a part of their strategy and research agenda. Companies are combining advanced connectivity and advanced automation, cloud computing, sensors and 3D printing, connected capability, computer-powered processes, intelligent algorithms and IoT services to transform their businesses.’ Even in 2016 – three long years ago – about one-third of the SA industrial companies in PwC’s survey believed their vertical value chains and their product development and engineering functions were already benefiting from an advanced level of digitalisation and integration. Yet to make that future (or that present) a reality, collaboration is required across technology vendors.

‘A smart city is a significant technical undertaking and it is not possible for any single organisation to provide all of the technologies and services required,’ says Steve Apps, CTO of OpenLab, Huawei Enterprise.

‘For a smart city to succeed, the use of open standards and technologies must be employed to ensure full interoperability across all value chains as well as future proofing any implementations.

‘The African smart cities of the future will have hundreds of thousands if not millions of IoT devices and sensors. Standardisation is necessary to reduce challenges with monitoring, cybersecurity protections and over-the-air firmware upgrades,’ he says. ‘Ideally the device management should become more centrally managed and controlled.’ 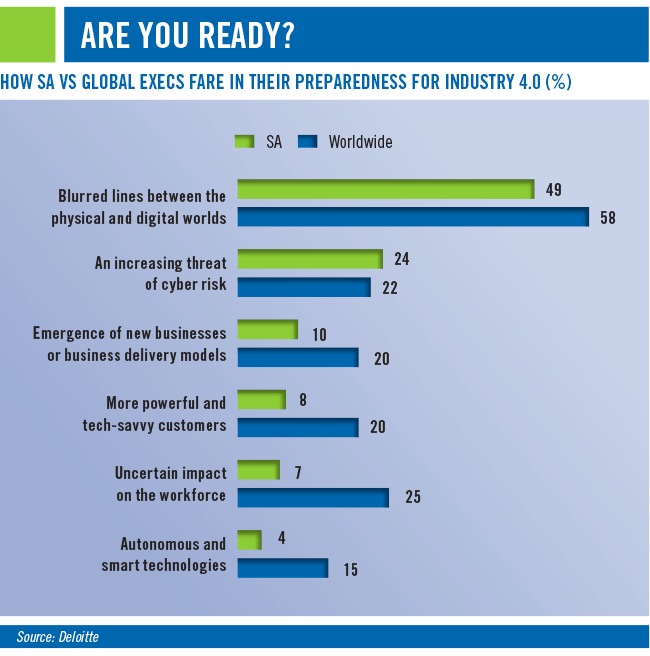 Industry 4.0 is central to the growth of SA’s business environment – as President Cyril Ramaphosa emphasised in his 2019 State of the Nation Address, which was described by some commentators as ‘the most technology-focused speech ever delivered by a South African head of state’. SONA certainly underlined the importance of the country’s ICT sector and of using technology to facilitate economic prosperity.

‘The world we now inhabit is changing at a pace and in a manner that is unprecedented in human history,’ he said. ‘Revolutionary advances in technology are reshaping the way people work and live. They are transforming the way people relate to each other, the way societies function and the way they are governed.’ Ramaphosa then presented a ‘stark choice […] between being overtaken by technological change or harnessing it to serve our developmental aspirations’. He went on to appoint a presidential commission on Industry 4.0 that will aim to ensure SA effectively harnesses those rapid advances in ICT for inclusive growth and social development.

‘[Comprising] eminent persons drawn from different sectors of society, the commission will serve as a national overarching advisory mechanism on digital transformation,’ he said. ‘It will identify and recommend policies, strategies and plans that will position South Africa as a global competitive player within the digital revolution space.’

A week before SONA, Minister of Communications Stella Ndabeni-Abrahams set the tone by writing in an online opinion piece that ‘there is no question that the Fourth Industrial Revolution is upon us’. She points out that all industries are being digitally disrupted, presenting an opportunity for a growing digital economy.

‘By importing Industry 4.0 technologies and combining them with low costs of production factors, emerging countries can leapfrog in the value chain and solve societal issues, including creating decent jobs,’ she writes. ‘Industries with wide product ranges (such as food and beverages), commodity producers (metals, agriculture) and precision-driven (pharmaceuticals and electronic components) are most likely to invest in Industry 4.0, which is crucial for the South African economy.’

Then, shortly after SONA, Minister of Small Business Development Lindiwe Zulu announced that the government was looking at developing the biggest tech hub in Africa, including a coding and programming academy and co-working spaces for start-ups.

‘It also becomes important that small, medium and micro enterprises and co-operatives embrace this radical reshaping of the relationship between technology capabilities and business opportunities,’ Zulu said during a creatives industry engagement session in Johannesburg. ‘Incubators must focus on creating a new generation of South African start-ups that will drive the creation of disruptive technologies in the creatives industry.’

According to Teddy Daka, group CEO at AltX-listed tech firm Etion, Industry 4.0 is driving socio-economic change on a scale and at a pace never seen before. ‘Technological advancements such as IoT and robotic process automation are fundamentally changing the way we live and work, especially the way operations are handled. In this context, leaders in government, business, industry and state-owned companies [SOCs] are concerned about the effect that the rapid move to digitisation will have on their organisations,’ he says.

‘This is particularly true of some major SOCs, which have large legacy systems. The ability to build digital capacity into legacy systems is crucial, as the financial and operational implications of having to replace entire systems are enormous.’ 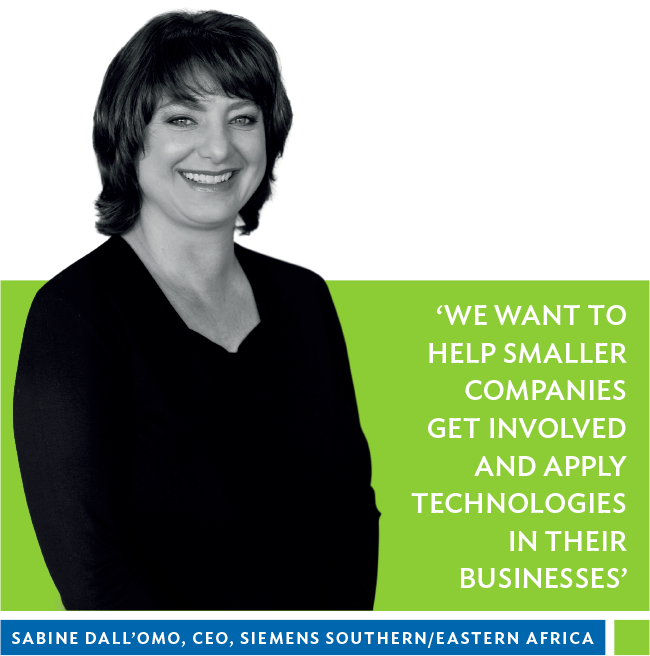 Meanwhile, the private sector continues to invest in the same enabling environment. During a panel discussion in Midrand, hosted by Siemens and CNBC Africa last winter, Siemens Southern and Eastern Africa CEO Sabine Dall’Omo stated the case from a big business point of view. ‘There is no place to hide from connectivity,’ she said. ‘South Africa can’t step aside and not participate. We need to actively participate and shape South African industries to be more competitive in the global market. This revolution is not only for big fishes. We want to help smaller companies get involved and apply technologies in their businesses. This will contribute to a stronger GDP.’

Naturally, the conversation turned to the impact Industry 4.0 will have on the labour market. There’s a clear sense – if not a fear – that the jobs of today will become extinct or irrelevant in the near future, as a completely new set of jobs emerges. For this reason, CSIR research and development strategy manager Daniel Visser told the panel that SA would need to become ‘people-centric’ as it finds local applications for the emerging technologies.

‘The Fourth Industrial Revolution is not an American strategy,’ he said. ‘It is happening because technology is evolving and everybody must be included. One thing robots cannot be is human.’

No. But those robots can certainly help humans – and their businesses – change the way they work, and they can facilitate data-driven production efficiencies … as they are already.

Recent research conducted by Mercer suggests that SA businesses still have some catching up to do. John Roberts, global lead of strategic research at Mercer, notes that 61% of SA CEOs (compared to 44% globally) say they are ‘on a journey but have a long way to go’ to becoming a digital organisation, while only 20% of SA CEOs (32% globally) are very confident that their companies lead disruption rather than being disrupted.

Roberts says Mercer’s research reveals a ‘mixed bag’ of sentiment in the C-suite with regard to the country’s readiness for the new world of work coming our way due to Industry 4.0. As he puts it: ‘You have a C-suite that does not believe their companies are digital organisations; is sceptical of their company’s ability to lead on disruption; [that] believes their company has a long way to go on transformation. And while they score HR highly on their technical expertise, they do not deploy HR strategically to contribute to business transformations or to design enterprise-level change.’

The Fourth Industrial Revolution has arrived. The government is moving to create an enabling environment for it, and some organisations are gearing up to embrace the change. Others are faced with a stark choice between getting onboard with Industry 4.0, or being left behind.