By the time SA’s small businesses are up and running, they have already disentangled masses of red tape and clambered over all the obstacles that SMEs face when setting up shop in this country. Small to medium-sized businesses are regarded as the backbone of any economy, but their success is hampered by bureaucracy and regulatory uncertainty that affect all stages of their business journey.

‘SMEs have been identified as productive drivers of inclusive economic growth and development in South Africa and around the world,’ according to the Banking Association South Africa. ‘While contributing significantly to the economy, SMEs foster diversification through their development of new and unsaturated sectors of the economy. In addition, innovative and technology-based small and medium enterprises can provide a platform for local, regional and international growth.’

Government has therefore reaffirmed its support for the vibrant SME sector in both the 2019 State of the Nation Address (SONA) and the Budget, taking the view that these businesses will stimulate job creation and revive the sluggish economy.

The NDP goes as far as envisaging 90% of all jobs in SA to be created by SMEs by 2030. However, the currently available data on the sector is patchy and fluctuates dramatically. The Small Business Institute (SBI) wants to remedy this by compiling what it calls the county’s first comprehensive baseline study of small businesses, using tax and employment data from SARS and National Treasury. ‘Right now, we are flying in the dark,’ said SBI executive director Bernard Swanepoel in July 2018. ‘It’s no surprise then that we can’t seem to make headway tackling unemployment and inclusive economic recovery and growth if we’re relying on guesswork. No matter how good government’s intentions are, without the facts, policy to help SMEs will be based on ideology or ignorance.’

He added that the institute’s preliminary findings are ‘alarming’. For one, the number of formal SMEs in SA is far lower than expected: just 250 000 compared to the previously estimated range of 1.2 million to 6 million. And though SMEs make up nearly 98.5% of the number of formal firms, they provide only 28% of the jobs. ‘Based on international trends, this should be about 60% to 70%,’ says the SBI.

Then there is the informal SME sector, which, notes Wits Business School professor Boris Urban, conservatively accounts for some 25% of total employment in SA – although ‘there is no conclusive definition of the informal, unregistered, unregulated businesses that typically include service enterprises, production activities and vendoring’. He adds: ‘The informal SME sector is increasingly being conceived of in terms of its entrepreneurial potential where these SMEs provide, on average, half of all economic activity in developing countries. However, when compared to formal enterprises these enterprises are unproductive, serving mainly as a social security net keeping millions of people alive, but disappearing over time.’ 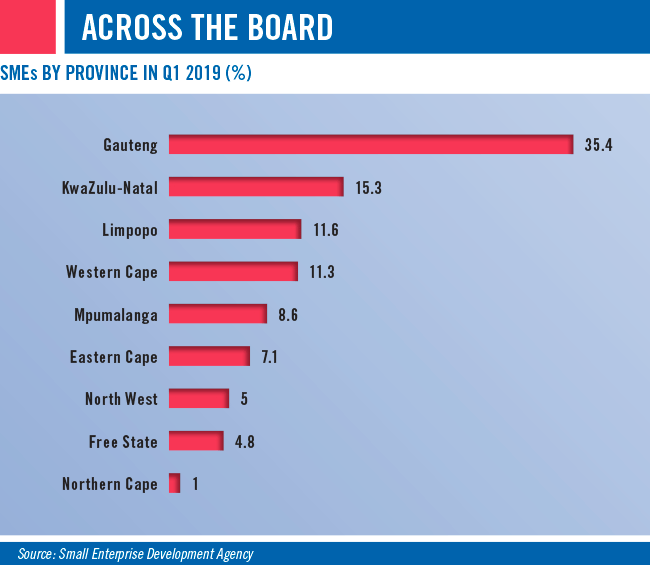 President Cyril Ramaphosa acknowledged this in March when he said: ‘South Africa’s business landscape is characterised by a large number of very small and micro enterprises, a significant proportion of which are informal. Yet the success rate of small and micro businesses is poor.’

There are many reasons for this, including lack of funding and business support, insufficient entrepreneurial know-how and access to market, and not least the country’s shrinking economy. Additionally, there is a thicket of government regulations and the fact that we should do better in the World Bank’s Ease of Doing Business report – where SA has dropped from rank 35 in 2008 to 82 (out of 190 assessed economies) in 2018 and 2019.

The President’s 2019 SONA took up these issues. ‘We are urgently working on a set of priority reforms to improve the ease of doing business by consolidating and streamlining regulatory processes, automating permit and other applications, and reducing the cost of compliance.’

In the Western Cape, a Red Tape Reduction Unit to tackle bottlenecks and improve business processes has reportedly achieved savings and benefits of R1 billion between 2015 and 2019. The unit has, for example, assisted in getting approval for a film shoot in the Tankwa Karoo, which saw the first instalment of a British reality series being filmed in the Western Cape rather than elsewhere. ‘The direct benefit was an injection of R74 million into the provincial economy, with extensive secondary economic benefits for local businesses providing catering, accommodation, fuel and other services, such as maintenance and security,’ said provincial Minister of Economic Opportunities, Beverley Schäfer.

The potential for cutting red tape is immense, according to the Western Cape government. It says that a single factory or plant can require as many as (and possibly more than) 25 approvals, licences and authorisations to operate, which must be obtained from a range of departments, agencies and regulators.

‘It’s a regulatory minefield for small businesses, because there’s just so much uncertainty and duplication. You can never be sure what else may be lurking in the national legislation and municipal by-laws,’ says one entrepreneur, who registered his green-energy firm in March 2018 and needs to start manufacturing to generate an income and secure jobs. ‘We thought we had all the permits and authorisations in place, but now we’ve been informed that we still need an environmental impact assessment,’ he says, adding that so far he’s not been able to ascertain exactly what is required.

The provincial authorities shrug their shoulders, as this is a matter for the national government department, where email responses provide generic information and ask for patience as the process takes up to 18 months. By then the start-up will have run out of money and be lost to the economy.

In October 2018, the Department of Small Business Development (DSBD) announced it was developing a National Red Tape Reduction Strategy, which would ‘provide clarity’ for SMEs and be accompanied by a ‘clear programme of action’. This is what small businesses (such as the green-energy start-up) urgently need.

The DSBD should play a key role as a champion for the participation of such start-ups and SMEs in the public-private growth initiative announced by the Presidency earlier this year, according to Siphethe Dumeko, chief financial officer at Business Partners Limited, a specialist risk-finance firm for formal SMEs in SA and selected sub-Saharan countries. ‘The renewable energy sector, the manufacturing industry and mining stand to benefit if SMEs can be drawn into the planned public-private growth initiatives,’ he says in his ‘economic action wish list’ for SMEs in SA. 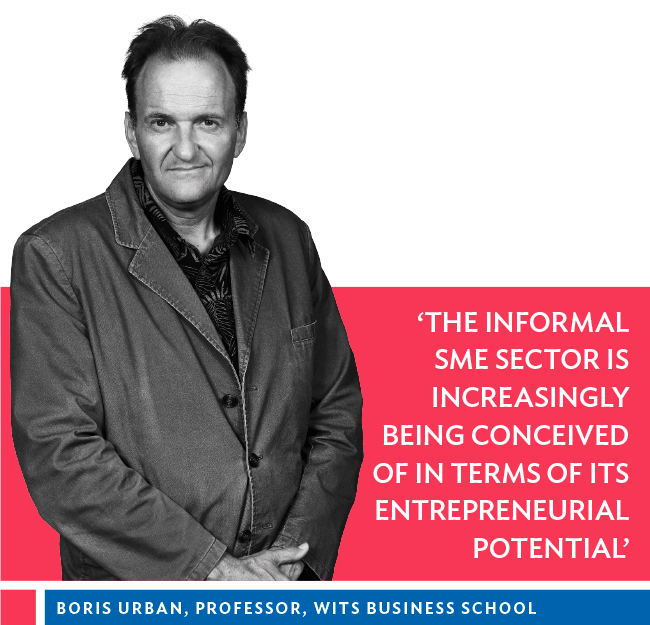 Another point on his list is better co-ordination: ‘In general, the effectiveness of government support for SMEs will increase as co-ordination between the various departments in the economic cluster improves, including the departments of Economic Development, Trade and Industry, and Small Business Development, and their network of agencies such as the Industrial Development Corporation and the Small Enterprise Finance Agency.’

Dumeko adds that the timely payment of invoices also features high on his list. In fact, this is the topic of an SBI campaign in which the institute sent letters to the top 100 JSE companies to find out whether they are paying small businesses within 30 days from invoice (as per government policy).

Just 25% of those that replied reported a specific policy to pay SME suppliers in 30 days or less. And only a handful of companies said they paid within seven to 15 days. The SBI urges government to simplify and standardise invoicing as part of the process, and says late payments are the ‘assassin of small businesses’ and regarded as ‘supply-chain bullying’ in the UK.

A growing number of companies are committing to SME development by investing, supporting and developing them. Fishing company Sea Harvest – which two decades ago set up the West Coast Business Development Centre to provide local services and mentorship for SMEs – has now established the R100 million SA Fisheries Development Fund (together with its majority shareholder, Brimstone Investment).

To start, the fund has prioritised three projects: holistic training and development for SMEs and small-scale fishers; accidental death and disability protection for fishers at sea; and a coaching and mentoring programme.

Another initiative by big business for small business is Business Leadership SA Connect, which was launched in March to link black-owned SMEs with the supply chains of big business. And, of course, there’s the much publicised R1.4 billion SME Fund, created in 2016 by the CEO Initiative to support high-potential SMEs.

Urban makes a valid point when he says that ‘small businesses are not simply just smaller versions of big business; instead they are vulnerable as they are small and [often] new, and consequently need a supportive environment and a mix of responsive policy interventions’.

Government and private companies must keep this in mind and take urgent action. SA simply cannot afford to neglect its SMEs, because when small businesses thrive, the entire economy benefits.