Bayer, Mercedes-Benz, BMW, SAP, Siemens, Volkswagen, DHL, BASF, Bilfinger, Thyssenkrupp and Deutsche Bank. These large corporates, many of them household names in SA, are among the roughly 600 German companies with operations in the country.

Germany ranks second behind China as one of SA’s top trading partners and, according to a 2016 press release by the German Consulate, exports from SA to Germany totalled approximately €6.2 billion, and imports from Germany to SA were estimated at €8.8 billion the same year. The latest 2019 figures on Worldstopexports.com pegs exports from SA to Germany at $7.1 billion, accounting for 7.5% of total SA exports.

According to statistics from the same website, the fastest-growing importers to SA from 2017 to 2018 were the UK (up 37.5%), Germany (up 22.4%) and Mozambique (up 12.6%). It is fair to say a symbiotic bilateral trade relationship exists between the two nations. As for FDI, the South African Reserve Bank reported R94 billion worth of inward FDI from Germany into SA in 2017, which represented almost 5% of total FDI, notes Sanisha Packirisamy, an economist at Momentum Invest. ‘This ranked as the fifth-largest investment by country into SA, and compares to R519 billion from the United Kingdom – 27% of total, which is the largest investor by country, followed by the Netherlands (R346 billion), Belgium (R286 billion) and the United States (R129 billion).’

Tobias Bartz, CEO of German logistics company Rhenus Air & Ocean, which recently acquired SA company World Net Logistics (WNL), says the acquisition marks an important step in establishing its presence in SA and the rest of the continent. ‘Africa, especially South Africa, offers huge growth potential,’ he says. ‘We see the South African acquisition as a gateway to extending our service offering into the rest of Africa from a solid base with a relatively stable political environment, and a well-developed infrastructure.’ WNL operates well within SA and Rhenus is in a position to offer not only global expertise and connections but also to invest in infrastructure. The company already has plans to invest in warehouses in strategic locations, including KwaZulu-Natal, as a start, and then branch out from there. ‘When businesses are acquired, they are acquired generally with a view to [grow these companies] and, as with any acquisition, there is the opportunity for both the acquiring and the acquired businesses to benefit from each other,’ says Bartz.

However, the stable political environment Bartz refers to was, in June 2018, called into question by SA’s top trading partners, including Germany. A collective of Western diplomats from the US, UK, Germany, the Netherlands and Switzerland, together accounting for 57% of SA’s FDI as at the end of 2017, sent President Cyril Ramaphosa a memorandum questioning changes to policies for certain industries, in particular mining and intellectual property rights. The memorandum was met with raised eyebrows by the government, saying it was a ‘departure from diplomatic practice’. It seems not to have swayed Germany’s gaze from opportunities in SA.

In July 2019, SA ambassador Phumelele Sizani met with German MP Thomas Oppermann, VP of the Germany’s national parliament, to discuss further strengthening relations between the two countries. And speaking in February this year at the Fruit Logistica Trade Fair in Berlin, one of the world’s leading international trade fairs for fresh fruit and vegetable industries, Sizani mentioned the EU’s plans for a free-trade agreement with SA and other African nations.

According to Sizani, Germany has emphasised the necessity for partnerships between SA and Germany that could prove lucrative for corporate interests in both countries. It is one of many reasons the EU nation has been investing resources in skills development in SA, and supporting the growth of company-to-company partnerships between the two countries, he explains. ‘We have created infrastructure that allows the embassy to have access to key German industry associations. We speak with them on a regular basis [in order to] advise [SA] companies on possible problems and regulations,’ he says.

Accompanying Sizani at the trade fair was a delegation of 22 SA companies and three industry associations intent on positioning the nation as the fruit and vegetable exporter of choice. Luke Govender, director of export promotion at the Department of Trade and Investment (dti), says the mission was solidified by a public-private partnership between the dti, the Fresh Produce Exporter’s Forum, Fruit South Africa, the Perishable Products Exports Control Board, and the Agricultural Research Council. ‘Our value proposition is essentially the opportunity of counter seasonality and the sectoral comparative advantages that we have as a country. We will also [leverage] the opportunities presented in the Southern African Development Community Economic Partnership Agreement, whereby improved market access into the European Union has been granted for more than 30 products, particularly agricultural products,’ says Govender. In 2016, agricultural imports by Germany from SA stood at 2% of total imports, whereas imported finished products accounted for 85% of total imports.

In November 2019, another delegation is set to embark for Berlin to woo investors at the Association for Supply Chain Management, Procurement and Logistics (BME) Symposium, in what the dti calls an outward selling mission. ‘The objective of this mission is to facilitate access for South African value-added products and services into the global value chains of German and European multinationals,’ notes the dti. The targeted sectors for this mission include metals, electronics, ICT and logistics services. ‘The BME Association indicated they are open to the idea of establishing a relationship with South Africa in order to integrate industrial/ semi-finished products into the supply chain of German companies,’ according to the dti.

Germany has become synonymous with quality vehicle production, and many SA towns rely on work opportunities presented by vehicle plants built with German money. The Volkswagen Group South Africa (VWSA) plant is situated in Uitenhage, an industrial town in the Eastern Cape. The group is the largest German investment in SA, according to the VWSA website, and about half of the plant’s 520 963 m² consists of production facilities.

Online business publication SA Market Insights notes that many SA exports heading to Germany and the UK are vehicles manufactured in SA on behalf of German manufacturers, such as Mercedes-Benz, Volkswagen and BMW. ‘South Africa builds these vehicles, in particular right-hand drive cars, and then exports them back to Germany, or to the UK, where this type of vehicle is used.’

It is one of the key factors in SA’s exports to the EU being dominated by Germany and the UK. Likewise, SA’s import trade with the EU is dominated by Germany, accounting for roughly a third of SA’s imports from this region. Again, a large chunk comprises vehicle parts for SA plants that are used to build German vehicles. 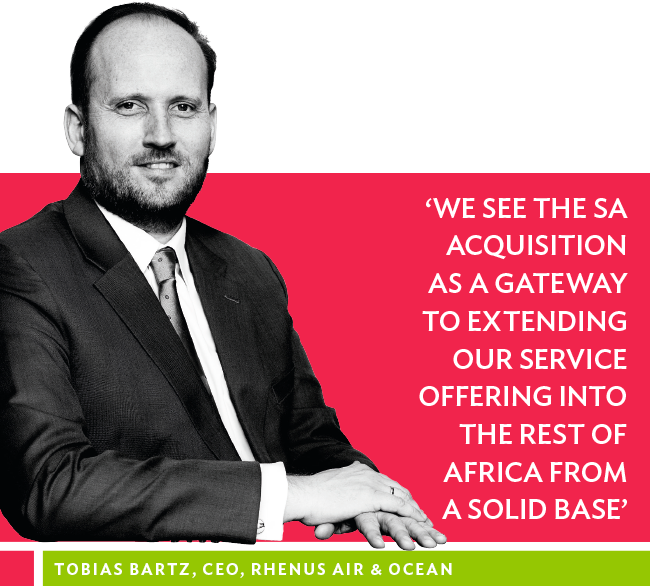 Mercedes-Benz announced a €600 million investment in June 2018 to expand its East London plant. Markus Schäfer, member of the divisional board of Mercedes-Benz Cars: production and supply chain, says that ‘the decision to have the new generation of the C-Class built in East London reaffirms the plant and Mercedes-Benz South Africa. The investment is also a sign of our commitment to South Africa and efforts to revive economic growth as well as the socio-economic development of the East London region’. Overall the new buildings comprise an area of about 100 000 m2, an addition to two-thirds of the already existing buildings for the passenger-vehicle production.

There has, however, been a marked downturn in production in the German automotive sector, according to EY’s 2019 Attractiveness Survey Europe report. Production decreased by 7% on a seasonally adjusted basis in the second half of 2018 compared to the first half, which was caused by ‘a perfect storm’ of concerns around Brexit, US tariffs, slowing demand from China, and tougher environmental standards. Volkswagen notes that in August 2018 it delivered 3.8% fewer vehicles to clients than in August 2017. In the same survey, investors ranked Berlin seventh globally and second in Europe when asked which city has the best chance of producing the next technology giant.

SA exports to Germany continued to be primarily vehicle-driven through 2018, with vehicles accounting for 52% of exports, according to the UN’s COMTRADE database on international trade. Pearls, precious stones, metals and coins made up 13% of exports; machinery, nuclear reactors and boilers 12%; and ores, slag and ash for 6%, among others.

Packirisamy says there is significant potential for stronger EU/Africa relations. In September 2018, European commission chief Jean-Claude Juncker extended a promise for an EU-Africa trade pact. Similarly, following the Brexit referendum, Britain’s Secretary of State for International Trade visited Uganda, Ethiopia, Mozambique and SA to discuss the UK’s trade policy for Africa and expressed a willingness to build on the relationship with the latter. ‘SA remains an attractive investment destination for German firms given deep and liquid capital markets, developed financial markets and good legal, communications and transport infrastructure,’ says Packirisamy. ‘Nevertheless, policy uncertainty and elevated unit labour costs, which have failed to match productivity, raise the cost of doing business in SA. With SA’s progress slipping on the World Bank Ease of Doing Business Index – even relative to the progress of other African nations – SA authorities should aim to create policy certainty in highly contested areas, such as land reform and property rights, to attract and maintain inward investment.’

The German consulate in a media release notes that apart from the traditional economic sectors SA is renowned for, other industries – such as the energy and infrastructure sector, the information and telecoms industry, clean tech, as well as the healthcare market – are considered attractive future markets for German companies.