You spend far too much of your time sitting in traffic. But, if your average round trip commute takes 74 minutes – and if you have to deal with anything like Cape Town’s Nelson Mandela Boulevard, Johannesburg’s William Nicol Drive or Pretoria’s Ben Schoeman Highway, it probably does – then there’s good news for you. According to a new study conducted by Juniper Research and sponsored by Intel, there’s a tech phenomenon that has the potential to ‘give back’ 59.5 hours per year per commuter. That phenomenon is smart cities.

The concept of the smart city is not new. You’ll already be familiar with the idea of the connected, data-driven cities of the future, which use internet of things technologies such as connected sensors, meters and lights to collect and analyse information, in order to improve public infra-struc-ture and services. That Juniper study, however, is among the first to tangibly measure those potential benefits, exploring how intelligent traffic systems (19.4 hours), open data (31 hours), cashless payments (1.2 hours) and safer roads (7.8 hours) can reduce your daily travel time.

The backbone of any smart city is its broadband internet connectivity. Underpinning all of that is fibre – to the home (FTTH), to the business (FTTB) or anywhere it’s needed (FTTX). Speaking at the FTTX Council Africa Conference in Cape Town last October, Minister of Telecommunications and Postal Services Siyabonga Cwele said: ‘The information society and knowledge economy that underpin the Fourth Industrial Revolution require strong and resilient communications network infrastructure epitomised by FTTH/B or FTTX. It is core to smart cities and big data transmission.’

‘Smart cities definitely need a core fibre infrastructure and as much direct FTTH connections as possible,’ says Andre Fourie, executive chairman of Poynting. ‘We need to ensure all people get internet access. Unless poorer citizens are given access they will be completely marginalised with disastrous consequences socially and in terms of economic growth in the long term.’

Over the course of the past four years alone, SA has seen extensive FTTX roll-out, driven by exactly that demand. 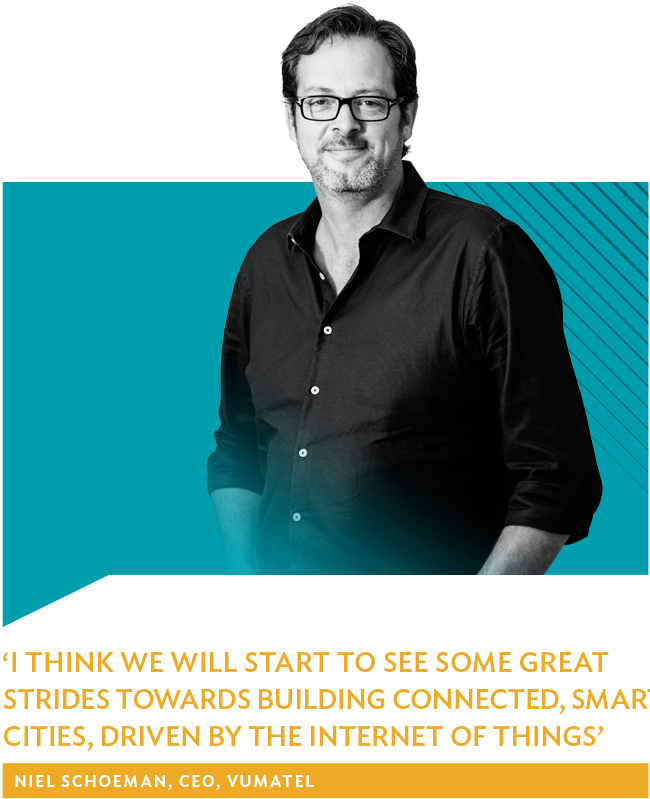 High-speed fibre internet provider Vumatel was one of the first companies to deploy fibre in SA, and CEO Niel Schoeman acknowledges that the local landscape has changed ‘quite significantly’ since Vumatel first started laying down infrastructure. ‘In 2014, when Vumatel pioneered FTTH in South Africa, we were the only players in the market,’ he says. ‘Since then a great number of competitors have entered the market. Although this makes our job a bit harder, we are glad to have ignited an industry and driven the FTTH market forward.’

Rival telco Vox has experienced similar growth. Speaking at the company’s business partner conference in Pretoria in February, CEO Jacques du Toit said that the company’s R550 million investment in fibre-optic infrastructure in 2017 saw Vox increasing its coverage area from 3 700 km2 to 18 000 km2. ‘We are starting to see the results of a strategy that was put in place two years ago,’ said Du Toit. ‘Last year, we connected 14 000 FTTH customers and passed 26 000 homes. We also connected 8 000 FTTB customers and passed 11 000 businesses. In 2018, we are hoping to continue to invest in infrastructure, which will spark the development of FTTH in more remote areas where we have deployed FTTB solutions.’

Meanwhile, Liquid Telecom has seen similar expansion, again with more in the pipeline. Chief business development officer Willem Marais told MyBroadband that Liquid Telecom now has ‘over 16 000 km of linear network route in South Africa and a total of over 50 000 km across all 15 markets we serve’.

As the FTTX market has matured, and as more players have come onto the scene, prices have declined quite dramatically. A report by tech researchers BMIT found that, after starting at around R40 000 per month in some cases for uncapped gigabit-per-second fibre connections, those same connections now cost less than R3 000 per month.

‘Entry-level prices have declined to the extent that they are now affordable to most broadband households,’ the report stated. ‘The biggest shift has been at the upper level of the market, both for high-speed capped services and for typical 20 Mbps uncapped services – where average prices have fallen by a third. Little wonder then that customers have rushed to adopt fibre broadband services. The problem is not with the demand, but with the ability to service the demand quickly enough.’

Speaking to Schoeman, there’s the sense that this rapid growth has caught even the providers by surprise. ‘One challenge we face is the massive and unexpected growth of the company,’ he says.

‘When we piloted FTTH in Parkhurst in 2014, we took a gamble. We decided that if the pilot worked, that would be great. If it didn’t work, we would have hoped to at least ignite an industry.’

So where does this place SA – and Africa in general – in the global race to bring its smart cities online? A report by US research group the Brookings Institution states: ‘African countries are presently in the early stages of their urbanisation process. Though Africa was the least urbanised region in the world in 2015 – only 40% of sub-Saharan Africa’s population lived in cities – it is now the second-fastest urbanising region in the world (behind Asia). Population experts predict that by 2020, Africa will be on top. 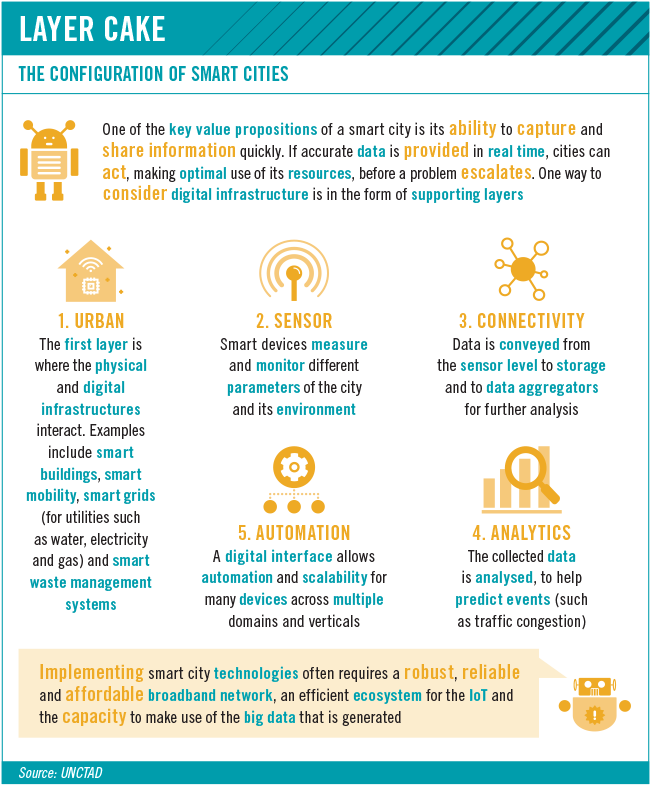 ‘Given this rapid growth, now is the time for African policy-makers to incorporate smart cities into their urbanisation strategies.’

Edwin Diender, vice-president: government and public utility sector at telecoms giant Huawei, agrees. In a statement published on MyBroadband in March, Diender said that, ‘when it comes to identifying needs and resolving to establish smart initiatives, South Africa is on par with the rest of the world – with many initiatives already being addressed in Cape Town, Johannesburg, Pretoria, Durban and Port Elizabeth.’

Diender added that the country is in a unique position when it comes to establishing smart solutions, because local government is very supportive of these initiatives. ‘Europe is almost over-regulated, making it very difficult to proceed swiftly, compared to South Africa,’ he said. ‘In fact, if Amsterdam and Johannesburg were to compete in implementing a particular smart solution, I believe Johannesburg could easily win the race.’

Schoeman has a similar take on it. ‘The major cities, which are already largely connected by fibre – like Johannesburg and Cape Town – are not far from becoming the smart cities of South Africa,’ he says. ‘I think we will start to see some great strides towards building connected, smart cities, driven by the internet of things over the next 18 months, now that fibre has laid the foundation on which smart cities can be built.’

He adds that the FTTH industry, having already connected homes across all of the major centres, is now looking further afield. ‘Vumatel recently worked to develop a scalable, fundable model to connect townships to affordable abundant fibre broadband in an effort to bridge the gap being exacerbated by the digital divide.’

‘Vumatel will pilot this model in the township of Alexandra. If the pilot proves to be successful, we will be able to connect an additional 10 million people by expanding our existing network.’

Yet the provision of fibre, and other services to allow people access to the internet, is just the beginning of the SA smart city revolution. For many experts it’s all about the massive amounts of data that are being generated and how best to utilise it.

‘Big data plays a role with first applications in integrated traffic control and later automated vehicles,’ says Fourie. ‘Similarly energy grid control, and usage and load management requires massive distributed data to be effective. These are but the tip of the iceberg since numerous commercial usage will pop up in areas of retail logistics, remote metering and many others.’

This increase in awareness can offer multiple benefits to businesses. Having been surprised by the massive potential of this market, it’s unlikely companies will go into this next phase of SA’s development with the brakes on.