As a female executive who credits mentorship for supporting her on a career that has taken her from engineering to finance and now to legal services, Lesego Chauke-Motshwane, business operations executive at law firm Cliffe Dekker Hofmeyr (CDH), says: ‘It does take conscious sponsorship, mentorship and coaching to support progression and to get ahead in business, even more so for female professionals. I now mentor young women myself and have realised over the past three or four years that it’s not about technical competence – because they have the technical skills – but more about individualised coaching and career mentorship; guiding them on how to take the next step and overcome challenges.

‘There is the sentiment that we should be beyond focusing on gender equality by now but unfortunately we can’t, because as a nation we have made the necessary strides but more is needed,’ she says. Therefore employment equity needs to remain on the agenda until all companies – from small to medium, and large to multinational enterprises – meet their internal and statutory targets in female representation at all levels.

While this sounds promising, the firm’s COO Advaita Naidoo puts the findings into context. ‘In most instances, there is a relatively weak internal pipeline of senior-level female talent. This could be because the industry has been traditionally male-dominated, for example petrochem, engineering, automotive. But, more likely, it’s a reflection of the global trend data, which shows that at senior-management levels, there is a 30:70 ratio of women to men in most industries and functions. Consequently, companies are compelled to source female leaders externally.’ 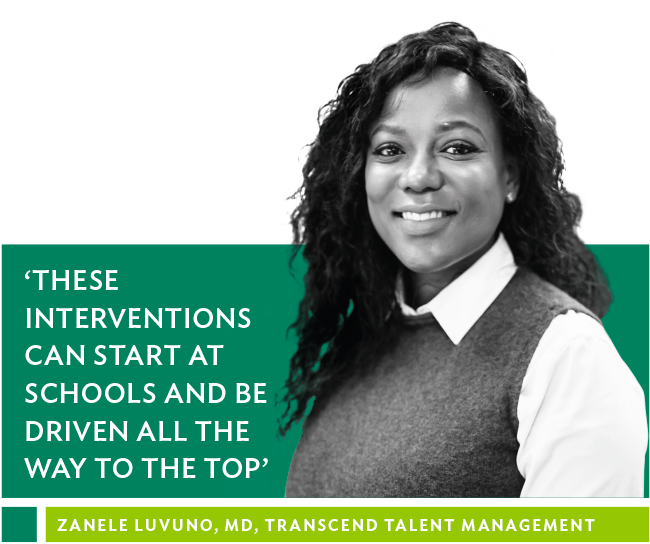 While gender inequality is a systemic issue that is rooted in our patriarchal society, companies can put internal structures and processes in place to create an environment that is conducive to female leadership and the development of a female talent pipeline. Take for instance CDH, which is among SA’s top five law firms and employs 600 to 650 staff members, including permanent as well as fixed-term contracted employees. ‘If we look at females from a numbers perspective, we employ over 400 across the various levels, all the way from top management, operations and support,’ says Chauke-Motshwane. ‘The overall female representation at CDH is 64%, so we are making strides.’

She says the firm is committed to learning from other companies that have invested notably in diversity and female representation, citing AB InBev (that owns SA Breweries) and tech giants Google and Alibaba. Although gender inequality is rife at senior levels in most corporates, with fewer than 25% of exco members in the JSE Top 40 being women, SA’s female professionals have experienced some gains, according to Naidoo. ‘There was a 5% increase in female representation at senior executive level over a three-year period from 2015 to 2018. And many of the companies in this list have women as the CEOs of the local businesses, for example Zyda Rylands at Woolworths and Soraya Benchikh at BAT Southern Africa,’ she says. ‘Outside of the JSE Top 40, female CEOs can be found at Santam, PwC, African Bank, Sygnia – which are not small businesses by any stretch of the imagination – and several more. The change may be incremental but the tide is shifting.’

More and more companies are recognising that women executives can boost their profitability and innovation revenue. According to UN Women, firms with three or more females in senior-management functions score higher in all dimensions of organisational performance. The IMF explains in a blog why the financial performance of firms improves with more gender-equal corporate boards. ‘Our analysis springs from the observation – supported by considerable microeconomic evidence – that women and men bring different skills and perspectives to the workplace, including different attitudes to risk and collaboration.’ 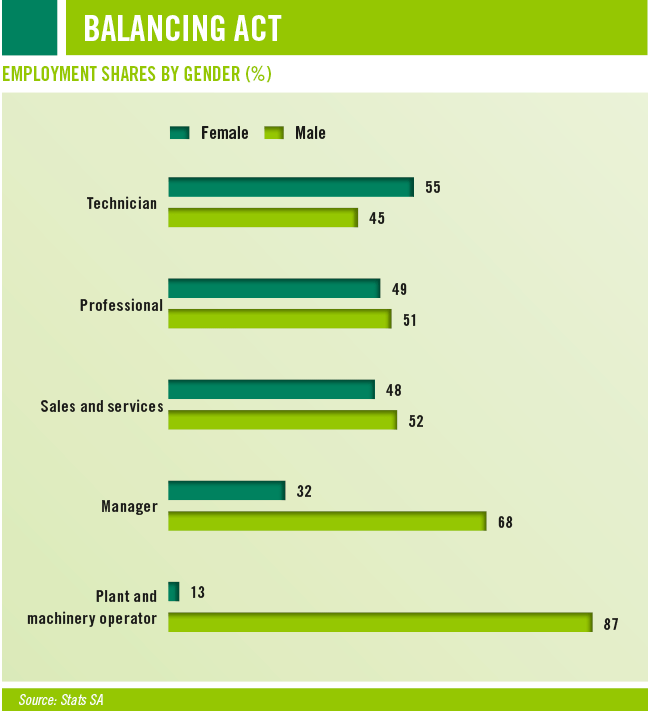 To address the fact that managers often hire people who are similar to them, companies should consider the existing diversity profile within their organisation, says Renate Scherrer, MD of JvR Consulting Psychologists. ‘Companies need to understand or celebrate the unique characteristics that black and/or female candidates bring.’

She adds that ‘a common pitfall is trying to recreate the more traditional or commonly accepted behaviours, whether effective or not. One needs to challenge the assumptions and be open to different perspectives and ideas’. This indicates an added complexity in an SA context, where issues of gender are intrinsically linked to issues of race – with black African women accounting for 80% of the female population and disproportionately burdened by unemployment, gender-based violence and poverty.

A participant in Bain & Company’s 2017 survey on gender disparity in SA made this clear when responding: ‘I am a black woman. I am not a woman on some days and black on others; I am both at the same time. For me, promoting gender equality in the workplace is irrelevant if it doesn’t also promote racial equality at the same time.’

Zanele Luvuno, MD at Transcend Talent Management, echoes this sentiment. ‘How can we ever achieve meaningful transformation within a reasonable time frame if we don’t in some way fast-track black and female candidates?’ she says. ‘Just look where we are in 2019 and how untransformed South Africa’s corporate society still is. That said, there is nothing worse than moving someone into a role they are not ready for. [It’s] not good for the business and definitely not good for the morale and career of the individual concerned.’

However, companies frequently can’t find the desired skills for black female talent in-house, even if the potential exists. ‘When looking at transformation internally, it’s about directing resources such as implementing skills development and learning programmes to build the skills base and achieve sustainable growth through internal development and promotion,’ says Scherrer.

Therefore it’s crucial to measure and benchmark the talent pool to determine the gaps of in-house talent before even considering external recruitment. ‘In our world we recommend our clients use our artificial intelligence tool for this,’ says Luvuno. ‘It has a leading-edge pre-assessment capability that identifies potential through behavioural and neurosciences.

This allows us to fish in ponds where no one else would look, and find individuals with the highest likely predictors of performance.’ Once an individual has been identified, she adds, ‘one can support the individual with the correct interventions for their growth. These interventions can start at schools and be driven all the way to the top’.

Organisations also need to be aware of invisible barriers that hamper female talent from reaching the top. ‘Women are judged more harshly at work than their male counterparts, particularly when it comes to making mistakes,’ writes Donna Rachelson, author of Play to Win: What Women can Learn from Men in Business. ‘Women who lead large public and private companies face greater scrutiny because of their gender. They’re also more likely to be judged according to their voice and personalities.’

She quotes a study that found women’s perceived competency dropped by 35% when they were judged as being forceful or assertive – qualities for which male CEOs are often lauded. ‘So women don’t make mistakes more often than men but when they do, the consequences are harsher; they fall harder than their male counterparts,’ says Rachelson.

The bottom line is that equal gender representation – particularly of black women at executive level – is not only good for innovation and profitability but it also gives companies an additional competitive edge. A growing number of companies expect their service providers to be transformed and are asking for their diversity credentials before doing business with them. This is one more reason why SA’s corporates need to invest in their female talent pipeline and change management if they are serious about achieving gender equality.