When Microsoft renovated its Amsterdam offices in 2017, it did exactly what you’d expect it to. For six months, it used smart sensors to monitor how desks, meeting rooms and common areas were being used and gauge the noise and air quality levels. It then plugged that data into a cloud-based app, which analysed its findings and – based on what it had gathered – suggested options for the best possible workspace, with the most satisfied staff, highest productivity, lowest energy consumption and best all-round happiness.

The building – called the Outlook, of course – has spaces designed and arranged to provide occupants with an optimal working experience. ‘We have identified two different people flows in our building: the employee experience and the visitor experience,’ says Chris Nouveau, Microsoft’s digital adviser. ‘We want to use smart technology to facilitate both – from the moment people set off to come here and park, to receiving our guests, being able to work comfortably and host a meeting, through to their departure.’

Yet there’s another side to how Microsoft optimised the space inside the Outlook. By using the building data it gathered before the renovation, the company was able to reduce the amount of space it required by 25% – allowing it to rent out one-and-a-half newly available floors. Speaking to Raconteur, Philip Ross, chief executive at workplace consultancy UnWork, outlined the potential these kinds of insights have to reshape a company’s organisation chart. ‘We tend to simply put departments near each other,’ he says. ‘Suddenly this data can look at who’s emailing whom within the organisation.’

Based on that, the smart building’s control centre will be able to suggest when colleagues who contact each other frequently might benefit from sitting together. ‘People are working in teams as opposed to the old slow process of everyone sitting in their departments and coming to endless meetings,’ says Ross. However, it goes even further than that: by using smart-building data, each individual’s specific work day can be tailored to provide the optimal workspace, colleague interactions and environmental conditions for whatever’s on the agenda. As Ross tells Raconteur, it’s a bit like having your day at the office lined up like your Netflix menu. ‘When you watch a movie, it says, “You watched this movie; you might enjoy these three movies”. That will be no different to the smart building.’ 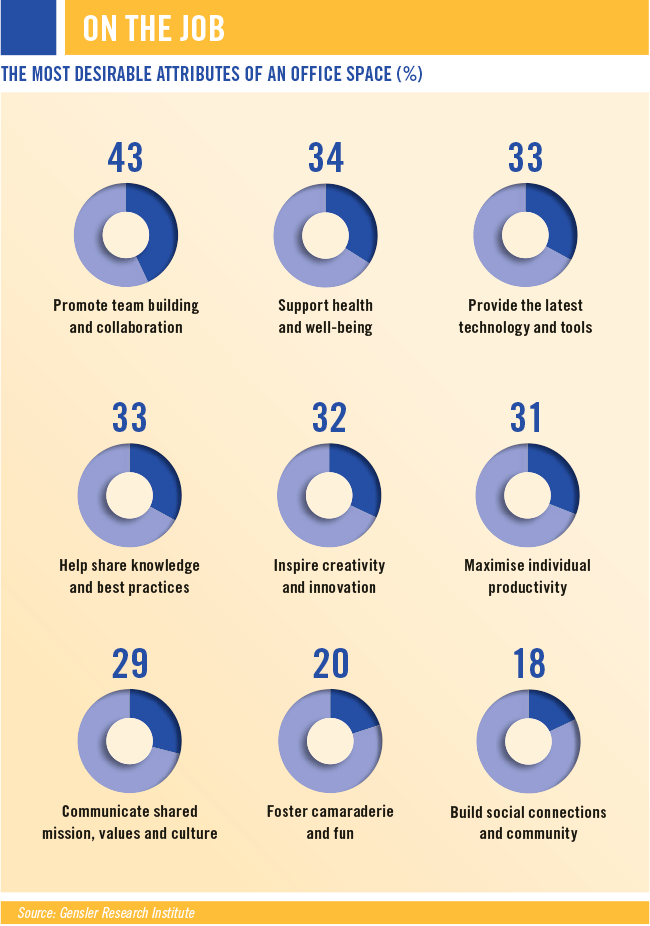 A research paper published by UnWork and real estate advisory firm JLL went into even greater detail about how future software and data will help companies optimise their resources and their office space. Some of that data will be gathered by wearables and connected devices. ‘Smart systems already employed by retailers to capture footfall data and increase conversion rates are now being deployed in workplaces,’ the paper states. ‘Similar technologies are dropping in price and finding their way into workplaces to measure occupancy.’

In 2015, Steelcase launched a version of its Gesture chair that not only monitors usage but also the heart rate, sitting habits and stress levels of users. Hitachi has recently unveiled a wearable badge, which, claims the company, can measure the happiness of an employee by looking at their physical activity. Fitness trackers such as Fitbit wristbands – increasingly common in employees’ personal lives – are finding a new lease of life in offices. According to Gartner, 10 000 companies offered employees fitness trackers in 2014.

Emma Luyt, MD of JLL’s wholly owned full-service design, fit-out and refurbishment specialist Tétris South Africa, believes that data – combined with the human expertise of an experienced workplace strategist – produces the best results when it comes to optimising office space. ‘Spending time with the client to understand their business and the full functionality required, is important for designing a fit-for-purpose space,’ she says. ‘Sensor technology can make a building or office space smarter. Sensors monitor the utilisation of desk space, optimise conference room usage and monitor personnel comfort levels through heat, humidity, air quality and noise levels. When analysed, this data is valuable in ensuring ongoing workspace optimisation.’

Cost savings are an important part of that optimisation. SA build fit-out specialist Trend Group found this in a recent project where a client asked them to streamline its 1 800 m2 office space. In a statement released after the project’s completion, senior interior architect Marike Kleu says: ‘When we analysed the workflow and how the company actually conducted its work, we soon realised there were many factors that would ultimately impact on the workspace design.’

One factor was that many of the employees worked remotely, and weren’t in the office for long periods of time. ‘The obvious implication is that the company did not need such a large number of desks as it had envisaged, which meant that the overall office-space requirement could be reduced substantially without affecting productivity. This represents a major cost-saving, as office space is one of the costliest overheads for any company,’ says Kleu. 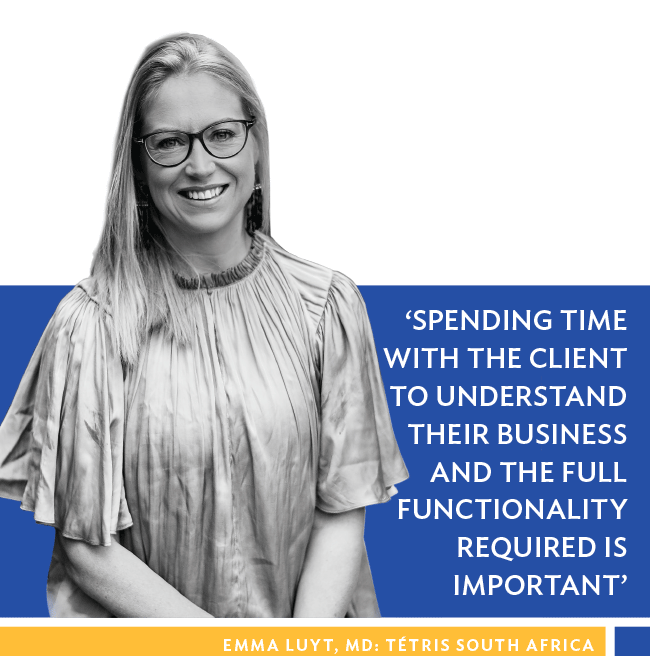 SmartSpace Software, a UK-based workspace solutions company, had a similar experience on one of its recent projects. ‘Space management and space optimisation is about helping companies get more from their corporate real estate,’ CEO Frank Beechinor says in an interview with Proactive, adding that while corporate real estate (such as buildings and office furniture) used to be seen as fixed costs, SmartSpace’s software now allows for some ‘flex’ room. ‘Some clients have been able to get the ratio up to 1.4 people per desk,’ says Beechinor, citing Swiss bank UBS as an example. ‘They wanted to hot-desk and, as a result of using our app, have been able to accommodate 6 000 employees with 4 000 desk units.’

That’s 6 000 backsides on 4 000 seats… The maths doesn’t add up unless you turn your workspace into a coworking one. ‘Coworking isn’t a new phenomenon,’ US research company Gensler notes in its US Workplace Survey 2019. ‘At its inception, these spaces were designed for individuals or small groups that needed a place to work. In recent years, that dynamic has started to shift. There is a fast-rising contingent of “enterprise” users of coworking spaces, or people who utilise [these spaces] out of an agreement with their employer and a coworking company.’

In other words, the notion of ‘your’ desk in ‘your’ office, or ‘your’ spot by the window doesn’t exist in this new model. As Gensler’s survey found, 14% of respondents (more than 8 000 US office workers, all of whom work for companies of 100 people or more) use co-working space as part of their average work week. Most are in managerial positions or above. So much for the idea of the boss in the corner office.

The Trend Group’s way of working reveals how data, software and on-the-floor research are upending traditional workplace models. ‘The project lead will brief us on the basic scope,’ says Kleu. ‘From there, we sit with the client in order to understand the precise requirements. It is important to understand the company structure, as opposed to just compiling a list of items and then compiling a space plan.’

That information forms the basis of a concept shell design, then a space plan, and – finally – a 3D visual model that is presented to the client. ‘We then embark on an interactive process in terms of the design focus and finalising it,’ says Kleu. ‘Only once that is done are we able to cost it, which obviously has to take into account the client’s budget from the get-go. We will not opt for an overly complex design if we know we have a limited budget. Thereafter, work drawings are produced, and the project is assigned to a project manager to oversee the full [job] implementation.’

An optimised workplace is key to driving productivity and – importantly – keeping the humans who work there happy and healthy. ‘An increased focus on talent and productivity has contributed to a growing emphasis on employee experience,’ according to Luyt. ‘A workplace that puts human experience at its core can increase employee engagement, empowerment and fulfilment; strengthen the link to professional happiness and satisfaction; and have a positive impact on productivity and quality of life.’

Success, then, lies in understanding the data and being open to new solutions in workplace layouts and interior architecture. ‘A key aim is to make our clients aware that a conventional, closed-off office plan is not necessarily the best option,’ says Kleu. ‘As designers, we are fairly in tune with internal trends and developments, but convincing our clients to embrace such innovation is a challenge.’ Not, one imagines, for much longer.