So far this year, 16 000 JSE diesel hedge futures and options contracts have been traded, with an estimated value of R400 million. This number is up by 38% as compared to 2015, with 78 million litres traded. The diesel hedge gives investors the opportunity to hedge against movements in the local pump price of diesel. It’s particularly suited to investors and business owners in the mining, agriculture, and transport and logistics industries.

‘It gives you the ability to lock in a price, which is driven by two volatile components – the oil price and the exchange rate. As a buyer or consumer of diesel, by locking into a contract now, you are able to buy diesel at a cheaper price if the exchange rate devalues and the oil markets go up,’ says Chris Sturgess, the JSE’s Director of Commodity Derivatives.

Conversely, importers and refiners who may be concerned that the diesel price is going to fall could lock in the price at a higher level.

The contracts reduce risk by providing a hedge through following the price of European gasoil, as traded on the New York Mercantile Exchange. The contracts are traded in rand per litre, with each one representing 5 000 litres of diesel – although there is room to expand this further – and provide investors with a hedge against movements of the price of diesel, which is refined in Europe. 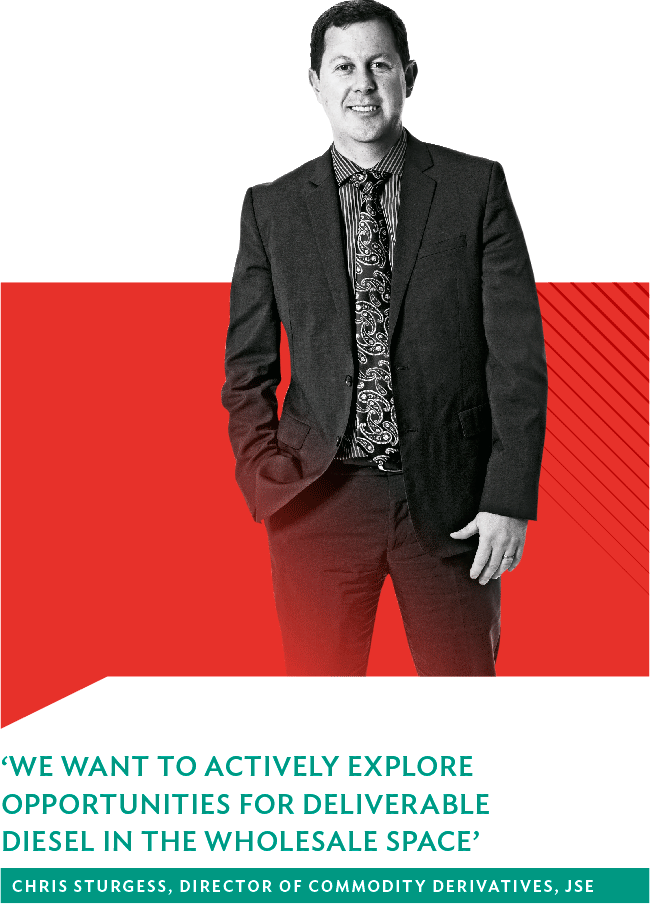 By locking in their margins, regardless of the movements of the diesel price, Sturgess believes businesses could benefit in relation to long-term sustainability. Initially, the diesel hedge appealed to financial players but Sturgess says the JSE is seeing an uptake from more transport and logistics companies. He suggests that anyone using 10 000 litres or more of diesel per month would be attracted to this derivative.

The JSE is hoping to take its diesel hedge facility to the next level by exploring the possibility of a deliverable diesel contract. ‘This will solve some of the risk in matching the settlement price because we are now able to pick up physical delivery of diesel on the grid. We want to actively explore opportunities for deliverable diesel in the wholesale space,’ he says.

Sturgess notes that the JSE is considering contracts of 40 000 litres – the amount of diesel carried by the average fuel tanker. The diesel is available at 26 delivery points around SA and the final settlement price would be the deliverable diesel. ‘What we are doing is tapping into the existing delivery network and making it more visible,’ he says, adding that they had received interest in the new offering and were holding workshops about it.

The current products are typically 12 months out but are driven by demand. ‘We’re excited to be working on the deliverable contract. It’s a great combination taken together with our standardised 5 000 litre diesel hedge contract,’ he says.

‘Hopefully the two will complement each other, so that we are able to increase the growth of our hedging products.’

Investors have the option of buying as many contracts as they need as the JSE contract taps into the deep and liquid international markets. With so much flux in global markets, the diesel hedge is seen as a comforting option.

‘The rand has a huge impact on our local energy prices. With most commodities linked to the dollar, we see volatility in the exchange rate that filters through to commodity prices. Contracts like this at least offer some peace of mind,’ says Sturgess.