One of the greatest returns on investment, yielding some 247% in 45 years, is the one the JSE has made in financial literacy through the JSE Investment Challenge. Conceptualised to introduce SA Grade 8–12 school learners to the world of finance, the Challenge – which today includes a university category – offers a simulated experience for participants to make stock exchange investments and produce returns.

The Schools Challenge and University Challenge both take place from March to September annually and comprise teams of up to four learners for the former, and at least two students for the latter. Each team is provided with a virtual R1 million to trade JSE-listed shares in one of three risk portfolio categories: Speculator (high), Equity Growth (moderate) or Income (low). University teams are restricted to the Speculator category.

‘These different portfolios allow participants to select their appropriate wealth-management strategy, testing their investment skills against their peers,’ says Idris Seedat, Head of Trans–formation and CSI at the JSE. ‘It’s a real-world, albeit virtual, lesson in how money grows.’ 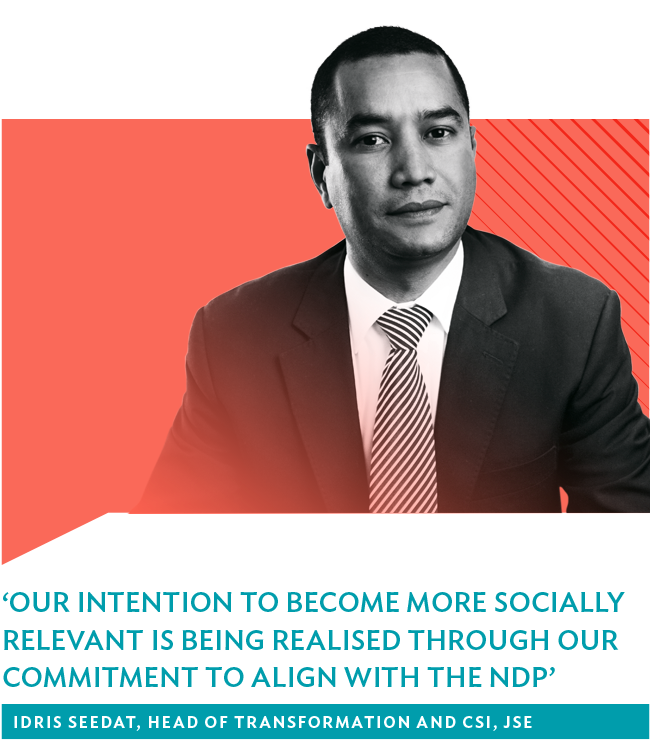 The prizes are also motivating. The Schools Challenge awards R3 000 to the best-performing school team in each portfolio every month. The prize basket at the end of the Challenge equals a total of R180 000 for the top-five school teams across all three categories. The University Challenge’s top-three winning teams compete for their share of R60 000, with the first-place winners also receiving an all-expenses paid trip to an international stock exchange.

The real beauty of the Challenge is its ‘gamification’ profile, which in any modern society holds much appeal for the youth. ‘In the early years of the Challenge, our interaction was predominately with schools in the Gauteng area because Johannesburg was where the JSE operated and continues to operate from,’ says Seedat.

‘As the game expanded we have moved from teams placing their trades via post, to fax, and now online, with the latter introduced in 2002. The online platform has helped us reach more participants but we do not exclude teams that continue to trade via fax.’

Most often such teams hail from disadvantaged communities that, despite a lack of technology, have achieved incredible results over the last three years, taking top honours. Last year’s winner, Lethukuthula Secondary School from Katlehong in Gauteng, won first, second and third place in the Income portfolio, echoing the same accolade taken by Sandisiwe High School from Mdantsane in the Eastern Cape in 2016.

The growth from 381 to 483 schools participating in the Challenge over the last 13 years is largely because more disadvantaged community schools are entering. This is a result of the JSE’s targeted approach to prioritising educa-tion-focused activities. ‘Our intention to become more socially relevant is being realised through our commitment to align with the National Develop-ment Plan,’ says Seedat. ‘We do this by providing a multi-pronged approach in taking financial education to high school learners and university students through the Investment Challenge.

‘Since last year disadvantaged community entrants have been afforded an opportunity to call on the 110 previously unemployed graduates and students who, after gaining skill sets from the JSE, now act as mentors or catalyst teachers for the duration of the Challenge.’

Seedat concludes by saying that the JSE’s social media campaigns are effectively used to publish information that assists those participating in the Challenge. ‘We also have direct contact with teachers in addition to the players, as and when required.’