Ethical behaviour is ‘good business’, proclaims the website of a global retailer, which also promises to ‘be trustworthy in its dealings with customers, suppliers and other stakeholders’. So far, so good.

This is what is expected of all organisations operating in SA – a country at the forefront of corporate governance regulations and environmental, social and governance disclosure. Even more so since June 2017, when the JSE made the principles of the King IV Report on Corporate Governance mandatory for listed entities, requiring them to ‘apply and explain’ their strategy for, among other things, accountable leadership, ethical culture and responsible corporate citizenship.

However, it turns out the retailer boasting ‘ethical behaviour’ and ‘trustworthy dealings’ had a little trouble living up to its promise – Steinhoff International, the Frankfurt- and JSE-listed group, could end up being responsible for what may become SA’s biggest-ever accounting scandal.

The company’s online statement on ethics (as of March 2018) offers no indication of its failure in corporate governance just four months earlier. In the resulting collapse of Steinhoff’s shareholder price in December 2017, shares held by the Public Investment Corporation lost around R20 billion in value – and this is the company that manages the pension contributions of government employees. 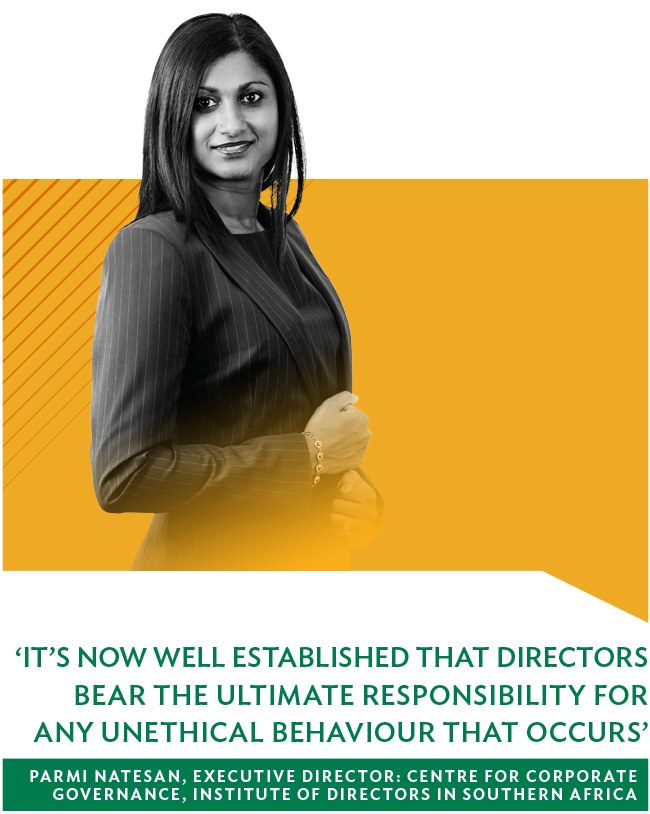 In addition to the high financial cost, corporate scandals often also damage the national economy. Parmi Natesan, executive director: centre for corporate governance at the Institute of Directors in Southern Africa, lists the consequences as impacted reputation of the country (which could affect foreign direct investment, economic growth and so on); potential job losses/insecurity; impacted morale of citizens; loss of trust from stakeholders; and the cost and time of hearings/investigations/cases.

One of the big questions now centres on how it is possible some large companies can fail so massively, despite being pictured as good corporate citizens and having oversight structures in place. Could stricter legislation prevent similar corporate collapses from happening in future?

‘Regulation cannot create competency or honesty, nor can it stop incompetency or dishonesty,’ says Mervyn King, former supreme court judge and chairman of the King Committee on Corporate Governance. While he had previously noted that the report (released in November 2016) would result in quality governance on the part of directors and help change corporate behaviour by adopting integrated thinking, he says that ‘the business landscape has changed dramatically in the intervening years [between King III and IV] and economic uncertainty has increased. The need for strong governance has never become more apparent’.

This was echoed by President Cyril Ramaphosa. ‘We will use this year to reinforce our commitment to ethical behaviour and ethical leadership,’ he said in the State of the Nation Address this year, ‘We are determined to build a society defined by decency and integrity, that does not tolerate the plunder of public resources, nor the theft by corporate criminals of the hard-earned savings of ordinary people.’

To reset the country’s moral compass, perhaps there needs to be a change in attitude towards transparency, accountability and shared value (as laid out in King IV) – rather than more legislation. 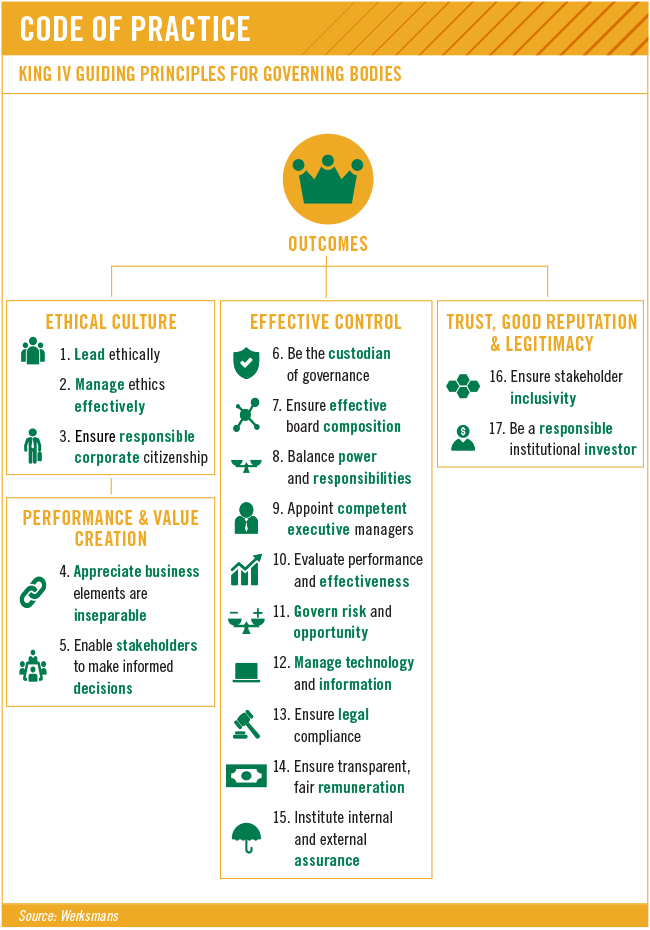 ‘We have many laws and regulations in South Africa, and compliance and enforcement of the current laws and regulations might be the answer – not more laws and regulations,’ says Juanita Steenekamp, project director: governance and non-IFRS reporting at the South African Institute of Chartered Accountants (SAICA). ‘The proposed changes to the Auditing Profession Act, No 26 of 2005, has to deal with changing the sanctions to align them to the degree or nature of improper conduct, and to also increase the level of monetary sanctions. Therefore the changes will not increase compliance or prevent failures as such.’

Natesan agrees that no law or code can realistically hope to prevent criminal activity. Those intending to do something wrong will always find a way – either by disregarding the law or by finding a loophole, she says. ‘The same general observation could be made about negligence. Both laws and codes can quite easily be circumvented by people who wish to do so, or who are only concerned with not being caught. It is for this reason that King IV places so much emphasis on creating an ethical culture and mindset,’ she adds. ‘When this mindset is present, individuals and companies will seek to act in the right way – even when nobody is looking – because they understand that to do so makes good business sense and reduces risk.’

Although the King IV Code in itself is not legally binding, non-compliance could still have legal consequences. ‘A court will consider King IV when evaluating what is regarded as practice in a particular situation, especially where governance duties are involved,’ according to Werksmans Attorneys, in its review of the code. ‘Failure to meet corporate governance practice – and, by implication, the principles set out in King IV – may invoke liability of the board in certain circumstances.’

The board of directors plays a crucial role in upholding the ethics of an organisation. ‘It is now well established that directors bear the ultimate responsibility for any unethical behaviour that occurs within their organisations. We’ve already seen some examples of directors falling on their swords when corruption becomes apparent, and we can expect demand for this level of accountability to intensify,’ says Natesan.

In the case of Steinhoff, its largest shareholder Christo Wiese stepped down from his post as chair of the supervisory board. ‘I can only say that cleverer people than this board have been duped before by people committing fraud,’ he told Parliament’s standing committee on finance. ‘To detect fraud in a company is an extremely difficult – if not impossible – task, and it becomes more difficult when, as is alleged in this case, the CEO is directly involved.’

In a complex, decentralised company such as Steinhoff, which operates in more than 30 countries and has multiple subsidiaries, effective reporting mechanisms and oversight structures are especially important – as is a well-balanced power equilibrium between CEO and board (including board committees such as those for audit and risk committee, social and ethics and remuneration).

While business fraud doesn’t necessarily involve audit failure, the accounting profession has taken a serious reputational knock in the wake of the Steinhoff and other business scandals. 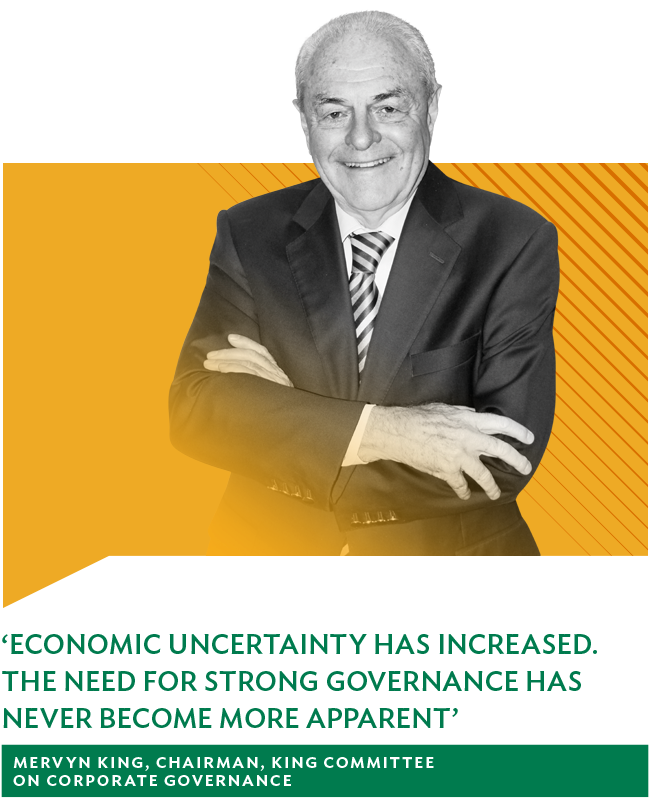 Bernard Agulhas, CEO of the Independent Regulatory Board for Auditors (IRBA), stresses the need for independent audit committees that  exercise robust scepticism. ‘If, for example, there is management intention to manipulate the financial statements in favour of share price and market capitalisation or to defraud shareholders, management would not make this obvious in their representations to the auditors,’ he says. ‘While it takes an independent and sceptical auditor to ask the really hard questions of management, which can’t be done when the relationship is too cosy, it equally requires those charged with governance to exercise their oversight independently.’

The basic principles of adopting good corporate citizenship remain the same for large listed and unlisted companies, as well as for smaller private businesses, according to Alun Rich, director at Statucor, a secretarial services firm and wholly-owned subsidiary of BDO. ‘We use the same approach of applying the King IV framework of strategy: policy; oversight; [and] disclosure, which will inevitably provide an outcome of an ethical culture, sustained performance for all stakeholders, effective control and good reputation. All that changes for different-sized organisations are the mechanisms applied to achieve this.’

To effectively oversee larger companies and avoid ‘group think’ and ‘over-cosy relationships’, King IV emphasises the need for an independent, diverse board that offers industry knowledge, skills and experience. In this context, Natesan explains the change in terminology from ‘director’ to ‘member’ that highlights the importance of independence, to not only boards but all types of governing bodies.

If good ethics are in place, it should not matter whether an organisation has a dual-board structure – where the management board is overseen by a separate supervisory board (as practised in Germany, the Netherlands and China) – or a single tier system. However, says Natesan, ‘we advocate for a unitary board structure in South Africa, so that ultimate responsibilities and accountabilities are clear. Steinhoff, for example, had a dual-board structure as their primary listing is in Germany’.

It will take a while to untangle the true extent of the Steinhoff debacle, but one thing is already clear: a leader can pay lip service to good corporate governance while steering the company in the opposite direction. That’s why, experts say, it is crucial to install anti-corruption programmes, enforce zero tolerance of corruption and monitor the right things within the organisation. ‘In monitoring management, the board should ensure there is a code of conduct in place, and that anti-corruption training and appropriate internal controls are in place,’ says Natesan. ‘It is also important to ensure service providers are vetted and sign contracts explicitly outlawing corrupt activities, and that due diligence is performed for new business ventures and foreign jurisdictions.’ She adds that having a safe whistle-blowing facility is also useful, because employees are the most likely source of intelligence about corruption.

Auditors, of course, play a formal role. Steenekamp points out that while chartered accountants can be involved in an audit, only registered auditors are allowed to perform and sign it off. ‘They need to consider the requirements of the Auditing Profession Act, which requires registered auditors to report a reportable irregularity to the IRBA,’ she says.

‘SAICA members and associates who feel uncomfortable should consider the company’s internal processes and policies, including an internal whistle-blowing process or an external prosecutorial organisation.’

The most recent accounting fiasco has proven again that poor corporate governance is a material risk. Ultimately it all comes down to ethical leadership and a culture of integrity. Or as King puts it, directors have to ‘cross the self river’ from self-interest and concern to a place of intellectual honesty.

‘With intellectual honesty, they have to act in the best interests of the incapacitated inanimate company of which they are its heart, mind and soul,’ he says. ‘That gives content to the fiduciary duties of good faith and loyalty.’ Which leads back to the fact that ethical behaviour is good business.