A decade ago, SA’s listed property sector had no foreign exposure. Today, more than 40% of the sector’s value is in overseas markets, where  it is exposed to foreign currency earnings. One of the key drivers of this shift has been the spike in interest by SA property companies and real estate investment trusts (REITs) to enter emerging markets in Central and Eastern Europe (CEE) in particular.

In line with this trend, the JSE’s Primary Markets team – together with representatives from PSG Capital, Standard Bank and Webber Wentzel/Linklaters – recently held a series of investment roadshows to the CEE region, as well as to the UK.

‘The mandate of the team is to originate new listings, so we on a regular basis engage with clients directly on the prospect of a JSE listing,’ says Patrycja Kula-Verster, Business Development Manager: Primary Markets at the JSE. ‘These engagements are done within the borders of South Africa as well as other key geographies outside the country.’

Kula-Verster says that the importance of developing a pipeline of listings is underpinned by the Primary Markets’ mandate. However, she adds, ‘we also look into market trends, sentiment and deal flow to and from a specific region. The JSE today has a number of inward listings, and what attracts these companies to our market is the large and deep capital pools in South Africa, as well as investor appetite for inward listings. In 2011, National Treasury created an enabling policy for inward listings, and today South African institutions and investors can invest in JSE inward listings without using their foreign asset allowances. This essentially means that these foreign companies are classified as domestic for investment purposes’.

The response to these recent roadshows – held in September 2017 to coincide with the annual Krynica Economic Forum – has been positive, says Kula-Verster, especially for those companies looking at listing on the JSE. 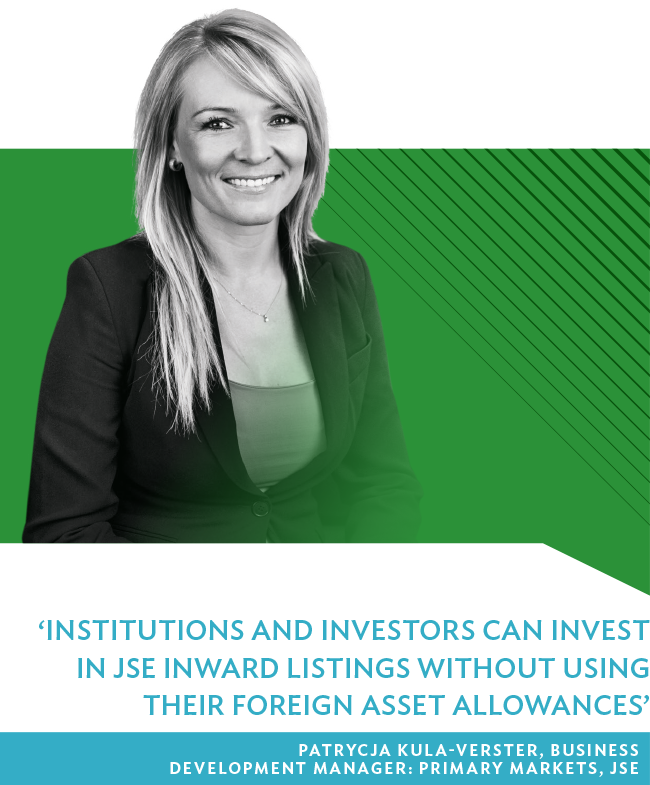 ‘The appetite for hard currency earnings has grown from South African investors in recent years due to the stellar performance of JSE-listed rand hedge stocks, as well as the fact that South African retirement funds do not have to use their offshore allowance – capped at 25% and in many cases already at their limit – to access these companies,’ she says.

Reflecting on the success of the September roadshows, Richard Stout, head of equity capital markets, corporate and investment banking at the Standard Bank Group, believes SA’s REITs will continue to seek out investment opportunities in the CEE region.

‘I wouldn’t be surprised to see the trend continue in the medium term,’ he says. ‘A key driver of this activity has been the hunt for sizeable assets that are no longer readily available within the South African market, so I expect management teams to continue to pursue opportunities outside South Africa.’

Explaining the continued interest in the CEE’s property sector, Johan Holtzhausen, MD of PSG Capital, says: ‘Property is a unique asset class and its fundamentals are very similar across the globe. This provides investors comfort, subject to specific countries’ economic and political matters, to invest across borders.

‘The CEE region shows strong economic growth underpinned by good fundamentals as we understand it, as well as on-the-ground demand. The economic structure and industry breakdown is similar to that of South Africa, which provides a good backdrop for South African companies looking for deal activity in the region. Although the economic landscape is similar, however, language barriers remain an obstacle.’

As the roadshows roll forward, and as the JSE’s Primary Markets team continues to build those cross-border relationships, those barriers will surely continue to fall away.