HOME AND AWAY - JSE MAGAZINE

Serenada shopping mall, in Kraków’s north-eastern Nowa Huta district, has all the big global brands. H&M is on the first floor, along with Zara, the Body Shop and Forever 21. Over the road, next to the massive water park, is another mall, Krokus, where you’ll find KFC, Kodak, Sephora and Orange stores, with a McDonald’s and a Toys R Us across the car park. In November, both malls were bought by listed SA firm New Europe Property Investments Rockcastle (NEPI Rockcastle) for an aggregate purchase price of €249.4 million. Once the builders have finished an extension that will combine the two malls into an integrated 100 000 m2 space, NEPI Rockcastle will invest a further €212 million in the project.

That’s a lot of money – and, more to the point, a lot of SA money going into a retail property investment in (of all places) southern Poland.

It’s part of a flood of SA money into Central and Eastern Europe (CEE). Just days after announcing the Polish investment, NEPI Rockcastle confirmed that it had invested €30 million in the first expansion phase of its mall in Galati, in eastern Romania. Added to the €40 million it spent acquiring the mall in 2013, that brings NEPI Rockcastle’s total investment in that Romanian mall to a massive €70 million.

‘Investments in recent years reaffirm the strong commitment of NEPI Rockcastle to the development of the retail market in Romania and, at the same, time to our customers,’ NEPI Rockcastle asset manager Sebastian Mahu said in a statement.

Those investments are also representative of a broader trend in SA investment flow. ‘JSE-listed companies have made a number of acquisitions or are establishing operations in Poland, and more are looking at the broader CEE region,’ says Patrycja Kula-Verster, Business Development Manager: Primary Markets at the JSE. The exchange has one Polish listing, Globe Trade Centre (GTC), and it’s working to promote further investment in the sphere.

In September 2017, says Kula-Verster, ‘the JSE – together with other South African advisers – embarked on a roadshow to London and Poland. The JSE had meetings in London and Poland, and  attended the economic forum in Poland, with some additional follow-on meetings in Warsaw. Post the roadshow, we are continuing our communication with the ecosystem and continue to engage with potential issuers about the prospect of listing. We are promoting interest across sectors. However, the majority of the deals have been in the retail property space’.

Significantly, up to 40% of that listed property sector’s asset base is offshore. And half of that 40% is in Eastern Europe. The reasons behind this are fairly simple. Central and Eastern Europe are comparable to Western Europe in terms of legal safety and stability, with much more attractive yields.

Speaking at the South African Property Owners Association convention, held in Cape Town in June 2017, Fortress Income Fund CEO Mark Stevens said: ‘It’s about growth at the end of the day, and these markets are showing growth. A lot of SA investors know that they are going to get a return in offshore markets.’ Fortress’ strategic shareholding in NEPI Rockcastle means it is exposed to Romania, Poland and the Czech Republic.

Janco Jordaan, junior legal officer at multinational professional services firm TMF Group, sees it as a combination of push and pull factors. The push, he notes in a recent blog post, comes from the uncertainty around the SA economy, which he believes is forcing local corporates to look abroad for diversification and risk hedging. He argues that the attraction for SA capital to CEE could be a result of anything from high yields to stable currencies and access to cheaper debt.

‘However, apart from the very competitive yields, the above is true for the EU as a whole and perhaps even for countries on other continents,’ he states. ‘Surely this alone did not justify the approximately €3 billion of South African investment in the traditional shopping centre [TSC] segment in CEE during 2016. So what is the real pull?’

Jordaan adds that ‘along with the above-mentioned factors, the TSC segment in CEE is on the rise, as opposed to the reportedly saturated market in South Africa. An increase in rent prices of as much as €27/m2/month within three years, occupancy levels of 100% along with waiting lists being drawn up for some prime properties evidences this’.

In December, JSE-listed Echo Polska Properties purchased 12 major retail properties in Poland, in a €692 million deal described by CEO Hadley Dean as being ‘monumental’ for the group. The portfolio, known as M1, covers 446 500 m² in gross lettable area.

‘The properties are largely located in the main and secondary cities in Poland, and where EPP mostly does not have a presence,’ says Dean.

‘This transaction significantly increases EPP’s retail footprint and scale across Poland. Post the M1 transaction, EPP will have retail space of nearly 900 000 m2.’ The assets will be acquired in three tranches over the next three years, with EPP buying the assets from a consortium, 25% of which is owned by SA property company, Redefine Properties.

EPP recently stated that it aims to become a pure retail property fund within the next three years. Explaining the thinking behind this shift, Dean says: ‘EPP has always been predominately focused on retail, and the strategy to become a pure retail landlord was driven by the positive fundamentals currently present in the Polish market. The expectation is that these positive fundamentals will continue and our retail assets should benefit from the increasing growth of the middle class in Poland.’ Therein lies the attraction that Poland in particular – and the CEE region as a whole – currently holds for foreign investors.

‘The current macro fundamentals are strong in Poland, with GDP growth expected to be in the region of 4% [2017],’ says Dean, again citing what he calls the region’s positive fundamentals.

‘The relatively low cost of doing business – wages and rents are lower than most of the EU – and access to a well-educated labour force make it an attractive destination for foreign investors. These positive fundamentals have resulted in a low unemployment rate [6.6% at October 2017], and have led to strong retail sales growth in the region [8% year-on-year at October 2017].’

‘Growth has picked up notably since Q3 2016, thanks to reviving investment driven by higher EU development fund absorption and a spending spree by households in the region,’ FocusEconomics reported. Meanwhile, the most recent data available in mid-November suggests that the SA economy ‘continues to struggle after coming out of a technical recession in the second quarter’.

So what’s behind the economic growth in Central and Eastern Europe? ‘Catching up with Western levels of GDP continues to be a key driving force in the CEE region,’ says Tom Elliott, deVere Group international investment strategist.

‘At first, it was straightforward – apply Western-style economic and business management to the economy, alongside fresh investment – often coming from the West – and imported technology, and economic growth will be rapid as long as wage costs do not rise too fast and the region has access to EU markets. But as the countries became richer, these easy wins were banked and, increasingly, the quality of the domestic government’s economic policies and attitude to the rule of law determined levels of investment, business and consumer confidence, and levels of capital flight.’

Elliott warns, however, against seeing CEE as a single, homogeneous entity. If Africa is not a country, then neither are Central or Eastern Europe. ‘Russia and Turkey are very different from Poland, Hungary, Czechia and Slovakia,’ he says.

‘The Central European countries are seeing a continuation of generally successful economic policies – especially Poland and Czechia – that help support inward investment and consumer confidence. But Russia and Turkey are idiosyncratic in their application of economic policy and the rule of law. Russia is recovering from a prolonged period of low/no growth due to low energy prices and Western sanctions. Its recovery now reflects improved energy prices. Turkey is enjoying an inflationary boom cycle, thanks to years of pressure by the government on the central bank to keep interest rates lower than they should be.’ 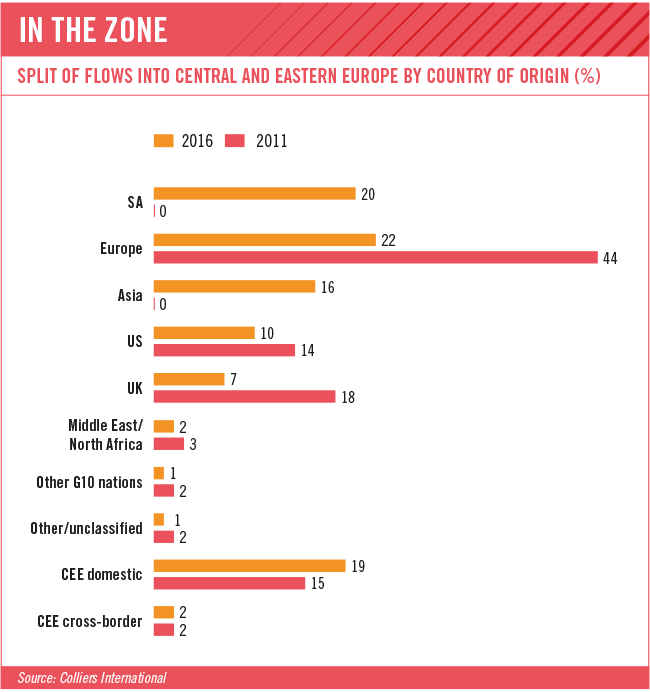 Of course, while trade and investment between SA and Central and Eastern Europe is dominated by property at the moment, it’s by no means limited to that space. SA’s trade with Turkey provides several examples. They include Metair Investments, a listed SA firm that acquired control of Istanbul Stock Exchange-listed Mutlu Akü, the leading lead acid battery manufacturer and distributor in Turkey and the Middle East, in a transaction valued at R2.17 billion in 2013. Then there’s SA white-goods firm Defy, which was acquired in 2011 by Turkish industrial group Arçelik for $324 million. ‘Defy has a big factory in Durban and a smaller investment in East London,’ says Elif Çomolu Ülgen, Turkish ambassador to SA.

‘They employ around 3 000 South Africans and contribute massively to the SA economy. Other than that, there are a number of SMEs doing a lot of business in textiles and agriculture.’

According to Ülgen, SA is Turkey’s largest trading partner in sub-Saharan Africa, with a trade volume of around $1.5 billion.

‘When you look at the general trade figures around the continent, which exceeded $6 billion in 2016, the figure for South Africa really falls behind the potential of both our countries. We know that both the Turkish government and Turkish entrepreneurs can do more; and likewise South Africa can invest and do more trade with Turkey.’

As it stands, Turkey has no trade agreement with SA, and is not offered preferential trade regulations. Yet, according to Ülgen, both nations are eager to facilitate trade. For Turkey, SA offers both local opportunities and a gateway into the rest of Africa. ‘Turkey has had a keen interest in the continent as a whole for the past two decades,’ says Ülgen. ‘We recently started investing heavily in the continent by opening embassies.

‘In 2009, we only had 12 embassies in the whole of Africa. In 2017 we have 41. But just opening embassies is not enough. We have brought the Turkish development agency, TICA, in to offer a number of South-South development and humanitarian projects as well.’

In mid-2017, European retail consumer agency Brand Loyalty asked SA digital developer Sea Monster to adapt its popular Super Animals mobile app and loyalty campaign for retail clients in Spain, Poland and Portugal. The augmented reality app – which proved hugely popular in two campaigns in SA, where it was driven by Pick n Pay stores – was customised for each country through language and animation content.

It’s a small example yet it’s a potent one. Today, if you find yourself – far from home – in one of Poland’s urban shopping malls, there’s every chance that you’ll pick up a set of SA-developed educational trading cards… And that the mall you are walking in will be owned by SA investors.