The JSE is supporting the drive for foreign investment

In the spirit of promoting President Cyril Ramaphosa’s message for renewed investment in SA, the JSE – in partnership with UBS, Standard Bank and Old Mutual – hosted the annual SA Tomorrow Investment Conference in New York in November, presenting a strong message: SA is an exciting investment destination with a plethora of opportunities.

Zanele Morrison, JSE Director of Marketing and Corporate Affairs, says that while some may feel that this is the same narrative that has been punted over and over, ‘there is a new twist in the investment story, that being the momentum of reform that is beginning to manifest, and that as an emerging market that’s already well-established on the continent, South Africa’s financial and legal infrastructure is world-class’.

It’s not an easy message to champion, given the current economic climate, especially with SA’s state-owned enterprises, particularly Eskom, challenging the business and investor environment. ‘This is why it’s so important that we take a partnership approach with government on investment drives so that its representatives can directly address the challenging questions and provide answers about leadership, reform and renewal,’ she says.

Morrison highlights what Leila Fourie, Group CEO of the JSE said in New York. ‘At the JSE, we – more than most – understand that investors are looking for policy certainty, at how we address challenges, the forthcoming structural reforms, and the effective execution of plans. What they need are assurances.

‘The JSE is well-placed to enhance trust and confidence in the country and its financial system by providing credible, secure and well-regulated markets. We believe strongly in South Africa’s potential and it is our mission to work with our partners to help drive our economy forward.’ The JSE’s partners include those who attended the conference, such as the Minister of Public Enterprises, Pravin Gordhan, as well as Sim Tshabalala, CEO of the Standard Bank Group, and Old Mutual’s interim CEO, Iain Williamson. 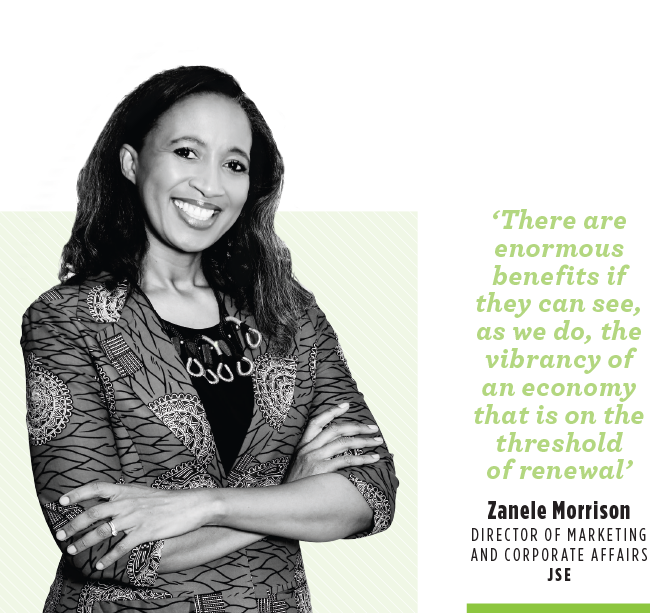 ‘It is the calibre of such listed-company executives that investors also want to hear from,’ according to Morrison. ‘International investors want to get a verbatim sense of how businesses are navigating the economic climate, how they are structuring their businesses to be solid and robust, what the impacts of B-BBEE are, and so on. The businesses with which the JSE partners are diversified and highly respected listed companies, so when they speak out about their growth and optimism, investors tend to listen.’

And the opportunities are vast. Mining for example, which is transitioning to a more mechanised environment, requires new technology and infrastructure to support it. A draft oil and gas bill, now separate from the mining industry, will drive the energy market. The introduction of carbon tax is yet another progressive step forward.

With policy certainty such as the above, SA presents as very contemporary to its US and European counterparts and remains a leader on the continent in terms of driving the regulatory environment.

Morrison says that you don’t have to look hard for the excitement to build. ‘The government, for example, has committed to a R100 billion investment into the national Infrastructure Fund over the next decade. There are many similar projects that we are punting to private investors across the sectors of forestry, manufacturing, telecoms and ICT, transport, energy, agro-processing, consumer goods and pharmaceuticals.

‘What we need to do is bring back confidence around investment in SA. The JSE aims to be one of the catalysts in motivating this, and proving to investors that there are enormous benefits if they can see, as we do, the vibrancy of an economy that is on the threshold of renewal.’