Working with Strate to deliver a new equities settlement system

In early 2016, Strate – SA’s central securities depository – launched a new system for the settlement of securities for all securities classes. After a multi-phase roll-out, the project concluded recently with cash equities being moved onto the same platform as bonds and money market.

The system uses Tata Consulting Services’ TCS BaNCS market infrastructure product suite, selected for being a world-class central supplier database (CSD) solution for the electronic settlement of securities. Throughout its phased roll-out, Strate’s TCS BaNCS project had an ambitious goal: to offer the market a streamlined service, where multiple systems are consolidated into one, and more innovative products can be brought to the market in a much shorter time.

‘By letting all security classes sit on the same settlement system, Strate was attempting a first for South Africa,’ says Chris Grove, the JSE’s Head of Market Services. The project hit some speed bumps during the debt instrument (DIS) phase for the bond market. ‘The JSE and some of our clients still remembered the pain that was felt during the DIS project in 2017,’ says Grove. ‘So when cash equities moved onto that same settlement platform, there was some anxiety. As the JSE, we knew that this phase of the project needed to be done seamlessly. When it comes to settlements, the cash equities market deals with significantly higher volumes than the bonds market does. This would be the first time that settlements would occur on the same settlement platform across different security classes. And if something were to go wrong…’

Grove’s voice trails off. The consequences of a failed migration would be disastrous for the market. ‘That’s why it was so important – for Strate, for the JSE, and for all our clients and stakeholders – that the project was delivered successfully, on time and with no negative impact to our clients.’

He explains the steps taken by the JSE and Strate to ensure a smooth transition. ‘One was stakeholder engagement,’ he says. ‘We made sure that all the respective parties were involved and communicated with throughout the project, and we clearly explained their roles at every point. The JSE joined Strate [on visits to] overseas clients during the project. 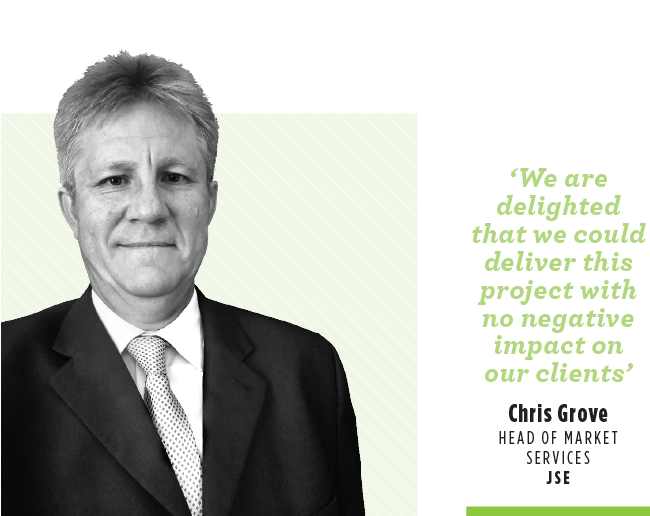 ‘Most importantly, no changes were made as far as the settlement model itself was concerned for cash equities,’ adds Grove. ‘This meant that there was no change to our clients’ business operations.’

From the JSE’s point of view, the most important part of the project was the regression testing, where the exchange’s integration into Strate and the various CSDs was rigorously tested to confirm that moving cash equities settlements onto Strate’s TCS BaNCS infrastructure had not had any adverse effects.

‘It was the first time that the JSE had tested bonds and cash equities settlements simultaneously on the same settlement platform,’ says Grove. ‘We’d never done that before, but we insisted on shielding the brokers from having to do the testing themselves as much as possible.’ As the JSE’s project lead, Grove personally mandated the final stage of testing, enabling brokers to monitor the processes and see that everything was working the way it was meant to.

The result of that careful approach was exactly what Grove and his team wanted. ‘The implementation was smooth with zero negative impact to our clients,’ he says.

‘Moving cash equities settlements onto a completely new technology stack, from a Strate point of view, was a very large and complicated project. While it was Strate’s strategic initiative, the JSE was very successful in the part we had to play. We are delighted that we could deliver this project with no negative impact on our clients.’

If anything, Grove concludes, the new TCS BaNCS platform will make life easier for clients across the market as integration for equities, bonds and money market securities is now into a single settlement platform.