As analysts continue to debate Africa’s economic growth rate, development agencies steadfastly continue to ensure that much-needed infrastruc-ture improvement is funded, largely through partnerships with institutional and private organisations. An example is the recent signing of an MOU between the African Development Bank (AfDB) and African Securities Exchanges Association (ASEA), of which the JSE is a founding member.

The MOU is a five-year agreement to ‘amplify the impact of strategically aligned joint efforts to promote resources mobilisation to fund Africa’s economic growth’. It is, however, much more in-depth than the AfDB statement suggests.

Palesa Shipalana, Head of Public and International Affairs at the JSE, says: ‘The AfDB is very keen to aid in the development of capital markets, which will help address African challenges and facilitate its ability to invest in its own economies, and thereby allow nations to grow together.

‘There are four basic objectives of the MOU: to develop financial markets infrastructure; improve market liquidity and participation; share information; and aid in building capacity amid other financial and capital market programmes.’

Shipalana explains that one of the primary instruments that will enable the initiative is the African Exchanges Linkage Project (AELP), which addresses the lack of liquidity in the continent’s capital markets. ‘The AELP essentially does what it says. It creates links across market borders. This is something that has worked remarkably well in the Asian market. 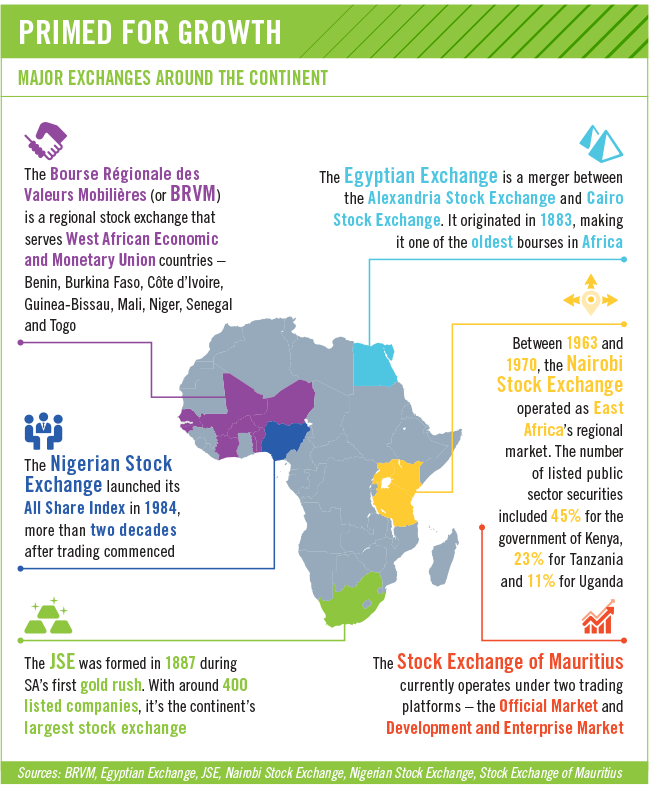 ‘However, before the ASEA committed to the project, a feasibility study was undertaken to determine whether African economies could benefit, and how to custom-fit it for the market,’ she says.

What is unique about Africa as a whole is that it does not present a liquid market, and this is a barrier to attracting investors.

While African capital markets are upgrading and modernising on a number of levels, not a huge amount of trade occurs. The study, however, had to take into account the JSE’s level of development and standing in the world as one of the top 20 global exchanges globally.

According to Shipalana: ‘AELP shrinks this conundrum. It allows the exchanges to trade interconnectedly. Even if a primary listing is in Nairobi, the investor will in future be able to trade with any of the ASEA members in one seamless trade – quickly and more efficiently. The origin of the trade no longer matters.’

Additionally, linkages work to economies of scale, so the larger the number of exchanges invested in the AELP, the less costly it is for members to invest in infrastructure and regulatory programmes – and these savings can be passed on to the traders.

Giving credence to the concept and the MOU, other exchanges have applied to be part of AELP, such as Egypt, which Shipalana says is extremely exciting because it brings the Middle East belt into the mix. ‘Mauritius – considered the financial hub into Africa from India – is also keen to participate, as is the Bourse Régionale des Valeurs Mobilières [also known as the BRVM], which serves a large part of the West African coast.

‘We are witnessing comprehensive commitment and excitement around this concept, as well as political buy-in from different nations that are required to change laws to enable cross-border trade,’ says Shipalana.

‘To have peer exchanges collaborating in this manner will change the way we share information and, more importantly, build capacity for all.’