Made to order - JSE MAGAZINE

Investors on the JSE and Wall Street are increasingly slicing trades into smaller bits in order to mask their strategies, underlining the growing complexity of stock market trading.

Already, financial institutions wishing to make trades in the tens of millions of rands on the JSE have been able to place ‘hidden’ orders on the central order book. The hidden order function cuts the potential impact on market prices of visible orders to buy or sell. This functionality has been enhanced during the equity market enhancement initiative by the JSE to ensure even higher execution probability on these large-in-size orders.

As of 26 September 2016, traders have been able to link ‘non-visible’ orders to trade against live market prices through a function known as ‘pegged hidden orders’. The improved functionality allows large orders to remain hidden as per current functionality, yet enables them to track market movements and increases the possibility of execution, according to the JSE. Large buyers are now able to ‘peg’ orders to the best bid, or the highest price that a buyer in the pool of investors is willing to pay.

Conversely, big sellers are able to peg orders to the best offer – the lowest price a seller is willing to dispose at. Alternatively, buyers and sellers of big stakes are able to peg the order to the mid point of the best bid and offer.

Size requirements of these large ‘hidden’ orders have also been reduced from the previous methodology to improve the usability and probability of execution. In any public market, there are execution risks associated with conducting these large trades (known as ‘block trades’), as they have the potential to ‘move the market’ or signal the intentions of a potential large trade. An example would be a significant shareholder of a company with a long-held bullish view of a stock suddenly deciding to offload the entire stake.

To avoid the market moving against the seller, the trader will not enter the total order all at once but filter it into the market throughout the day. With the ‘pegged hidden order’ functionality, the investor can still put up the order in its entirety and not be fearful of a large market move against them.

Any execution with a ‘pegged hidden order’ is immediately published to the entire market for transparency. The change will not compromise the openness of the exchange, according to Tshwantsho Matsena, Head of Trading at the JSE’s Trading and Market Services Division. ‘The visibility and transparency will still be there. All we are doing is providing different types of execution without price impact or compromise to trading,’ says Matsena.

A further feature introduced by the JSE is the ability to conduct a central order book cross trade. This functionality allows a trading member firm to safely execute a trade in full, within their own firm and to do so utilising the central order book of the JSE. These orders execute immediately with each other and have to occur within the BBO (best bid and offer). Cross trades will be disseminated to the market via the market data gateways and will be clearly identifiable, according to the JSE. 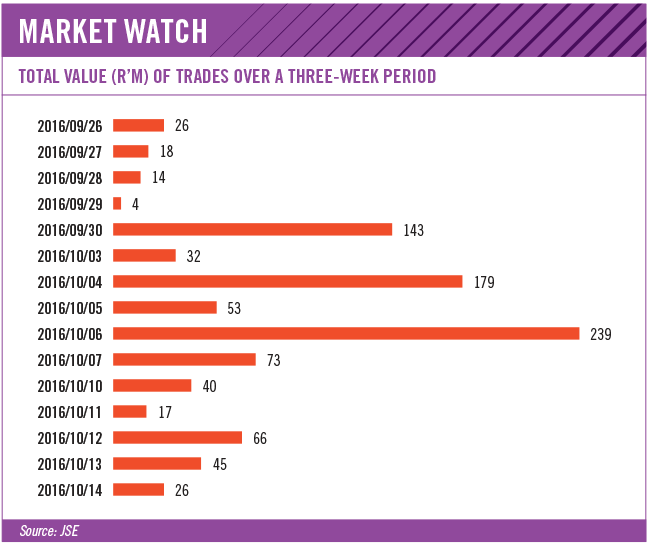 While few JSE trades take place off the market – in the form of ‘private’ pre-negotiated transactions between two parties – primary exchanges offshore face growing competition from trading in alternative financial forums, referred to as ‘dark pools’, provided by investment banks. As reported by Bloomberg, in the US close to one in five trades take place in dark pools. In these pools – and similar to the new JSE enhancements – investors are able to trade ‘without telegraphing their intentions’, according to Investopedia. However, the transaction prices are still published after the trade has taken place.

A feature that was already prominent in the Top 40 segment of the JSE, the closing price cross (CPX) session, has also been extended to other segments on the exchange. By allowing traders to trade at the closing price, it has been determined for the day, the JSE is adding a further ability to match trades at a guaranteed price.

The last enhancement implemented in September allows investors to trade for a limited period at closing prices at the end of the trading day, known as the end of day (EOD) volume auction call. Where the CPX is an extension of the visible continuous trading session, the EOD volume auction call session allows large orders to be submitted without being displayed to the market. The ‘hidden’ nature allows traders to place large orders at a known price to interact with other traders and investors at the end of the trading day. A single bulk trade message is published at the end of the session to inform the market about the total size that was executed.

‘Pegged orders can also take part in this session if they have a hard limit specified and have opted in to participate in this session,’ says Matsena, who adds that this ‘one price’ trade makes it simpler for fund managers to calculate buying and selling price valuations. ‘Throughout the EOD volume auction, no indicative price or volume information will be disseminated, making the auction completely dark.’