TO THE LETTER - JSE MAGAZINE

After decades of ratings reviews of the SA economy, last year was the first time that the imagination of the public was captured by the role of ratings agencies such as Fitch, Moody’s and Standard & Poor’s (S&P) when the threat of a possible downgrade to sub-investment grade became central to public discourse, says Donna Nemer, Head of Capital Markets at the JSE.

‘Ratings agencies’ reviews are not new to SA – they’ve been happening for a very long time. An important consideration, however, is how much the general public really understands about ratings agencies… Does the man in the street grasp the reason and purpose of ratings and periodic reviews?’

She goes on to explain the purpose of a specific rating being assigned to a country, company or other entity (such as a state-owned enterprise, for instance) after considering factors such as the size of a budget deficit; the percentage of a country’s debt to GDP; the policy and political environments; and the prospects for economic growth.

‘It’s to reflect the view of the ratings agency on the probability and likelihood of a default, and how probable it is that a country, company or entity will honour its financial commitments by an agreed date. So although South Africa has been subject to many years of ratings reviews, the rating has progressively been slipping for the past few years.’

In December 2016, S&P – traditionally the most stringent of the three ratings agencies – retained its BBB-rating of SA (one notch above sub-investment grade) but changed its outlook from positive to negative.

‘This change in outlook to negative increases the probability of a future downgrade and capital markets react differently to this. For instance, the market for credit default swaps reacts the least dramatically because it would have already factored in a downgrade. The equities market is an interesting indicator where, typically, large institutional investors have anticipated changes. In some cases, these investors would have already taken a position based on their own independent ratings and aligned their portfolios accordingly.’

Nemer says trustees who follow strict investment mandates are the category with potentially the biggest impact on a downgraded country, as they may be prohibited by these mandates to invest in anything other than investment grade assets. 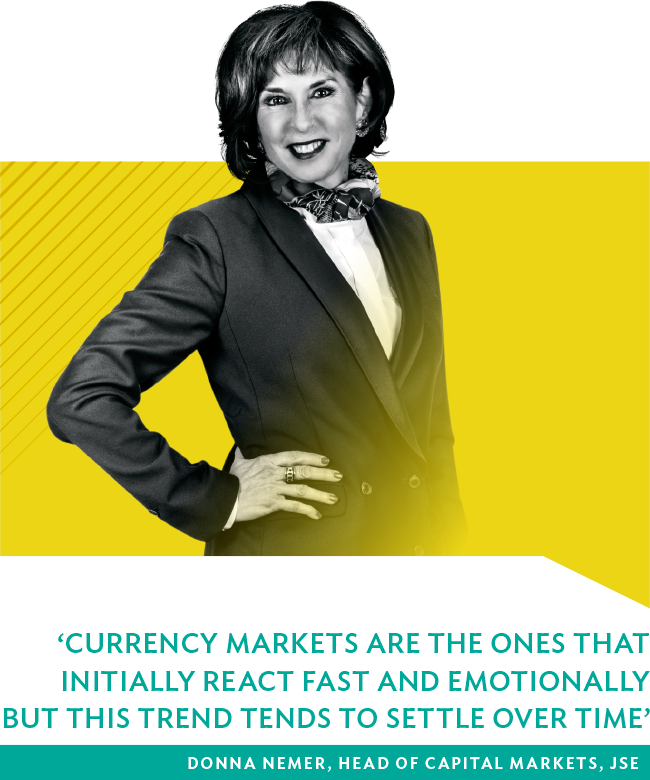 ‘This is where we typically see a potentially significant net sale of foreign assets, such as during 2016 when R124 billion worth of net sales of foreign assets left South Africa after Nenegate.’

She is referring to the controversial firing of former Minister of Finance Nhlanhla Nene in December 2015 (weeks prior to the tabling of the national budget) and subsequent unusual political events around the ministerial position that, following the events, saw the rand nosedive instantly before recovering to earlier levels of under R14/$1 for the remainder of 2016.

In the bond market, interest rates and a country’s credit rating have a more direct impact on investment levels, as investors have a mandate to either sell or purchase bonds when they square off their portfolios at the end of each year. By December 2016, foreign purchases of SA bonds amounted to R33 billion, says Nemer. ‘Currency markets are the ones that initially react fast and emotionally, with more than usual selling of local currencies. But this trend tends to settle over time.’

Looking ahead to 2017, she remains positive about SA’s ability to ‘build on the foundation laid last year through the strong action taken by the CEO Initiative and partnership between government, business and labour to avert a ratings downgrade’. Furthermore, this is in addition to the strength of the country’s vibrant, well-regulated and competent capital markets and financial institutions with ‘judicial evidence of the strength of the country’s democratic institutions’.

Nemer cautions, however, that more work must be done in 2017. ‘We must continue to search with urgency for overall policy reform to stimulate growth and job creation, as present redistributive policies are feeding into sub-par growth with a looming prospect of slipping into sub-investment grade.

‘Treasury and the South African Reserve Bank are keenly aware of – and have taken to heart – key research by the World Bank that shows the cost of borrowing increases 100 basis points with a first downgrade to sub-investment grade, and up to a further 50 basis points in the event of a second downgrade.’

She also points to ‘lingering risk’ in the year ahead in the balance sheets of state-owned enterprises that, if not addressed, has the potential to plunge the country into a sub-investment grade rating.