Stokvels are the disrupters of SA’s formal financial markets. Their strength lies in the sheer number of people who make regular cash contributions to these informal, community-based savings clubs. A total of 11.5 million South Africans are pooling their money in approximately 800 000 stokvel groups, to an estimated value of R45 billion per annum. And these are just the ones registered on the database of the National Stokvel Association of SA (NASASA), meaning that there are potentially many more that are not yet captured. This presents a huge untapped financial market.

The members themselves have yet to fully understand their massive bargaining power. As individuals, they are generally too small to be interesting to stockbrokers and financial institutions, but as a group their regular monthly contributions quickly accumulate and become very attractive.

SA’s formal financial market has recognised the collective power of informal savings clubs and is courting the thriving stokvel economy to join the formal world of wealth creation. ‘The JSE is interested in engaging with the different stokvel groups to introduce them to the idea of investing on the stock exchange,’ says Mpho Ledwaba, Head of Marketing, Brand and Events at the JSE.

‘The different stokvel groups are brought about to serve the specific needs of the collective individuals deciding to form the group. Stokvels are a group of saving schemes that provide mutual financial assistance as well as social and entertainment needs. The motives of the schemes range from burial stokvels, savings stokvels and groceries stokvels to birthday celebration stokvels, holiday stokvels and investment stokvels,’ he says.

NASASA has teamed up with various role players from the formal financial sector, including the JSE and the Association for Savings and Investment South Africa (ASISA) – an industry body representing the majority of the country’s financial institutions except for banks – to bridge the gap between the formal and informal financial sectors and to nudge stokvels towards long-term investment and retirement provision.

‘So much money is being saved in stokvels but not invested in proper savings vehicles,’ says Ruth Benjamin-Swales, CEO of the ASISA Foundation. ‘It’s held in savings and transaction accounts that provide no or very low interest. This means they are not getting rand-for-rand return from their savings because of inflation. 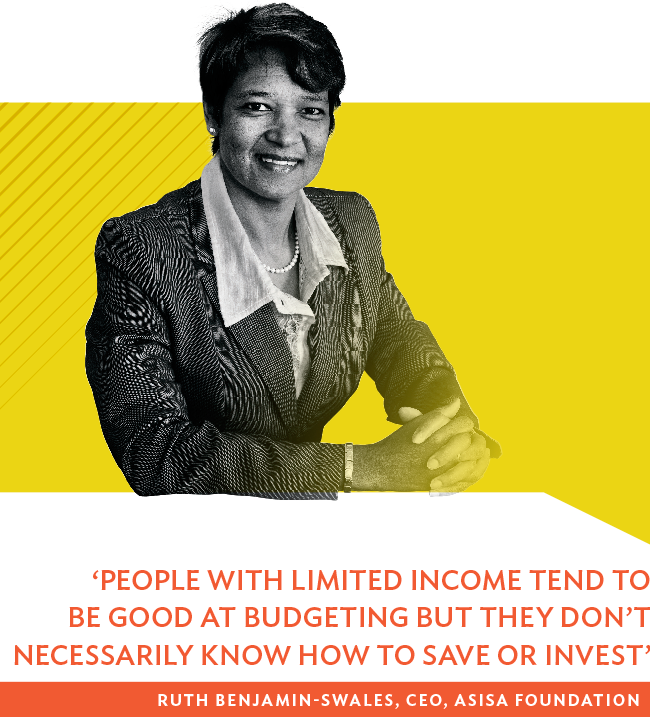 ‘From ASISA’s perspective, we are happy that those savings are being made, but we’d like to see them being more structured and formalised. Stokvel groups could save so much more with the right products, for instance, by using a money market account that offers compound interest, or they could multiply their savings through unit trusts or investing on the stock exchange.’

‘Part of the challenge is that building wealth takes time,’ says Benjamin-Swales. ‘Stokvels are consumption-driven and mostly short term, operating in a 12-month cycle. Typically, a stokvel group invests once a month, saves for a common goal and then pays out a lump sum at the end of the year.’

While the image of the stokvel has changed, most groups still operate in line with the traditional 12-month cycle. Stokvels used to be synonymous with ‘amagogo’ – older women getting together in SA villages and townships to save, access credit and support one another. But now a growing number of young urban professionals are using stokvels as a network to save while socialising with colleagues and friends.

Andile Mazwai, CEO of NASASA, has called stokvels ‘a human experience’, underlining the importance of their social function. Historically, stokvels have catered for low-income earners, but they are by no means restricted to this market segment.

Lynette Nicholson, research manager at Old Mutual, says the survey found ‘a continued sharp increase in stokvels and savings clubs’. She adds: ‘Stokvels remain a popular informal savings vehicle, with 59% of black households contributing to at least one stokvel per month.’

The concept has kept up with modern times, originating from the 19th century ‘stock fairs’ held by English settlers in the Eastern Cape. According to NASASA, these rotating cattle auctions became colloquially known as ‘stokvels’ by locals who combined their cash to trade livestock.

Today stokvels are trending on Twitter and feature on Facebook, WhatsApp and other social media platforms, and recently had their own phone app launched (StokFella) that enables members to digitally track their savings. This reduces the risk of unauthorised withdrawals and misappropriation of funds.

Internet and cellphone banking have also boosted the safety of the investment, with some stokvels using cashless and automated transactions. Online platforms, however, have simultaneously amplified the risk of scams, including pyramid and ponzi schemes, which go against the big-hearted ubuntu spirit of the stokvel. In an unregulated space, there’s risk associated with financial interactions that are built on trust relationships. Therefore, financial advisors keep cautioning stokvel members that ‘if something sounds too good to be true, it probably is’.

Many South Africans are ill-informed when it comes to basic financial literacy, which includes budgeting, signing contracts, understanding debt, interest and financial risk, says Benjamin-Swales. ‘People with limited income tend to be good at budgeting and stretching their rands but they don’t necessarily know how to save or invest.’ 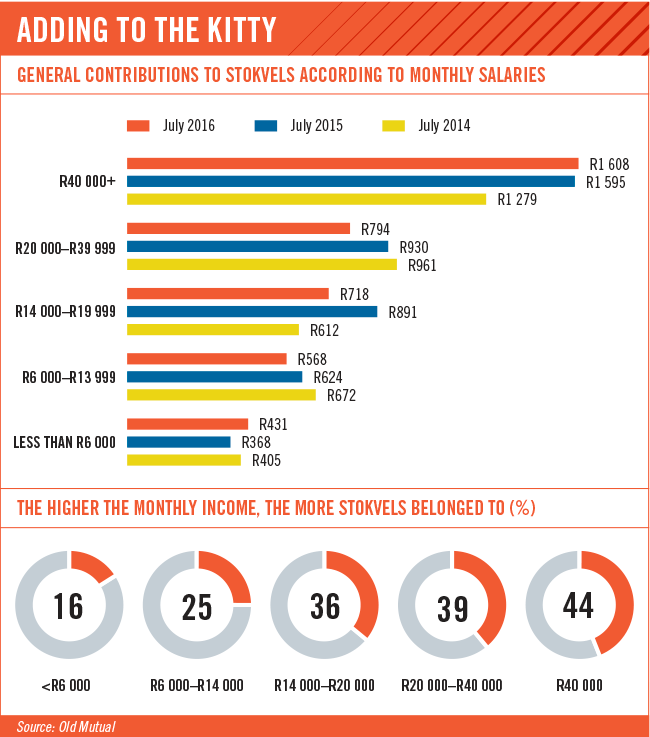 That’s why the ASISA Foundation conducts basic financial literacy training through its Saver Waya-Waya (meaning ‘to save on and on’) initiative, which targets NASASA members as they are already in the habit of saving. It offers participants tailor-made basic financial education followed by a 12-week micro-entrepreneurial bootcamp. ‘Financial inclusion is absolutely critical for the financial stability of our country,’ says Benjamin-Swales. NASASA conducts monthly stokvel indabas in townships to communicate directly with members and give them a platform for sharing and learning.

The JSE is also committed to improving financial literacy and invites the participation of all South Africans – including stokvel groups – on the exchange. ‘Our primary aim is to get the general public to understand how the stock exchange operates and how investments are done at the JSE,’ says Ledwaba.‘One of the common barriers to investing is a lack of financial knowledge about the various financial products. We embark on roadshows as well as exhibitions targeting the ordinary man in the street so that we can demonstrate that anyone can access and invest on the stock market.’

There are several products available for stokvels wanting to invest on the JSE. Ledwaba explains that the group needs to start by drawing up a resolution in their constitution stating their aim to invest funds and then open an account with a stockbroker. ‘They also need to provide FICA documents for their office bearers. They can find a reputable broker online at www.jse.co.za. We also distribute this list at every event where we engage with stokvels,’ he says.

One investment vehicle are exchange traded funds (ETFs), which are portfolios of index shares that offer stokvels low-risk access to the stock market, says Mike Brown, managing director of specialist website etfSA. He adds: ‘Switches – if investment strategy changes; new inflows of cash from fresh members; partial sales to accommodate members who leave the club; and recurring [debit] order investments, are all catered for.’

There’s also the option of tax-free ETFs and savings accounts, where investors can contribute up to R30 000 annually (and R500 000 in total) without being liable for tax. However, this only applies to individuals. Mazwai said in a radio interview: ‘It doesn’t allow for the pooling of that benefit. So if there are six in my stokvel, we can’t say we all have a R30 000 tax-free benefit – let’s then put it together and make it R180 000. That’s the piece of legislation, which if we were to change it, would make it much easier for stokvels to save the way they do.’

There are currently not enough investment products catering for stokvels, says Benjamin-Swales. ‘We are trying to get people to think differently in order to move away from cash savings towards long-term investment. The challenge to the financial services industry is to be more creative in providing investment solutions for this market.’