AltX, the JSE’s secondary board for small and medium-sized companies, is often considered the lesser of the two trading platforms. This, however, is a myth, says Nicole Cheyne, AltX Business Development Manager for Capital Markets. She says AltX should be taken seriously as a tool for small and medium-sized local and foreign businesses to raise capital, attract investors – including institutional – and to grow and gain exposure.

‘With a total market capitalisation of R33.9 billion at December 2015 and listings totalling 64, AltX has proved that it’s a catalyst for growth, since its inception in 2003.

‘It offers opportunities for strong growth to smaller companies, best illustrated by the fact that AltX has the world’s highest migration rate from a small-cap secondary board to its main listing platform compared to its peers.

‘Many companies like Rockcastle and Curro migrated from AltX to the JSE’s Main Board and immediately became mid-cap companies due to the phenomenal growth they were able to achieve through their initial AltX listings.’

By the end of 2015, 16 of the 17 foreign AltX companies had dual-listings on other exchanges, while an encouraging 25% of those listed on AltX since 2003 had elected to move to the JSE’s Main Board. In addition, over the past two years AltX improved its overall liquidity from a low of 6.8% in 2013 to 10.16% last year, due to increased trading activity. ‘All this confirms that AltX offers vast growth opportunities for businesses,’ she says.

To date, AltX has had 29 delistings but Cheyne explains that these are not necessarily indicative of a failed company or trading platform. ‘One must view each delisting in its proper context. In the majority of cases – between 70% and 80% – companies delisted after positive development and growth. The delisting then forms part of a buy-out and consolidation into a larger, growing company that finds the AltX-listed companies very attractive due to their performance and growth. 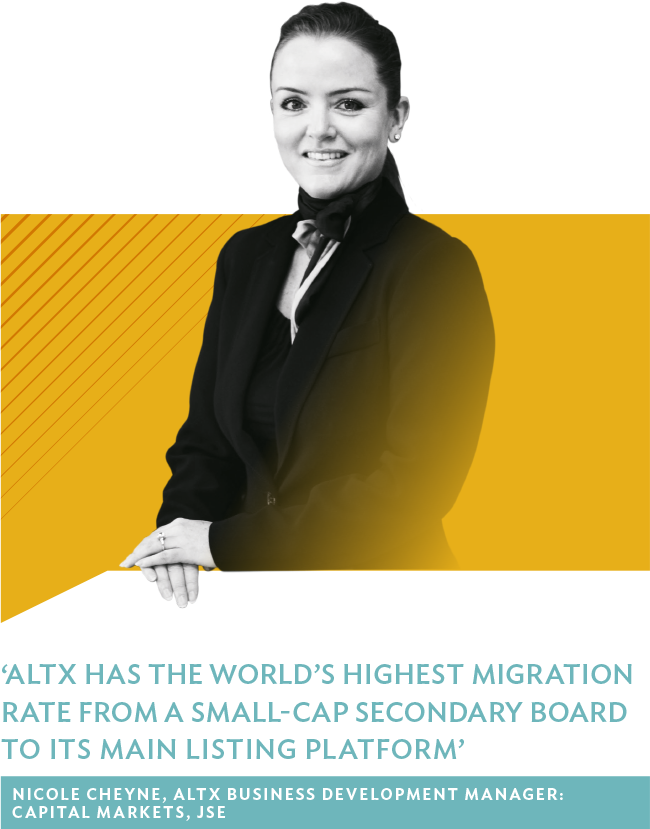 ‘No more than 15%, by far the minority of delistings, were as a result of non-compliance with listing requirements or liquidation. Given the fact that smaller companies are, by their very nature, more entrepreneurial, it’s often this very failure that leads to the next success.’

She says that while liquidity is important for equities for AltX companies, ‘it’s a lower priority until they mature in their business cycle and are ready to relinquish more control’.

Other common misconceptions around small-cap boards such as AltX are that institutional investors don’t invest in them; only start-up stocks list; corporate governance is sub-standard; and there is no coverage of AltX stocks.

‘Big investors will consider all opportunities that offer a chance for reward and many have faith in the AltX firms,’ says Cheyne. ‘Investors make investment decisions based on the level of compliance, among other factors, and the JSE spends much time ensuring AltX companies are up to listings standards.’

She also points out that often companies listing on AltX have been in operation for many years, and are under good management.

‘AltX companies sometimes have superior practices compared to companies on the JSE’s Main Board and maintain extremely high-level practices throughout. Directors attend an induction programme and the company must have a registered designated advisor who guides them on listing rules.’ Cheyne adds that the JSE hosts events with financial institutions and their private banking clients where AltX and small-cap companies can demonstrate their investment case.