Companies listed for a period of at least 18 months on the London, Australia and Toronto stock exchanges, as well as the NYSE and NYSE Euronext, can save considerable time and money if they pursue secondary listings on the JSE through the exchange’s fast-track listing procedure, according to Patrycja Kula-Verster, Business Development Manager: Capital Markets at the JSE.

This streamlined secondary listing process for international companies to join the JSE means that the secondary listing gives them the opportunity to access SA’s deep pools of capital through the JSE’s equity markets. The added benefit for foreign companies seeking a listing on the JSE is the fact that inward-listed companies are classified as domestic for investment purposes.

Rand hedge stocks have been of interest to a number of SA investors as this gives them exposure to hard currency outside the country. The fast-track listing process lowers the cost and time involved by eliminating a second round of administrative preparation. ‘Because there is no need for a pre-listing statement, the fast-track procedure is quicker and easier than a conventional secondary listing. In fact by global standards, the fast-track listing process may be quicker than most international exchanges,’ says Kula-Verster.

‘The process allows companies to join the JSE within a mere week or two – provided that all the information is available on application of listing. Three international companies, Sirius Real Estate, Capital and Regional, and Anheuser-Busch Inbev SA [AB Inbev] have completed their secondary listing on the JSE by way of the fast-track listing process.’

A key feature of this process is that the company seeking a secondary listing makes an announcement that contains certain disclosure items such as its latest published information and annual report. There is no requirement to make the conventional pre-listing statement normally associated with a standard inward listing. It is necessary that the annual report be prepared in accordance with the requirements of the exchange where the company has a primary listing for 18 months or more. 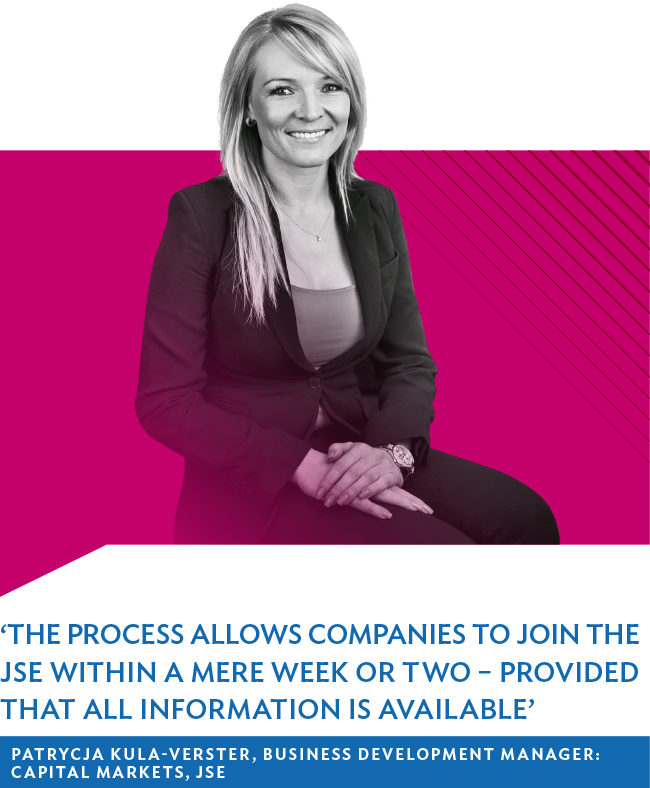 AB Inbev – a leading global brewer with headquarters in Leuven, Belgium – has a primary listing on Euronext and NYSE, and sought a secondary listing on the JSE’s Main Board through the fast-track process last year when it merged with SA brewer SABMiller. The latter had been listed on the JSE prior to the merger.

The European brewer’s secondary listing on the JSE was obtained in just 21 days. The deal is expected to be a critical driver of growth for the company on the African continent.

German property firm Sirius Real Estate – with a primary listing on the AIM Market – was the first company to obtain a secondary listing by way of the fast-track listing process on the JSE’s AltX. The AltX Board is the equivalent junior board to the AIM market. Sirius listed on the JSE on 5 December 2014 (€249 million market cap). Before the inward listing the market cap was €201 million.

The entire listing placement of €40 million was done to retail investors and was very well received by the market, so much so that it was 50% oversubscribed. A figure of €36 million was placed in SA and €4 million in the UK. In June 2015, Sirius raised a further €50 million (€48 million in SA and €2 million in the UK), which attracted large institutional investors. Sirius is currently the largest AltX company, with a market cap of €388 million.

Another international firm to have made use of the fast-track listing procedure was London Stock Exchange-listed shopping mall owner Capital and Regional. The company made an inward listing on the JSE’s Main Board in October last year – at the time of the deal, they had a market cap of R9.9 billion on the London bourse.

Kula-Verster confirmed that the JSE is hoping to increase the number of international bourses that presently enjoy accreditation for fast-track secondary listings. ‘Definitely, we are looking at the possibility of adding more exchanges but at this point it’s in the planning stages and too early to make an announcement.’