‘The JSE is one of the top 20 exchanges in the world in terms of market cap – which in March 2016 stood at R15.3 trillion – and has just under 400 companies listed on the Main Board. Almost one-fifth of the Main Board companies are dual listed.​​

‘The JSE’s diversified range of products and services are run off state-of-the-art technology after the exchange moved its equity markets onto the equity trading platform Millennium Exchange, developed by technology solutions provider MillenniumIT,’ he says.

According to the WEF’s 2015/16 Global Competitiveness Report, SA is also currently ranked first in the world out of 140 countries for its ability to finance through the local equity market; best globally in terms of strength of reporting and auditing standards; second in the world for the regulation of its security exchange; and third for protection of minority shareholders’ interests.

Hughes adds that while a number of heavyweights account for a large share of the market cap of the JSE’s Main Board, a diverse range of companies of different sizes and sectors can be found on this board.

According to Hughes: ‘The JSE is a diversified, full service exchange providing primary and secondary markets, as well as post-trade services. It hosts local and international business in all the main economic sectors and while historically, it was the mining and resources sectors that dominated the listings, this mix has evolved over time as the number of listings in sectors such as financial, industrial, consumer goods, property and basic materials became more prominent on the main board and AltX – the JSE’s alternative exchange for small and medium-cap companies.’ 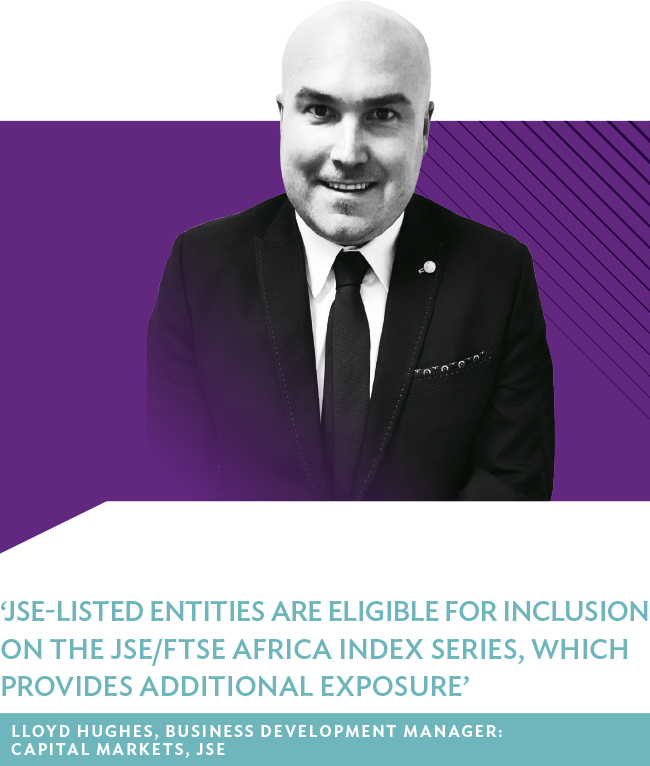 Hughes adds that 2015 saw 23 new listings – 13 on the Main Board, eight on AltX and two on the new empowerment segment of the JSE. Of the new listings, eight were secondary, of which one foreign company made use of the exchange’s new fast-track listings facility. This allows international companies already listed on certain bourses around the world for 18 months or longer, to secondary list on the Main Board or AltX.

‘Nowadays these types of cross listings can be fast-tracked to save time and costs without compromising any regulatory standards. Also, a major plus for offshore companies that dual-list on the JSE is the fact that they are considered local entities in South Africa and therefore won’t take up institutional investors’ foreign exchange control allowance, which these investors make use of for rand hedge purposes.’

Hughes notes that compared to debt financing and other forms of funding for companies wanting to expand their operations, the benefits of listing on the JSE are numerous. ‘Listed businesses enjoy local analyst coverage and high media interest – helping to improve their corporate reputation and profile. Once listed, companies improve their capital-raising ability, which can be used for organic growth or to fund acquisitions, as well as attracting international investors well able to trade in JSE-listed shares without any restrictions.

‘Importantly, JSE-listed entities are eligible for inclusion on the JSE/FTSE Africa Index Series, which provides additional exposure – both locally and internationally – and the JSE has a business development team that assists with marketing of the business.

‘Ultimately, relations with many stakeholders such as banks, suppliers, distributors and customers are greatly enhanced and it’s easier to raise equity capital and gain access to debt capital, while a listing ensures that company shares become liquid and tradeable,’ says Hughes.