A greenfield industrialisation project worth a figure of R267 million is about to add some sparkle to Africa’s busiest and largest airport. Diamonds as well as gold, platinum and other precious metals are taking centre stage at the OR Tambo International Airport Industrial Development Zone (ORTIA IDZ) in Johannesburg.

Phase 1 of the project – the Jewellery Manufacturing Precinct (JMP), located within the airport’s land boundaries – which has been in the pipeline for several years – was launched with a sod-turning ceremony in September last year.

The ORTIA IDZ is one of six IDZs in SA. Already firmly established are the Coega and East London IDZs in the Eastern Cape; the Richards Bay and Dube Trade Port IDZs in KwaZulu-Natal and, most recently, the Saldanha Bay IDZ in the Western Cape. The latest addition will be the Maluti-A-Phofung IDZ outside Harrismith in the Free State, which Cabinet gave the go-ahead in June 2015.

The IDZ concept is a vehicle to encourage foreign direct investment, job creation and economic growth – especially with regard to export – and has proved successful in nations such as Mauritius, China and Mexico. However, despite reaching some major milestones, the IDZ programme hasn’t yielded the overall anticipated results in SA.

Tumelo Chipfupa, director at Cova Advisory in Johannesburg, says: ‘One reason why the IDZs were possibly not as successful as government had hoped, may have been the fact that they didn’t have any special incentives attached to them. All the incentives on offer in those zones were available outside the IDZs as well.’

Without tax incentives or an enabling legislative framework, SA’s IDZs simply were not able to create more investor-friendly conditions within their purpose-built estate than what was offered in the rest of the country. But this could soon change.

The Special Economic Zone (SEZ) Act of 2014, which only came into effect this February, intends to invigorate and strengthen the IDZs.

As a result, all IDZs are in the process of transitioning to become part of the overarching SEZ programme. In other words, IDZs are becoming SEZs and will form one category. Other categories include free ports, free-trade zones and sector-development zones. 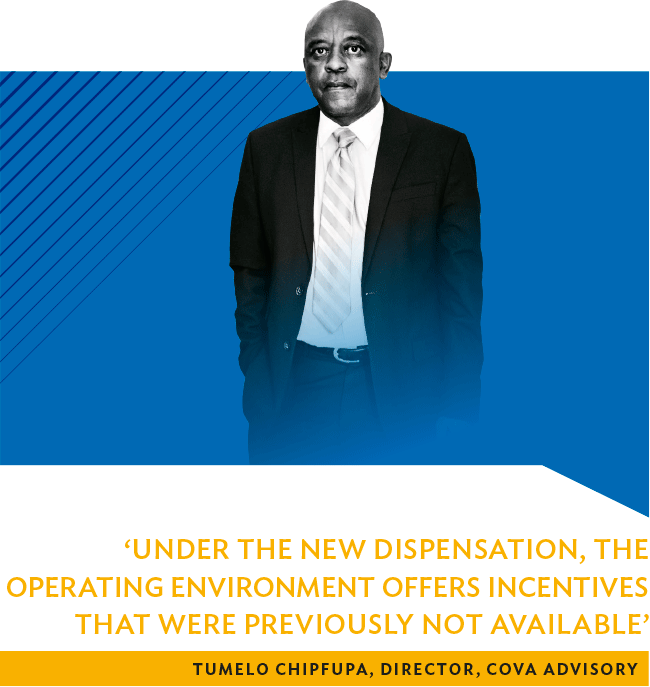 Chipfupa, who is a former deputy director-general of the Department of Trade and Industry (dti), where his responsibilities included overseeing the implementation of the IDZ programme, says: ‘Previously, IDZs were entirely geared towards export. They had to be attached to ports of entry – an airport or seaport – as to attract international companies of scale.

‘SEZs can be located inland, effectively anywhere in the country. They target a broader range of companies and have a wider industrial development objective. For instance, an investor could be in agroprocessing for the domestic market. Under the new dispensation, the operating environment offers a whole set of incentives that were previously
not available.

‘For example, the reduced corporate income tax rate of 15% for 10 years for companies settling in an IDZ; the employment tax relief for employees earning below R60 000 a year; the building allowance tax relief and the 12i tax allowance for the development of greenfield operations.’

At the launch of the ORTIA IDZ, dti Deputy Minister Mzwandile Masina said: ‘The establishment of this IDZ in Ekurhuleni will enhance the region’s role in South Africa’s development landscape. More innovative and value-added products will be produced in this region and find their way to global markets.’

To kick-start this initiative, the JMP is being built in a campus-like, landscaped arrangement, strategically located near motorways and with taxi and bus drop-off points that link into the wider public transport system.

This ties in with the idea of the ‘aerotropolis’ – a modern urban construct where the airport becomes a centre surrounded by retailers, restaurants, hospitals, hotels and now also industrial development – connecting it to the global economy. Dube Trade Port IDZ with King Shaka International Airport at its centre, markets itself as Africa’s first purpose-built aerotropolis.

The ORTIA IDZ master plan envisages facilities for the light manufacturing of jewellery and other high-value products, and caters for mineral beneficiation, diamond cutting, polishing and trading. The precinct aims to be a jewellery showcase for buyers and visitors, offering exhibition space, offices, training amenities and warehousing. The buildings will be set among tree-lined boulevards, with internal courtyards blurring the lines between inside and outside while complying with strict security protocols.

According to Gauteng IDZ project executive Seipati Mangadi: ‘In 2002, the dti promulgated what was then known as the Johannesburg International IDZ. Fast-track that to December 2010: Gauteng was issued with an operator permit for what is now Gauteng IDZ, also known as OR Tambo IDZ.

‘Our value proposition is very clear. We intend to lead in implementing the beneficiation strategy of the country to develop precincts that enable clustering, value-chain development and the development of export markets for our prospective tenants.’

In line with this, the JMP forms part of a bigger plan to re-industrialise the economy through support for value-adding, labour-intensive and innovative industries.

‘We need to look at IDZs with a long-term view – the investments and initiatives are not for the short term but 10 to 15 years from now we will realise that IDZs are bustling nodes of activity across the country,’ says Laura Peinke, business development executive at Saldanha Bay IDZ Licencing Company.

‘We need to make it easy for companies to do business in the zone and in the most cost-effective way possible. We aim to do this by establishing a process-efficient “one-stop-shop”, where paperwork is reduced and companies can start their operations with the least hassle,’ she says.

‘Also, we are currently undertaking skills and enterprise development programmes locally, so as to help prepare the communities to work to the standards these industries require, and in so doing, make their services more cost attractive to the industry.’

Saldanha Bay IDZ – situated about 130 km from Cape Town on the rugged West Coast – is marketed as an upstream oil and gas services and marine repair cluster that will incorporate a free port or free-trade zone as a value-added offering to investors. It will also comprise ship builders, rig repairers, subsea pipe and module manufacturers as well as oil and gas logistics companies. Dedicated clusters ensure maximum efficiencies, so most IDZs focus on specific investment sectors –although by no means excluding investors from other sectors. 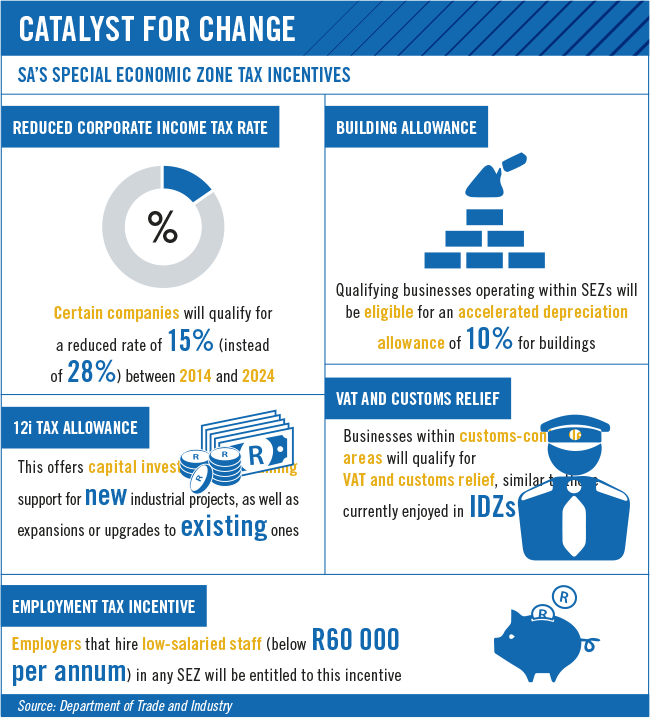 The Coega IDZ near Port Elizabeth has managed to reduce the region’s nearly complete manufacturing dependence on the automotive sector to also include sectors such as energy (both conventional and renewable), chemicals, metals, agroprocessing and aquaculture.

Simlindele Manqina, Coega Development Corporation (CDC) communications officer, explains: ‘As part of this diversification, the CDC brought 31 operational investors, with a combined investment value of R6.44 billion, and a total investment portfolio in excess of R181 billion to the Eastern Cape.

‘One such strategic investment within the IDZ is the Dedisa peaking power plant – a R3.5 billion, liquid fuel open-cycle gas turbine with a 342 MW generation capacity, which became operational in 2015.’

Dube Trade Port near Durban woos manufacturing investment in priority sectors such as aerospace, agroprocessing, electronics, pharmaceutical and textiles. Private-sector investment has already surpassed R900 million, according to Deloitte, which assisted in the city’s application for IDZ status. ‘Over the past five years, Dube Trade Port has grown to 2 840 ha and created about 16 527 new jobs,’ says the firm.

Meanwhile, the Maluti-A-Phofung IDZ – expected to be built in the Free State over 20 to 30 years – is envisaged to act as an agroprocessing and logistics hub, serving the Gauteng-Durban and Bloemfontein-Cape Town corridors. According to Engineering News, the zone has the potential to create 29 000 jobs over a 10-year period.

‘I am pleased to be able to report that through our joint efforts we are now seeing a number of IDZs gaining traction and contributing positively to industrial development and job creation,’ said dti Minister Rob Davies in his budget-vote address last year.

‘Between 2002 and 2014, the Coega, East London and Richards Bay IDZs have attracted a total of 54 investors with an estimated investment value of R4.8 billion. These investments are estimated to have created approximately 73 000 jobs.’

Peinke points out that the weakness of the SA rand is very attractive to foreign companies, which could encourage further foreign direct investment and job creation. ‘But that is not the only stimulant for investment,’ she says. ‘It’s our multifaceted value-added package that we offer.’