Risk, and the management thereof, is an integral part of trading financial instruments. Terence Saayman, Head of Risk in the JSE’s Post-Trade Services division, says that one trades to either ‘take on or hedge market or investment risk. Besides this desired risk, there is the counterparty credit risk prior to the final settlement of the transaction and operational risk in managing the trade’. Simply, this counterparty risk is that the person with whom one has traded defaults or does not fulfil their obligations in full.

As an exchange, it is critical that the JSE is actively involved in managing risk to ensure the integrity of the market it operates. Saayman emphasises that investors need absolute certainty that they will receive what they expect from the trade they conclude, on the day it is agreed.

He points out that the ‘JSE is market-neutral and because it operates the market, it sees each counterpart to each transaction. Because the JSE doesn’t make a profit whether the market goes up or down on a given day, it can be impartial in the way it treats each side of every trade. The JSE can then set market-wide standards, which keep the playing fields level for all market participants while keeping it safe’.

The JSE has set market-wide risk-management standards and it requires all participants to have resources to show their ability to make good on any future commitments. These could include cash, scrip (shares) and capital, depending on which market and where in the settlement cycle the risk arises. 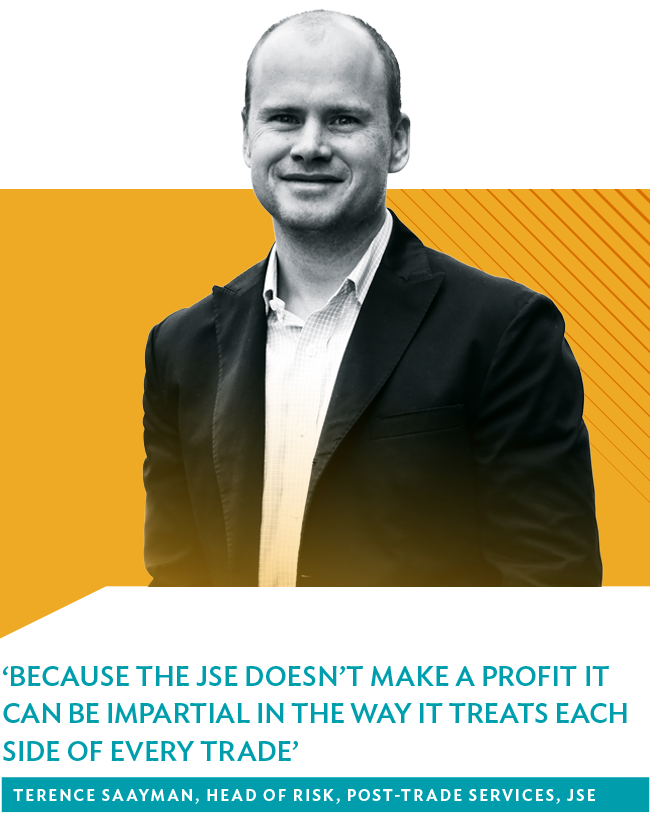 In the case of derivatives, JSE Clear – which is a subsidiary of the JSE – becomes the counterparty to each participant, and requires them to post collateral for their exposures. JSE Clear is a central counterparty (CCP) and adheres to strict international standards, which allows banks to hold less capital for trades cleared by it. This is the only CCP in Africa.

‘After the trade has been executed, JSE Clear becomes the buyer to the seller and the seller to the buyer. This means that JSE Clear stands in for every counterpart, but is not directly exposed to the market moving,’ says Saayman.

‘JSE Clear sets risk-management standards, ensures that all instruments listed to trade on the JSE’s derivative markets are indeed eligible for clearing and reduces operational risk through netting. Collateral is collected from each market participant through their clearing member, who guarantees the performance of their clients to the CCP. The CCP also operates a mutualised default fund, which reduces the cost of collateralisation for the market.’

This means that when using exchange-traded derivatives, participants face a single counter-party, allowing them to significantly reduce their overall exposures and cost collateralisation.

JSE Clear also prepares for any shortage of liquidity by establishing dedicated, on-demand credit lines with banks to ensure it will be in a position to honour payments. The JSE makes its risk-management framework transparent so that all participants can easily measure their risk in the market, and are able to understand and quantify their exposures.

All trades on the JSE spot markets are settled on a T+3 settlement cycle which, Saayman explains, gives participants the ability to express their views on the direction of the market easily and allows market makers to provide an important service to the market and investors.

He adds that aside from the requirement the JSE has of its members to guarantee the trades they execute on the equity market and to hold capital for their potential obligations, the JSE also has capital of its own backing the settlement of trades executed on this market should other safeguards prove to be insufficient.

‘The Financial Markets Act requires that each exchange must appoint a clearing house or make arrangements for the settlement of its trades,’ says Saayman. ‘Where an exchange’s clearing and settlement processes are safe and transparent, the JSE works together to ensure the risk in the market is reduced and is done so without unnecessary burden on the investor.’