Their interests span from hospitality and gaming to media, from private education to fishing, from financial services to steel and gemstones. And, while there is direct exposure to the SA economy across most companies in the equity investment instruments sector, geographical diversification is provided by the likes of Reinet Investments, with its holdings in British American Tobacco (BAT) and the UK’s Pension Insurance Corporation, as well as Rand Merchant Investment Holdings (RMI), via its short-term insurance business Hastings in the UK.

If the market cap of this sector is added up (as at early April), just three of the 13 companies listed – RMI, Reinet and Hosken Consolidated Investments (HCI) – account for more than 90% of the total value. Seven companies have market caps of under R1 billion and three at between R1 billion and about R3.5 billion.

RMI has transformed itself from a passive holder of stakes in insurance companies after its unbundling from parent RMB Holdings in 2011 to one where those investments sit alongside others where it can have ‘meaningful influence’.

As at March 2018, it held a 25% stake in Discovery Holdings, 25.5% in MMI Holdings and 29.9% in the UK’s Hastings – all listed insurers. It also holds an 87.8% stake in unlisted short-term insurer Outsurance; 100% in an investment manager unit that has taken stakes in boutique asset managers; and the whole of a business it started called AlphaCode, which funds and grows start-ups in the financial services space. Its strategy is based on three initiatives to create sustainable value: optimisation (delivering better value from its investments), diversification (creating more value by expanding into additional markets and segments), and modernisation (creating new value by acquiring and investing in next-generation financial services businesses).

RMI says that it has delivered a compound shareholders’ return of 26.3% per annum since its listing in 2011. It delivered headline earnings of close to R2.1 billion in the six months to end-December, with growth of 28%.

Reinet also listed on the JSE as an unbundling. This followed the restructuring of Rupert family businesses Remgro and Richemont in 2008. The business initially housed only a stake in BAT, and would generally pay out a significant portion of dividends received from that investment to shareholders. In 2012, it purchased a stake in the Pension Insurance Corporation, which effectively insures (primarily defined-benefit) pension funds. Reinet has also, over time, built up a portfolio of investments in private equity funds, with the bulk of funds committed to Trilantic Capital Partners, Milestone Capital (China opportunities funds) and Snow Phipps. 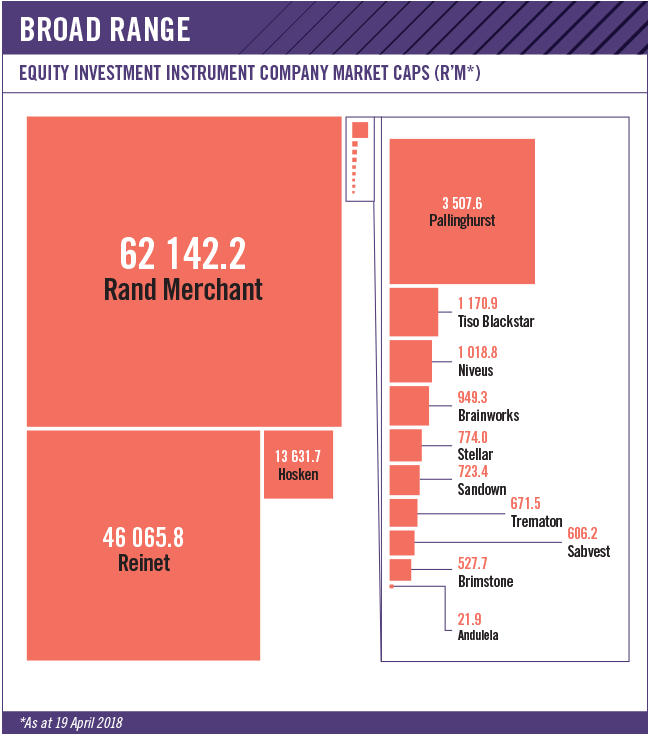 Even though the approximately 3% stake in BAT accounts for nearly 70% of Reinet’s net asset value, it has deployed a large amount of capital since 2008: it ‘has invested over €2.1 billion and at 30 September 2017 committed to provide further funding of €252 million to its current investments’. Contrast this with the fair value of the BAT stake, as at end-September, of €3.6 billion.

HCI was formed more than 20 years ago, when the South African Clothing and Textile Workers’ Union (Sactwu) ‘reversed its interest in an option to acquire a small indirect stake in Vodacom into HCI in exchange for HCI shares’, wrote chief executive and founder Johnny Copelyn in the company’s 2017 integrated report. Sactwu bought further shares in HCI and over time ‘succeeded in acquiring a stake of about a third of the shares in HCI and centralised its commercial activity through this company’.

Copelyn said the past two decades proved to be a ‘learning curve like no other. HCI became a crucible in which dreams and nightmares intermingled freely to form a potent concoction of new ideas and insights into opportunities to build commercial value’.

He added that ‘in turn, this allowed HCI to suddenly swoop on opportunities it identified, to start up new ventures, and to take on immense challenges of turning around a deeply distressed business that no one else had sought to save. Over the period HCI has built itself into a diverse investment company controlling businesses across several sectors’.

Importantly, he highlighted that ‘not everything we tried succeeded but the overall outcome has been extraordinary’. In 1997, its market cap was R1.4 billion. Today, that number is in excess of R13 billion, not counting the number of businesses that have been listed or unbundled along the way. 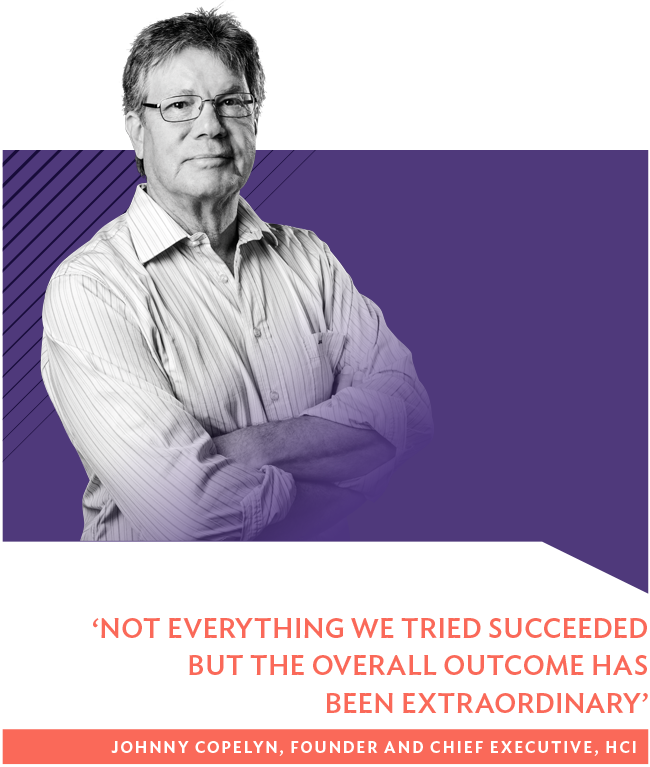 In 2017, it reported headline earnings of R1.385 billion. Nearly 60% of that came from the Tsogo Sun businesses (casinos and hotels). Golden Arrow generated a further 15%, with the gaming, mining and media units delivering around 7% each.

HCI’s Niveus is also listed under the equity investment instruments sector on the JSE, alongside its parent. This business operates more than 5 600 limited pay-out machines across the country under the V Slots brand, as well as Galaxy Bingo centres in six provinces. These are both operated under a limited number of licences granted by government. Niveus reported headline earnings of R214 million in 2017.

Pallinghurst Resources, founded by Brian Gilbertson in 2007, was initially set up as a limited-life investment fund to develop mining projects. In August 2017, it restructured into a business with three main operating entities: a platinum group metals (PGM) producer (Sedibelo); a manganese mine (Tshipi – the largest exporter of the ore from SA); and a coloured gemstone business (Gemfields, which mines emeralds and rubies at two mines – Montepuez and Kagem – in Mozambique and Zambia respectively).

‘Unlocking Gemfields’ full value potential was and remains of paramount importance to Pallinghurst Resources,’ Gilbertson said in his chairman’s report, following the release of the 2017 annual results in April.

‘Both mines are recognised as world leaders in emerald and ruby mining respectively, providing a solid platform for future expansion. We aim to build Gemfields into the “De Beers of coloured gemstones”, supporting our mining operations with a unique and industry-leading auction platform, developments in proof-of-origin technology and active marketing campaigns to drive demand for coloured gemstones.’ Pallinghurst reported a 2017 net profit after tax of $45 million.

Stalcor, a competitor to Andulela’s roofing subsidiary, is one of two non-core assets owned by Tiso Blackstar Group. The other is a stake in steel pipe/tube business Robor. Tiso Blackstar has morphed from an investment holding company, of which the former Times Media Group was one of many investments, to one where the media assets are the core (and future) of the business. Its brands include the Sunday Times, Sowetan, Business Day and TimesLive, and it owns a number of radio and television assets in SA, Kenya, Ghana and Nigeria. At the end of March, during its interim results presentation, it announced that group revenue in the six months to December were flat at R4.5 billion, while headline earnings per share rose 570%. It says it is leveraging its media base of existing assets to build ‘a modern and dynamic global media business, with its roots in Africa, focused on delivering premium, influential content’.

‘At the core, we’ve got a very strong business with good cash flows, and it’s well positioned,’ says CEO Andrew Bonamour. He adds that the group intends to focus on offloading its non-core assets, reducing debt and investing in its media business. 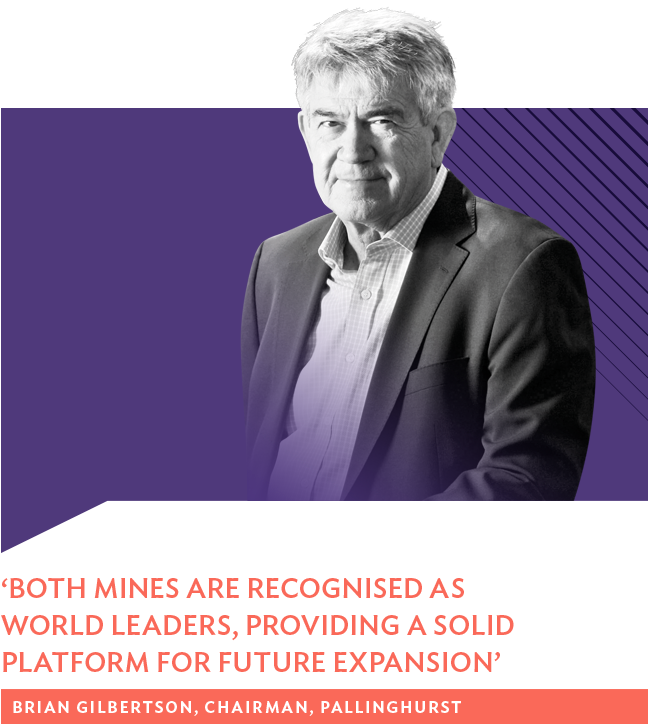 A number of more traditional investment holding companies are also listed in this sector.

Stellar Capital Partners invests in primarily unlisted assets. These include stakes in financial services businesses Cadiz, Prescient and Praxis, as well as sizeable holdings in industrial firms Torre Industries (equipment and machinery), Amecor and Tellumat. The sum-of-the-parts valuation published by the group as at 30 June 2017 shows a value of nearly R1.4 billion.

Sabvest has been listed on the JSE since 1988, with its origins in the SA Bias Group, which first listed on the market in 1948. Sabvest is run by Christopher Seabrooke who has been a director of more than 25 listed companies. It has ‘holdings in four unlisted industrial groups, long-term holdings in eight listed investments and equity funds, and offshore share and bond portfolios’.

Trematon Capital Investments has a portfolio of assets located mainly in the Western Cape. These include Club Mykonos in Langebaan, 30% of Mykonos Casino, 67% of Aria Property Group, with a smaller residential-focused property portfolio and an investment in a private education player.

Brimstone is unique in that it was set up as a black-controlled and -managed investment company. It owns stakes in a number of listed companies, including food producers Tiger Brands, Sea Harvest (which it recently unbundled and listed) and Oceana Group; private hospital operator Life Healthcare; property group Equites; and infrastructure player Grindrod. Beyond this, it has holdings in a number of unlisted businesses including Lion of Africa Insurance and Aon Re Africa. Because of its position, it can participate in restricted BEE structures. Here, it has investments in Multichoice’s Phuthuma Nathi, MTN’s Zakhele Futhi and is part of the empowerment consortium of listed tertiary education operator Stadio.

Brainworks Capital is the first Zimbabwean company to be listed on the JSE Main Board. It listed in October 2017 and generates the bulk of its revenue from its hospitality operations (where it owns a stake in the property company too). It is the major shareholder (58%) in African Sun ‘with seven resort hotels, four city hotels and two casinos under its management’ in Zimbabwe. These are managed under a number of brands including Legacy and Holiday Inn.

Most of the firms listed in the equity investment instruments sector are broadly exposed to the SA economy. If the economy grows, by and large they do well. The recent low growth environment has not helped, although forecasts for 2018 have been revised upwards (to 1.7%) by the Reserve Bank. But, even with the optimism since the election of Cyril Ramaphosa as President, most ‘SA Inc’ companies remain realistic – and cautious – about the challenges ahead.