JSE Clear, the JSE-owned licensed central counterparty (CCP), is a critical SA market infrastructure servicing the exchange’s listed derivatives, interest rate and currency markets. CCPs generally perform two clearing functions. The International Capital Market Association explains that ‘once a transaction has been agreed between two parties and registered with a CCP, the CCP inserts itself into the transaction […] or is deemed to be an original party to the transaction’. This process whereby the CCP interposes itself in the middle of a trade is a legal process referred to as novation. ‘The CCP famously becomes the buyer to every seller and the seller to every buyer.’

Tyrone Arendse, Head of CCP Governance and Compliance in the JSE’s Post-Trade Services division, says that CCP clearing is recognised globally as the preferred, most sophisticated clearing model. ‘The inherent characteristics of CCP clearing make it the most robust mechanism for the management of a potential default in the market,’ he says. ‘Because CCPs have a view of all cleared positions, it improves the overall transparency and risk-management capabilities in the market. It encourages loss mutualisation – meaning that in the case of a default, no single market participant needs to carry the burden of losses stemming from a default. And most importantly, it puts an entity skilled in the process of default management in the centre of the financial ecosystem.’ 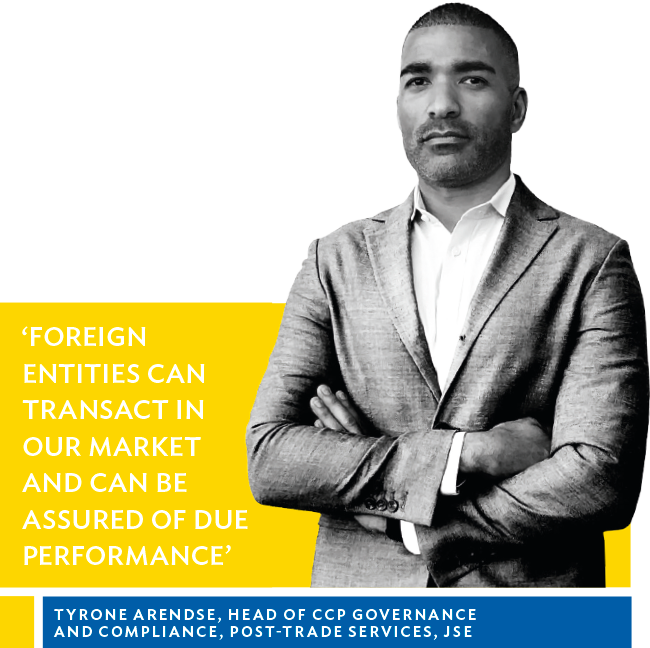 According to Arendse, a CCP can use a number of mechanisms to reduce the likelihood and impact of a default. The first is the basis on which it allows clearing members to enter the market, by maintaining appropriately rigid entry requirements. The clearing members of JSE Clear are Absa Bank, Investec, JP Morgan, Merrill Lynch, Nedbank, Rand Merchant Bank (a division of First Rand Bank Ltd), Société Générale and Standard Bank. ‘The next key defence is the pre-funded resources that the CCP establishes to protect the market against default losses. This comprises an effective margin framework – for the calculation and collection of initial and variation margin – and the establishment of an appropriately sized default fund, contributed to by both the CCP and its clearing members. The final defence is the capital structure of the CCP itself – as the buyer to every seller and the seller to every buyer, the CCP’s own capital is finally at stake should losses exceed the value of all margin and default contributions.’

JSE Clear is licensed by the Registrar of Securities Services as a clearing house, as defined in the Financial Markets Act. ‘A key imperative of the JSE and JSE Clear is maintaining the credibility of our market and its attractiveness to foreign investors and market participants,’ says Arendse. ‘Being recognised as equivalent by the European Securities and Markets Authority [ESMA] – which JSE Clear achieved in 2016 – means that trades cleared through JSE Clear by entities established in the EU receive the same capital treatment as if those entities had used the services of a CCP in their own jurisdiction.

‘ESMA recognition of JSE Clear as an equivalent “third country CCP” is a very visible acknowledgement of both the world-class clearing and risk-management capabilities of JSE Clear and the strength of the regulatory framework that we operate in,’ he says. ‘Foreign entities can transact in our market and can be assured of due performance.’