The JSE’s Green Bond Segment, officially launched in September 2017, is seeing increased appetite from investors. These are bond instruments  where proceeds will be exclusively applied to finance new or existing eligible green projects, and which are aligned with the four core components of the Green Bond Principles, as defined by the International Capital Market Association.

Akshar Sewkuran, Bonds Specialist: Capital Markets at the JSE, says that the while the local market has just four green bonds listed, the most recent of these – the City of Cape Town’s earlier this year – was five times oversubscribed.

‘This demonstrates that there is appetite for quality long-term environmental, social and governance [ESG]-focused assets. The city raised R1 billion for projects including electric buses, energy efficiency in buildings and water-management initiatives.’

Globally, the market for green bonds is valued at $895 billion, and the year-on-year issuance has doubled in size annually over the past two years. Sewkuran says Moody’s expects this market to grow by a further $135 billion in 2017.

For issuers, he says, the green bond market can offer several important benefits for green investment, including diversification to investors who are increasingly demanding socially responsible investment (SRI) opportunities; possible cost advantages as the market develops more fully; and allowing issuers in less environmentally-friendly sectors to take part in the green bond market by signalling changes to their business model and attracting a new basket of ESG-focused investors. As an example, he cites French energy giant Total, which issues green bonds to help finance a strategic shift toward renewable energy. Today, it is the world’s largest solar farm power developer.

This complements mandatory ‘real economy’ policies that lead to changes in business models, such as carbon pricing, waste reduction and recycling targets.

Finally, listing a green bond could enhance the reputation and promote the importance of governance of an issuer. Sewkuran points to positive press coverage of green bond listings by the City of Johannesburg and the City of Cape Town. 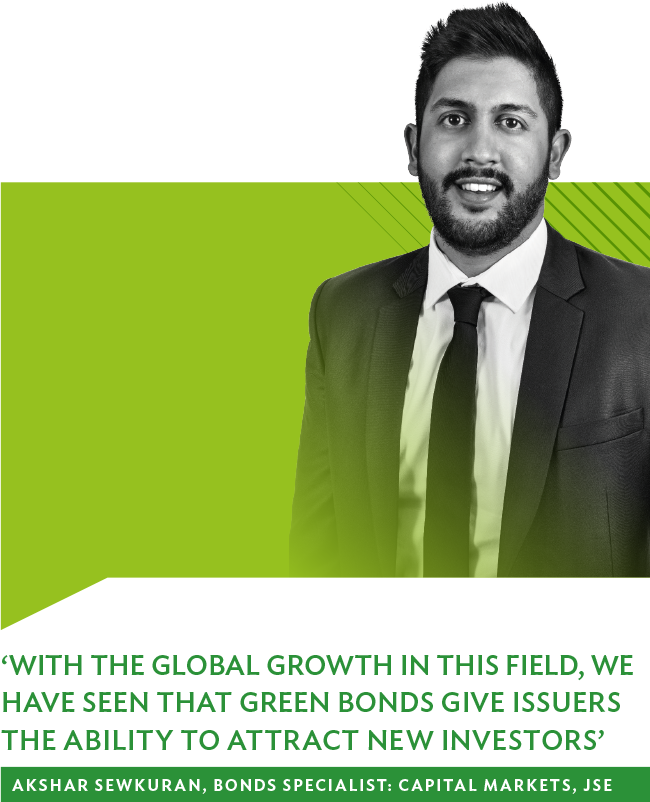 For investors, ‘green bonds have become one of the main outlets for a growing pool of international capital that comes with environmental or ethical strings attached’, says Sewkuran. The Global Sustainable Investment Alliance estimates that $10.4 trillion in assets worldwide involves some form of ESG measurement. ‘Sustainable finance is being forced into the mainstream,’ he says.

‘We believe there is significant potential for growth in South Africa. The Pension Funds’ Act Regulation 28 requires that investments have to include ESG considerations in their investment portfolios – and a green bond is a product that speaks directly to this requirement.’

The JSE has ensured that its green bond listing requirements are aligned with international best practice. ‘With the global growth in this field, we have seen that green bonds give issuers the ability to attract new investors with an SRI or ESG focus and tap growing pools of SRI capital. As more investors see the benefits of green investing through the return profile of these investments, as well as the protection it can offer during volatile periods thanks to its enhanced governance, we believe there is healthy scope for responsible investing to grow in the South African market.’

Sewkuran adds that although the green bond market is still nascent in SA – with many potential issuers unaware of the benefits of tapping the capital markets with a green bond, the JSE ‘expects it to continue developing, with corporates playing a catalytic effect by using the capital markets to fund their low-carbon initiatives and, importantly in the context of South Africa, securing a low-carbon economy that secures jobs and investments’.