Buckle up in the latest SUVs, for a ride to remember

Stanford to Caledon. It’s a stretch of road that’s best done in something fast but comfortable, a blaster with superb suspension, excellent brakes and a four-year-old’s sense of fun and abandon. They didn’t so much as engineer the R326 as throw tar at a succession of hillsides and hope it stuck; undulating is a polite way of describing it.

Cue the ultimate cure for all things COVID – a straining twin turbocharged V8, hiding in the world’s most audacious design of the moment: the Lamborghini Urus. Find the carpet, listen to the bellow, hang on and feel months of ambling to the kitchen in slippers disappear in a storm of relief and exhilaration. Turns out Lambo’s ludicrously named super sport utility vehicle really does represent the very best of what motoring has to offer at the moment. It’s that good.

This year is certainly set to continue to be a horror show for SA, the motoring sector haemorrhaging sales and models as the virus attacks manufacturers as well as citizens. And on top of COVID, junk status just before lockdown meant that, as the country woke from its months-long slumber, it found the price-list pages of its favourite car mags reflecting 15% to 40% increases. The bottom line is, less money means buyers will choose carefully, focusing on resale value, longevity and multiple abilities.

SUVs tick all those boxes, something that hasn’t gone unnoticed by the industry. Manufacturers are falling over themselves to produce SUVs at all price points, from the cheapest car in SA (a mini-mini SUV called a Suzuki S-Presso) to the most expensive (the Rolls-Royce Cullinan). Most manufacturers today have SUVs – or pretend SUVs – at various price points in their line-ups. And many of them are good, to boot.

Globally the movement away from larger cars will not last. As the world repairs and restores, the need will be to explore and press on. Lessons have been learnt though. In the new normal, manufacturers will work ever harder to improve efficiencies – cleaner cars; streamlined production processes; better recycling; and, ultimately, increased investment in the push to electric. Cue the long, open road and a crazy yellow Lambo.

Witness Mercedes-Benz, which has upped its game further down the SUV range and will be launching a new, more capable GLA in 2020. The car is higher, offers better leg room and takes a noticeable design step away from its sister A-Class.

The 1.3 and 2.0 petrol engines suggest a focus on economy, while inside the new language – a digital love story – points to both a younger market and an electric, possibly autonomous, future.

For headlines though, look to Merc’s imminent mid-ranger, the new GLB. We weren’t blessed with the previous incarnation GLK in SA, but it was much loved in Europe. And while the new car owes more to the bigger GLC than the older car, it is much anticipated.

There’s a caveat here though; Mercedes finds itself playing in a size category that has suddenly filled up – and many of the players are both excellent and better value (VW Tiguan, KIA Seltos, Peugeot 3008, Volvo XC40…). Prestige, badge appeal and loyalty will be the defining points of difference if Merc is to slay the mid-sized SUV dragon.

Completing Stuttgart’s trilogy of new SUVs is the great bear, the GLS, aimed at the outsize market, lorded over at the moment by the most-excellent BMW X7. The GLS will play to Merc’s strengths – comfort, grandeur, prestige, luxury – and it’s no surprise that the Maybach moniker will ultimately be rolled out for the GLS, an attempt to win top spot in the bigger-than-yours stakes.

Unseating the big Beemer will be no walk in the park as, along with its superb X3 and X5 brethren, it has a near fanatical following. The Munich company’s SUV bouquet, colloquially known as the xCrew, is made up of seven offerings – X1, X3, X5 and X7 are the foundation fleet, with X2, X4 and X6 adding a sporty element. Clever. X2 adds spice to X1; X4 a sports coupé feel to X3; and X6 a real sense of dynamic venom to X5, especially in M Competition drag.

And with BMW it’s all about the engines. Its SUV success has, in no small part, been due to the sublime 5.0d engine, making X5, X6 and X7 peerless cruisers, economical as well as effortlessly muscular. 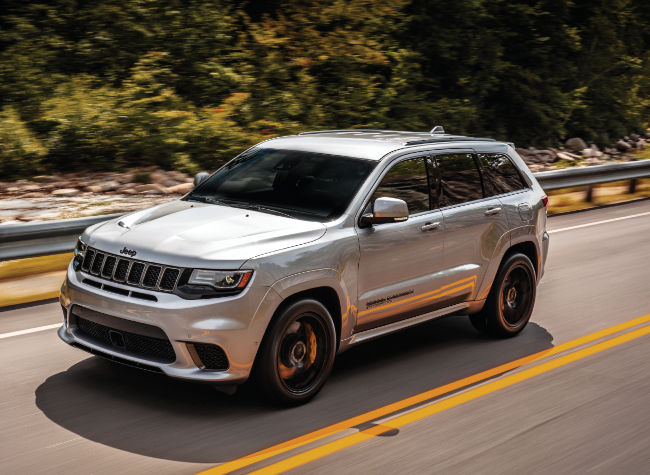 If bigger and faster is the raison d’être, then Fiat has cornered the market with its state-side, leviathan fire breather. Grand Cherokee-based, the Jeep Trackhawk is as fast as a super-car (trust us), brutal as a sledgehammer, wall-flowerish as Lady Gaga at a school concert and rare too.

List prices are just for show – second and third owners are paying well above paper for the privilege. At the heart of the Yankee doodler is a supercharged 6.2-litre V8, good for 522 kW and 875 Nm, deployed to all four wheels via an eight-speed automatic gearbox that has been strengthened to handle the ridiculous amounts of twist. Actually everything has had to be strengthened to deal with the stresses involved. And you feel it on take-off. The supercharger doesn’t so much compress as crush, which is what both spine and eyeballs seem to do as 100 km/h comes up in 3.5 seconds. No turbocharged whistle; rather a sci-fi hurricane as air and fuel are sucked in and the landscape blurs.

R2.2 million is a lot of money for an American car that will inevitably rattle and last only as long as your interest, but the intrigue factor should mitigate against that. 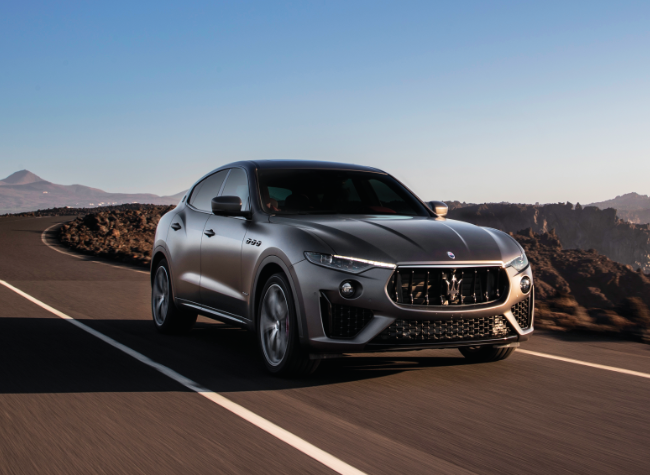 Arguably more intriguing is Alfa’s seductive Stelvio QV, slugging it out in the mud with Jaguar’s F-Pace SVR and Maserati’s Levante Trofeo for the sexiest-SUV crown. All have benefited from time in hair and makeup – the QV adds immeasurably to the standard Stelvio silhouette with bull-like flares, handsome cloverleaf wheels and lower-profile tyres.

Ditto the F-Pace in its slinky SVR drag and Maserati’s Levante, in its limited-edition black and white Trofeo suit. It is pure Italian, right down to its dadi e bulloni.

In the numbers game, the special edition Levante wins out with 427 kW (from the Ferrari-derived V8), followed by the big cat with 405 kW and the Stelvio with 375 kW. But remember, the big Maserati is a limited edition; the ‘normal’ Levante S Gran-Sport manages only 316 kW from its V6 engine.

On the road and in the seat, the three are poles apart – the Jag feels the most conventional, the best over long distances and probably the easiest to live with. It’s also the most capable off-road and came through a gruelling 2 000 km trans-Karoo journey with flying colours. The Maserati is the dandy, a multitude of overindulgences, from overstuffed dash and seats to the dizzying array of instruments.

Stelvio, though Italian, is altogether calmer, a well-organised, tactile place and beautiful to boot. And when the horses are let out, Stelvio QV conjures il diavolo, a masterful combination of verve, grip, feedback and instinct. What a lovely car to drive quickly. 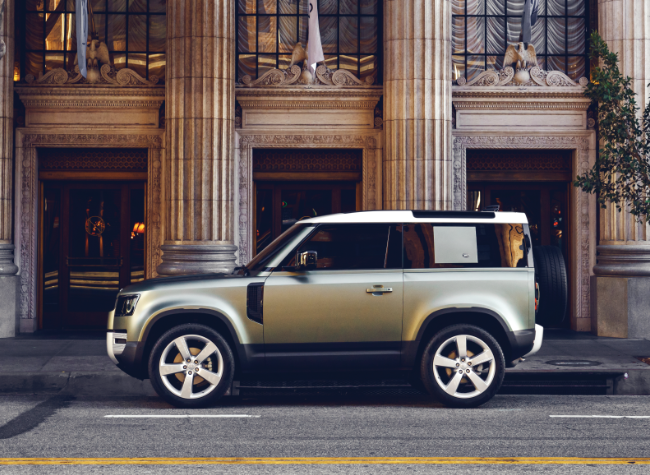 Nothing signals the evolution of the SUV quite like the recently introduced Land Rover Defender. The older model could not, by any stretch of the imagination, be termed a sport utility vehicle, but the newcomer most certainly can. Now only the Toyota Land Cruiser roams the impenetrable wastes of the true wilderness.

The jury is still out on the new Landie, mostly because not many have had the privilege. Word is that it’s more Range Rover than Land Rover, which is good and fine, awesomely capable but … just not a Defender. Prices will scare the children too, but then that’s par for the course these days.

Leading the armada of trendwagons is Volvo, which has done a masterful job of reading the zeitgeist, delivering a duo of design-heavy beauties in the XC40 and larger XC60. Both reference the bigger XC90 yet have characters all of their own. The XC40 particularly has won many friends for its ease of operation, driving enjoyment and ability on the dirt. Resale values are good too, traditionally a thing Volvo has battled with.

Equally à la mode is Audi, walking a tightrope between sporty and practical. SUVs are traditionally less than athletic – even the fast ones – and the Ingolstadt company has needed to proceed carefully if it is to protect its reputation as the purveyor of effortlessly sporty cars. So far so good. The Q2 has been well received, as has the pretty Q8, Audi’s first foray into the world of the SUV coupé. New this year will be the Q3 SUV coupé, to go head-to-head with BMW’s X2.

International reports have been positive, despite the inherent compromises a sports SUV suggests (blunting the sports car’s performance, reducing the SUV’s space). Hopefully the Q8’s kudos will rub off on the Q3.

Speaking of which, the long-awaited SQ8 should arrive towards the end of the year. The VW AG Group’s other launches in 2020 include the Volkswagen T-Roc (a T-Cross with improved off-road ability) and the Audi Q7’s mid-life reworking, towards October. Cousin Porsche will also add a GTS model to the latest Cayenne.